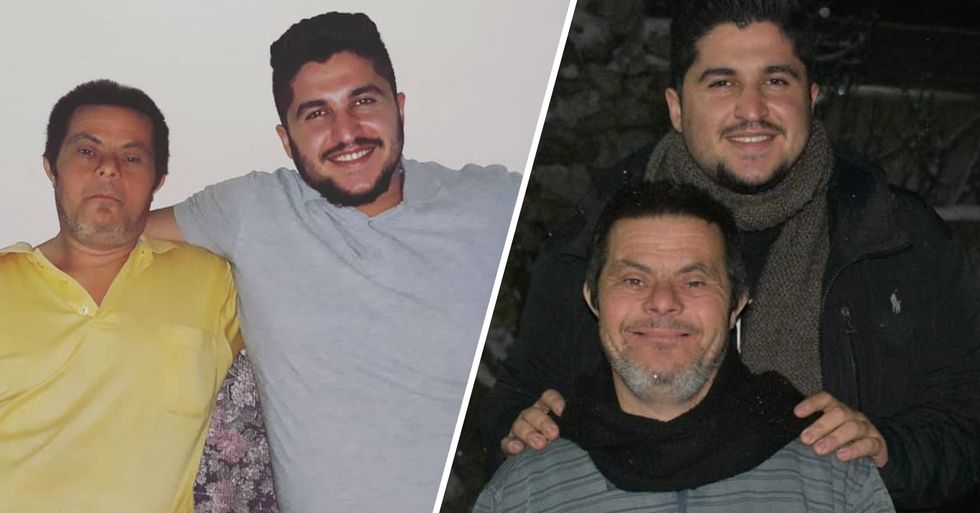 If you're having a bad day, you'll perk right up when you read this story.

A man has gone viral after sharing a heart-melting story about being raised by a father with Down's Syndrome - inspiring others and giving them hope for their own family members with the condition.

Keep scrolling to hear about their touching story and watch the clip.

Down's syndrome occurs when an extra copy of a chromosome is present at the time of conception.

Specifically, a full or partial copy of chromosome 21.

It's currently the most common chromosomal disorder.

But many people with Down's syndrome live full, independent lives.

And one man's touching story proves this.

Sader Issa, from Syria, has gone viral after a video surfaced of him sharing a touching story about his father, Jad, who has Down's Syndrome. Keep scrolling to check out the clip for yourself.

According, to the Down Syndrome Association, fertility in people with the condition is generally lower.

And if one parent has the syndrome, the chances of the child inheriting it are around thirty-five to fifty percent.

He didn't inherit the condition.

Sader, who is a dentistry student, says his dad is his "biggest support."

And describes him as a “father a husband and family leader."

Sader admits that his family unit can be hard to comprehend for many people.

But that being raised by a parent with Down's Syndrome has given him “all the love and tenderness that anyone can offer."

Sader has received floods of questions over his parent's marriage.

Especially given the fact that only his father has the condition while his mother doesn't.

But he says they are both well suited and "very simple but loving and caring people."

“I believe if the two partners were on the same page, then why not get married? They are intellectually suitable for each other; very simple but loving and caring people," he explained in an interview with Metro UK last year.

He credits many of his achievements to the love and care from his dad growing up.

“Throughout my life, he has been the greatest support for me when I needed it," he said.

Many people are led to believe that people with Down's Syndrome are completely infertile.

"When people search Google, they find that men with Down’s syndrome (DS) are infertile, so they get confused when they hear about us," he said. “I know six more cases of fathers with DS, and the studies that show the fertility of men with DS are very few, so we cannot say these men are fertile that easily."

In spite of living with the syndrome, Jad worked at the local mill factory.

And has been supporting his family for over 2 decades.

And he's beaming with pride for his son.

And always tells people his son is a doctor. According to Sader, his father’s “eyes are filled with joy and satisfaction as if to say: ‘Yes, I have Down’s syndrome, but I raised this man and did everything in my power to make him become a doctor and help others.’"

And he says if he had a choice, he wouldn't change anything about his dad.

He describes his parents, who are still going strong after more than twenty years, as "having a life full of love, simplicity, and humility in all respects."

Their story has been inspiring others.

"We really appreciate hundreds of parents who have reached out to me and told me that we gave them hope for a better future for their kids," he said.

And, of course, Sader and his father remain extremely close.

Their bond is truly heartwarming.

Interested in another story that will tug at your heartstrings? Keep scrolling to learn all about a dad who has adopted 5 sibilings.