Who Is This Man Sitting in the Front Row of the Emmys? | 22 Words 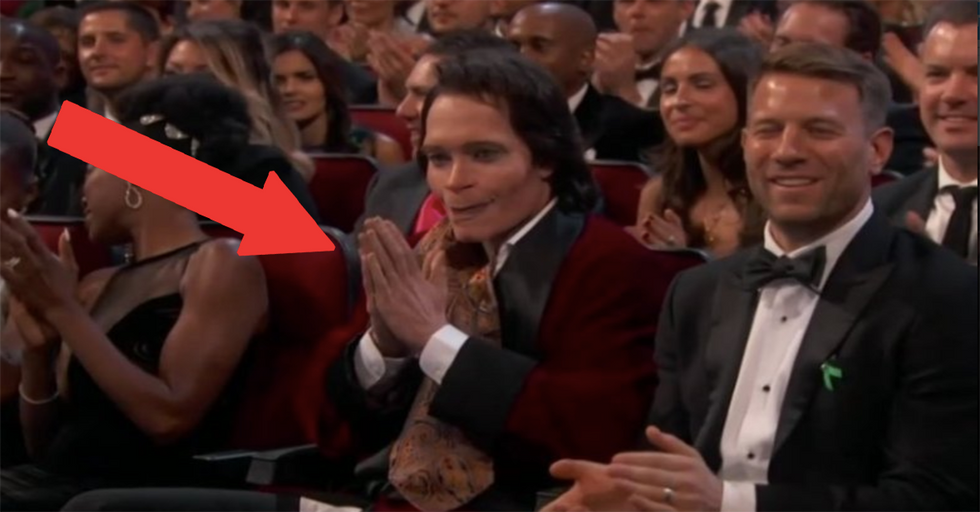 Who Is This Man Sitting in the Front Row of the Emmys?

The 2018 Emmys Awards are underway and the award show is going off without a hitch! The Marvelous Mrs. Maisel is pretty much sweeping the awards. Colin Jost and Michael Che are just the right amount of edgy. Betty White is alive and kicking and still has the jokes. The stars are out tonight, they are drinking in their seats, and oh boy they are looking spiffy.

But then, something strange happened. A man was spotted in the Emmys audience who at first, was fairly unrecognizable. And honestly, he was also a little off-putting and bizarre looking. Who is this mystery man who seemed to appear out of thin air in one of the very first rows of the 2018 Emmys audience? You may recognize him if you are a fan of a certain show... Let's just leave it at that. We have the answers. And now, we will explore this mystery man at the Emmys.

Who is this mystery man?

People all over Twitter started posting photos of this strange-looking man who appeared in the audience during the 2018 Emmys broadcast. So, who is he?

Well, if you're a fan of the show Atlanta, you might recognize him.

Teddy Perkins is a character in a totally unnerving episode of Atlanta. The character is played by Donald Glover, and the episode was directed by Hiro Murai. The episode follows Darius trying to pick up a piano at the home of an eccentric character, Teddy Perkins (Donald Glover in whiteface). It's dreamlike and creepy beyond belief.

And apparently, Donald Glover decided that Teddy Perkins deserved to show up at the Emmys.

No one is quite sure whether this is actually Donald Glover, who would have had to do a pretty quick change of clothes and makeup, or someone sitting in his place, but either way, Teddy's appearance at the Emmys certainly ruffled some feathers.

Of course, fans of Glover and the show were totally on board with Teddy's mystery appearance.

Surprised? Sure. Creeped out? Totally. Teddy Perkins is a strange, villainous character in the show and a pretty direct reference to Michael Jackson. It totally shocked fans to see him appear in Glover's place during the Emmys broadcast.

But the craziest thing is...

either donald glover changed really fast from teddy perkins or it was childish gambino as teddy #Emmys https://t.co/SW8MqOZYPQ
— germery (@germery)1537233061.0

As quickly as Teddy Perkins appeared, he disappeared and was replaced by Donald Glover out of costume. So...did Glover make a quick change or what? Why did he decide that Teddy Perkins needed to show up tonight? What do you think?