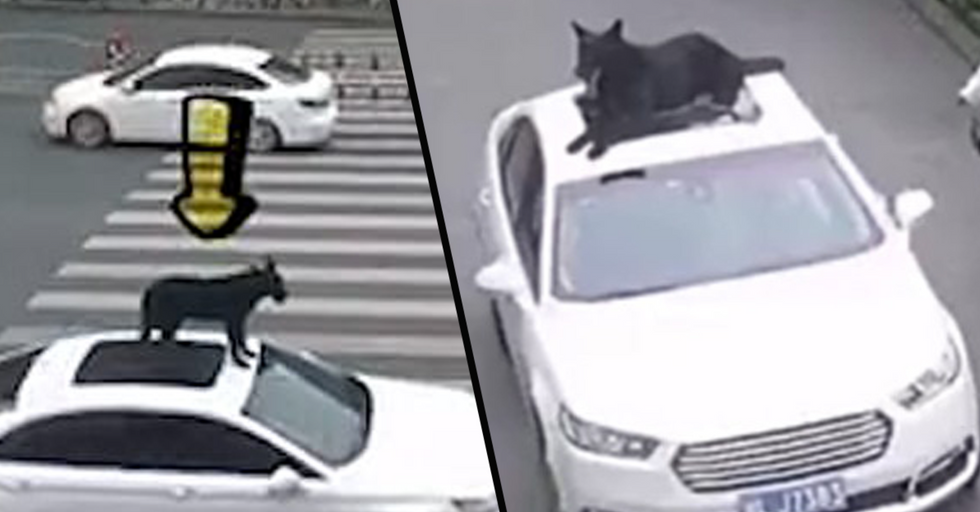 People have some crazy ideas at times. But this could be at the top of crazy ideas.

When one man couldn't fit his dog in the car, he decided to put it on top instead.

Keep reading to find out what happened...

Now we all have bright ideas sometimes.

And some go well.

And others not so much.

But there somethings that people do and we aren't sure how they ever thought that it would be good.

And this is certainly one of them...

As one man decided to put his dog on the top of his car.

Yes, it really did happen.

Keep scrolling to see the pictures.

The black dog is sat on top of the car as it drives down the road.

And at one point it even stands up.

As they head down the busy streets of Leshan, in the south-western Sichuan Province, China.

As the car travels down the streets, pedestrians look on.

At one point the dog even moves to sit, blocking the window screen.

Before it then makes it way back on to the roof.

Completely unphased that it's moving.

Now, for what reason would you put your dog on the roof you might ask?

Well according to the Daily Mail  driver later told police that he had no other option.

The unnamed driver apparently was unable to put his pooch inside the car as there was no room on the back seat.

But to make it even stranger...

He claimed there was no danger of the dog falling onto the road.

As apparently he is 'well trained'.

Now, he must be extremely well trained to sit on a car roof unphased.

Although, despite this claim that it is safe.

The driver did have to stop at one point in order for the dog to rebalance itself.

As you can imagine, the sight of it caught many people's eyes.

And someone did eventually tip off the police.

Eventually, the dog's owner was tracked down and quizzed about the bizarre situation.

He reportedly said: "I was worried that the dog would suffocate being inside the trunk, but I had stuff piled in the backseat that day."

A police officer reportedly then asked: "How can you make sure that it wouldn't jump off the car?"

To which he replied, "That dog is well trained."

Also adding, "After that day, I thought that something wasn't right about this."

Let's hope he won't be doing it again.

For the poor pooch's sake! For more dog content, scroll on...