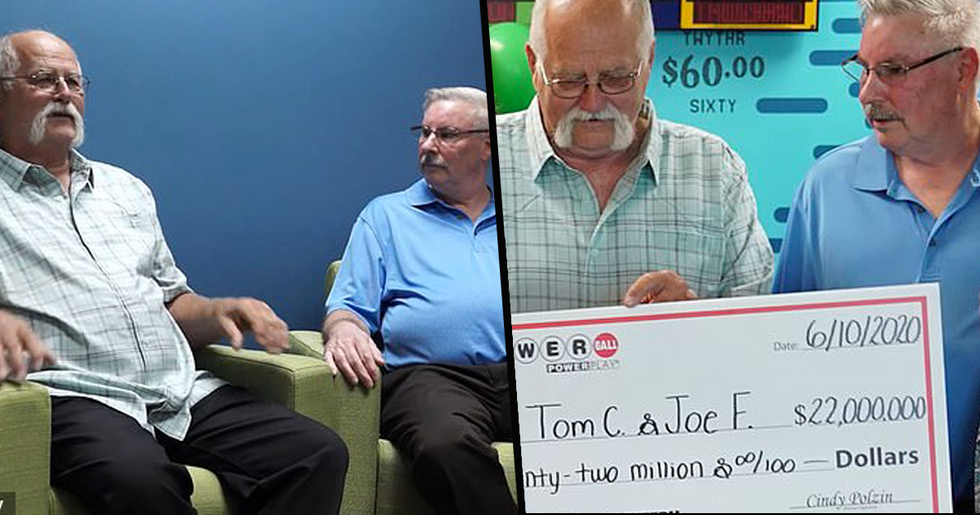 Nothing beats the feeling of winning something, even if it's the smallest amount...

Keep scrolling to find why one winner did...

Winning the lottery is usually only a dream for many...

Let's be real honest with ourselves, the chances of winning the lottery are probably a million to one.

But, there are a lucky few that it happened too.

And for them, that dream has become a reality.

Just imagine what could be done with that much money...

The list of things that could be done if you won that sum of money is endless.

A Lamborghini? If you can think it you could probably buy it.

$6 is totally worth winning a couple of million, right?

But the question is...

If you won would you split it?

Sure, you would probably help out your friends and family.

Do a good cause with it.

But, would you actually split the money?

Say with your best friend?

What about if you and your friend agreed to share a jackpot on a handshake over 30 years ago?

We think most people would pretend that they had forgotten about it.

But that's not what one man did...

Instead, he showed ultimate friendship goals.

But instead of keeping it all, he decided to stick to his word and split it with his friend.

Having brought lottery tickets for years, buying this one from Synergy Coop Exit 45 gas station and convenience store in Menomonie probably didn't feel any different.

So you can imagine the shock when Cook realized that he had the winning ticket whilst sat having breakfast with his wife.

"'It was quite an experience when I read those first two or three numbers,"

During a video interview, he added, "I kind of froze and handed them to her and she froze."

Following his realization of his winnings, Cook insisted that he honor his handshake of 30 years, and call his lifelong friend, Tom Feeney, to share the news.

Back in 1992, the 2 men agreed when the game started that if either of them won they would split it.

And Cook did just that.

As he said, "A handshake's a handshake."

In the video interview on Thursday when the winnings were announced, Feeney recalled his reaction to the phone call.

His question to his friend was, "'re you jerking my bobber?"

Now both men and their wives have had the time to adjust to the news of their millions they have decided what they will do with it.

Cook, worked 2 weeks' notice in his job before finishing whilst Feeney was already retired after working at an area fire department.

Despite having millions of dollars each, neither of them have elaborate plans to spend the money.

Instead, they simply want to spend more time with their families.

Cook said, "We can pursue what we feel comfortable with. I can't think of a better way to retire."

You can watch the interview with the 2 men here. Keep scrolling to read about one man who had to split his lottery win and wasn't very happy about it...