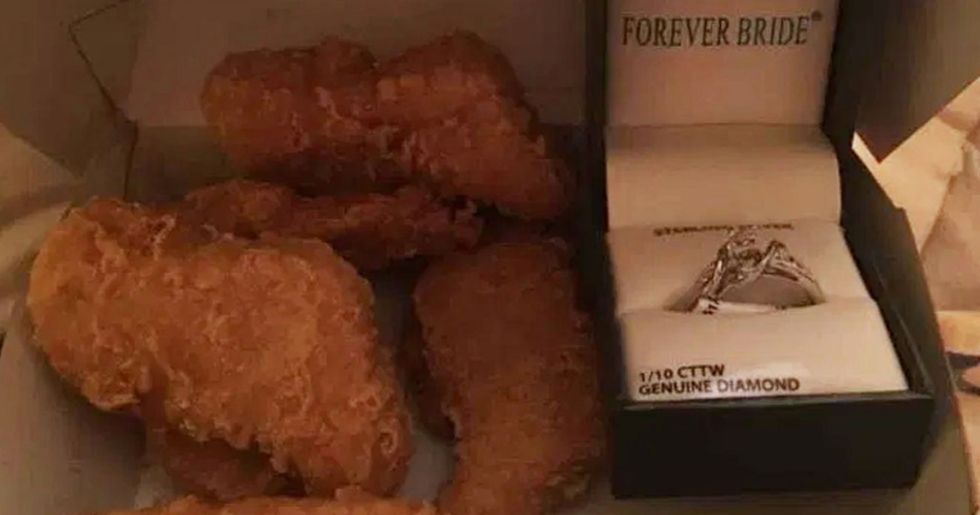 Proposals are a big deal, right?

Or at least they can be.

I guess deciding to be with someone for the rest of your life, accepting them and agreeing to sign documents that promise you'll stick around is a pretty serious thing.

This is why people believe getting the proposal right is very important.

One man's alternative proposal technique has taken the internet by storm.

Continue scrolling to read the adorable story, along with some other uber-sweet proposal stories...

Proposing is harder than saying the 4 magic words.

Just asking someone, "Will you marry me?" isn't always enough.

Some people won't propose until everything is perfect.

Including their partner's nails... I mean you don't want to propose to a girl with shoddy nails, right? Anyone that doesn't believe me, trust- I wrote an entire piece about this very subject many moons ago.

Some people believe in asking for the father's permission.

I mean, some might argue it's an outdated tradition and that no father owns his daughter, but some people think it's a sign of respect or whatever.

For some, the proposal is important. They suppose people will ask them how they came to be engaged for the rest of their lives so they want to have a corker of a story... you know, for dinner parties and stuff.

aka, Public Displays of Engagement are also very popular. Whether they're at a sports game, a busy restaurant, a karaoke, some people love making their engagement a public display.

Maybe don't propose to your partner at an Adele concert...

I don't know about you but personally, Adele just screams break-up. With this in mind perhaps the fan who decided to get Adele to help her propose to her boyfriend may have changed her plan.

Well don't worry hon, go set fire to the rain and chase some pavements with your new BFF Adele, you don't need him.

The ring is an important part of the proposal.

Depending on your own unique style, what you look for in a ring will be different.

How you deliver the ring is also important.

I mean you can't exactly just throw the ring at your partner, can you? That's what you do when you break off the engagement, duh.

It seems a lot of girls share a similar dream...

According to Twitter, there are a whole host of girls that would like to be proposed to via chicken nuggets.

All the cool kids are doing it...

It seems the modern dream consists of being proposed to by getting your beau to get you some chicken nuggets and a ring. These girls want the world!

What's so romantic about chicken nuggets?

And what is this intrinsic link between professing your love and sharing delicious nugs?

Are chicken nuggets an aphrodisiac?

I mean from the number of people that are deciding to get hitched for life after tucking into these bad boys, you'd think something was going on.

Chicken is unanimous with love...

I guess we've just got to face the truth. No wonder I was single for so long when I was a vegetarian.

Mcnugget proposals have been a thing for a while.

Going back to 2017, a young couple from Illinois made headlines across America for their "wacky" proposal. Kristian Helton, sixteen, proposed to his girlfriend, Karsyn Long by writing a sweet message in her box of nugs.

After Kristian's romantic proposal, Karsyn, of course, said yes. Whether they actually made it down the aisle remains to be seen.

The popularity of poultry-related proposals has continued...

If you’re planning to propose over Thanksgiving and you don’t hide the ring in the turkey cavity you’re a coward
— Charlotte Wilder (@Charlotte Wilder)1574868551.0

Strangely something about hiding your ring in a bird, in a box of fried nuggets (or however else you want to do it) remains pretty popular.

The latest chicken nugget proposal to hit the airwaves comes again from the U.S. Maybe it's becoming an American tradition...

It was a whole thing

Posting their story on the Facebook page, That's It, I'm Proposal Shaming the lady, who remains anonymous told the world. Not that I think she was "shaming" her now-husband, I think she thought it was sweet.

One person called it low key funny and as cute as fudge... which you know, I guess I could agree with.

I guess nuggets are consistent, comforting and make you feel care-free. What more could you want? Saying that I think there's one proposal that knocks all nugget ones out of the water...

This proposal is top-tier cute.

Both these guys had no idea the other had planned to propose that day. Unbelievably cute. Continue scrolling to read more proposal stories... Like the one when a girl disguised herself as a bush to capture her sister's special moment. Enjoy!