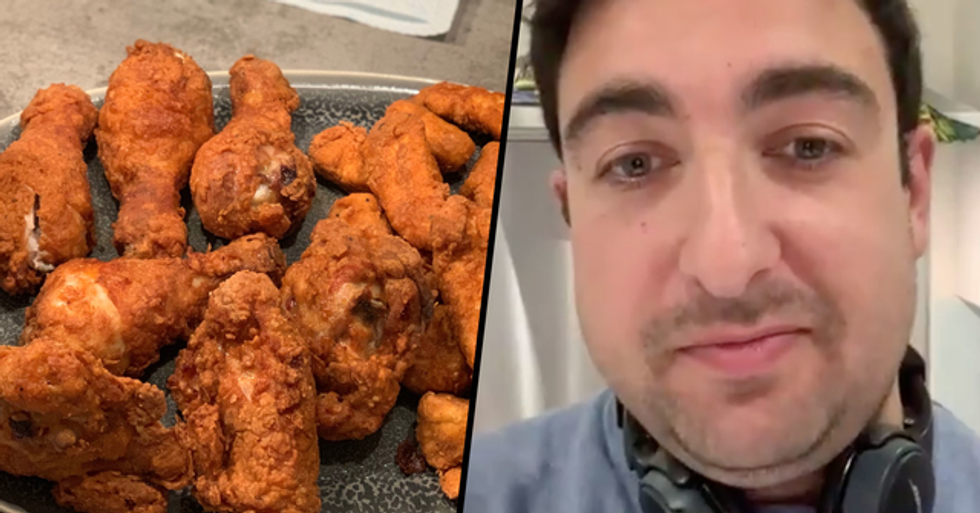 A KFC fan has this week achieved the impossible by replicating the fast-food chain's notoriously secretive Original Recipe chicken... After eighteen months of failed attempts, of course.

Keep scrolling to hear just how he achieved such an accomplishment and, of course, to find out the alleged eleven herbs and spices concoction for yourself...

Out of all the big mysteries in life...

The secret recipe for KFC's iconic fried chicken is by far the most sought-after.

For decades now, the Colonel has kept his chicken recipe close to his chest.

Though KFC was incorporated in 1955, Colonel Harland Sanders had actually been perfecting the recipe in the decades prior.

As a young man, Sanders had always been a "dab-hand" at cooking...

And would enjoy making traditional, American dishes that his mother used to serve him, which included pan-fried chicken, country ham, fresh vegetables, and homemade biscuits.

But it was his fried chicken that really stood out.

And, in the early 1940s, shortly after opening his first restaurant and motel, the newly-appointed Kentucky Colonel had finally perfected his "original recipe" chicken.

Thus, the KFC we all know and love today was born.

The restaurant was an instant success, and its growth across the country was rapid.

In the years following on from its debut, KFC restaurants began popping up all over America and, slowly, the rest of the world.

People were hooked on the Colonel's chicken.

And, as a result, KFC today stands as one of the most successful fast-food restaurants of all time with over 23,000 outlets all over the world.

And the predominant reason for this?

But, to this day, his original recipe remains one of the world's best-kept secrets.

The Colonel's lips remained sealed regarding his infamous recipe right up until his death in 1980.

No one knows the true original recipe.

And the only information the Colonel ever revealed was that it contains "eleven herbs and spices", and that it is made of ingredients that "stand on everybody's shelf".

Obviously, thousands of people have tried their hand at recreating the Colonel's delicious mix of herbs and spices themselves...

But very few have even been close to fully replicating the Original Recipe Kentucky chicken.

After eighteen months of trying to recreate the KFC recipe at home, and clearly bored in self-isolation, one man has come forward to claim that he has cracked the herby, spicy code.

Twitter user, Dan Fell, took to the social media platform to boast about his achievement...

And to share the alleged Original Recipe with the world once and for all.

First, he shared a photo of his finished result...

Which, I have to admit, really does resemble the real deal.

He insists that, after months of attempting the notoriously secretive recipe...

His version now has a "4 out of 5 strike-rate on the 'mate, you really can't tell the difference' scale." That sounds pretty reliable to me.

So, I know what you're all thinking...

What is the damn recipe?!

Well, here it is, folks - The alleged Original Recipe.

In a wonderfully dramatized video, Dan used... 5 cups of plain flour, 4 tablespoons of paprika, 2 tablespoons of white pepper and garlic powder, 1 tablespoon of ground ginger, mustard powder, celery salt and black pepper, half a tablespoon of oregano and thyme and one-third of a tablespoon of sea salt. Eleven herbs and spices and all available to buy in your local supermarket, just as the Colonel had promised.

Such as how hot to have your oven, the appropriate temperature for the chicken, and how long to cook and fry.

But he explained how the flavor is dependent on several different factors...

Is anyone else suddenly really hungry for KFC?

Well, with all KFC restaurants closed until further notice and Dan's pretty legit-sounding recipe, there's nothing stopping you from stepping into the Colonel's shoes for the day. Happy cooking! But if you think this chicken is too unhealthy for you, worry no more. One man ate KFC for an entire week and actually ended up losing weight. Keep scrolling for the full story...