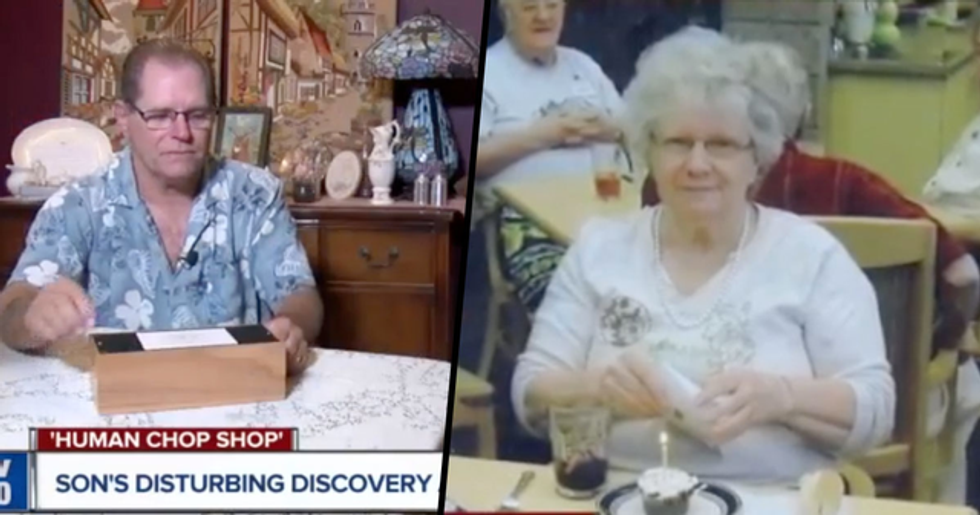 When you think about donating the body of a loved one to science after they've died, you'd like to imagine that their lasting legacy will go towards curing awful diseases, aiding important medical research, or even saving the life of someone else, right?

What you do not picture is their body being used as a dummy in military exercises and explosions - pretty much every person's worst nightmare after the passing of someone they loved.

However, this nightmare has sadly become a reality for one Arizona man. After passing away from Alzheimer's disease in 2013, Doris Stauffer's body was donated by her son, Jim, to the Biological Research Center, all in the hopes that her body could be used to help to find a cure for the devastating brain disorder.

But Jim recently made the horrific discovery that her body was instead used by the U.S military for bomb impact testing, not medical research. Understandably, Jim was repulsed by his discovery and, alongside several other devastated families, is now suing the research company.

The Biological Research Centre doesn't have the best track record.

You may have heard, in 2014, the BRC, which takes in donated corpses for medical research, found itself in the middle of an investigation after its owner, Stephen Gore, was alleged to have been illegally trafficking and selling donated bodies for profit.

The FBI raided the Arizona facility.

Grizzly details of the raid emerged last week, instantly making headlines and horrifying the world, as it emerged that investigators had discovered buckets of human body parts, as well as human heads sewn onto different bodies. Disgustingly, one agent recalled that there was a male torso “with the head removed and replaced with a different head sewn together in a Frankenstein manner." The head was from a female.

The number of corpses discovered was vast.

So vast, in fact, that officials actually struggled to properly handle all of the retrieved body parts. Authorities ended up filling 142 body bags, with one bag holding body parts from at least thirty-six different people.

The facility had been storing tons of body parts.

Body parts had been piled on top of each other with no apparent identification to indicate what bodies they came from. And, in total, a harrowing ten tons of frozen human remains were found – made up of 1,755 total body parts that included 281 heads, 241 shoulders, 337 legs, and ninety-seven spines.

It has now been alleged that the company had been secretly selling donated corpses for profit, without any of the family's knowledge or consent. According to ABC, the FBI said that BRC was making a profit from dismembering and selling the remains without donor consent. "I've never seen anything so horrific, to take advantage or people who are grieving and vulnerable," a spokesperson explained.

The company has been making a profit from donated corpses for years.

The current lawsuit alleges that the bodies were sold and shipped overseas for profit to unknown entities, body parts were stored with no dignity or respect, and the corpses were used for purposes other than science and medical research. All of this was done without the consent of the deceased families.

The victims have started to speak out.

Jim Stauffer, from Pheonix, Arizona, has spoken of his horror and grief after discovering that his mother's corpse was sold for profit by the BRC, instead of being used for medical research as she had wished.

Jim said that he donated the body of his mother, Doris Stauffer, to the for-profit Biological Resource Center after she died, aged seventy-four, in hospice care after a long battle with Alzheimer's disease.

Jim thought that his mother had been used to research a potential cure for the devastating brain disease.

Doris had Alzheimer's despite not carrying the gene that is frequently associated with the disease, and doctors thought that studying her brain could give them more information about whether the disease had mutated. Jim donated her corpse to the BRC only because her neurologist was unable to take the body.

Instead, her body had been sold to the U.S. military.

For a profitable $5,893, according to Reuters. Bodies sold to the U.S. military are used as crash test dummies, which means that they are used in experiments involving exposure to destructive forces, e.g. impacts, crashes, ballistic injuries, and blasts.

Doris' body was used in a "blast test."

Blast tests are typically designed to offer an insight into what exactly happens to bomb victims. Stauffer learned that his mother's body was "supposedly strapped in a chair on some sort of apparatus, and a detonation took place underneath her to basically get an idea of what the human body goes through when a vehicle is hit by an IED."

The test was reportedly designed to simulate a real-life explosion.

And was ultimately carried out to help protect U.S troops in places like Iraq and Afghanistan from roadside bombs. Though the Army had considered using mannequins, the impact of explosions under a vehicle couldn't be tested effectively or authentically while using them, so real human bodies were the only resort.

But Jim had no idea that his mother's body had been sold to the military.

“I feel foolish," he explained to ABC. “Because I’m not a trusting person, but in this situation – you have no idea this is going on – you trust. That trust is what they feed on."

He had specifically told the center to not sell her body to the military.

According to the Reuters investigation, the center's donor consent form asked whether the body could be used on "non-medical projects that could involve exposure to destructive forces e.g. impacts, crashes, ballistic injuries, and blasts."

Stauffer said that he ticked "no" on the form.

Yet the BRC went ahead and did it anyway.

The investigation in 2016 discovered that the center had cremated one of Doris Stauffer's hands, and then sent those ashes to her son. The facility then sold the rest of her body to the taxpayer-funded U.S Army research project.

And the Stauffers aren't the only victims.

Military records show that at least twenty other cadavers were also used in blast tests and experiments without the knowledge or consent of their grieving relatives.

U.S. Army officials claim that they had no idea about the scandal.

Army officials have insisted that they had not seen the consent forms and had trusted the Biological Resource Center's word, adding that Army policy was to not use bodies if the family had not consented for them to be used for military use.

They claimed that the BCR had reassured them, saying that the families had agreed for their relatives' bodies to be used in such experiments.

The company is now facing a number of legal charges.

Stauffer has now joined thirty-two other plaintiffs in suing the center, accusing it of deceiving them about what happened to their family members' bodies. The case is set to go to trial on October 21st, CNN reported.

The owner of the facility, Stephen Gore, has already been arrested.

Initially, Gore pleaded guilty to fraud, aka, he admitted to misleading customers by shipping them contaminated specimens, but not for actually selling body parts. Gore had told Reuters in 2016 that he tried to honor donors' wishes and sent consent forms to researchers when asked.

"It is my belief that we did what we could to honor the donors' consent as we understood it," he told a judge. Gore noted that the for-profit body-donation industry had "no formal regulations to look to for guidance."

"I believe that many times I was simply overwhelmed and I tried to do the right thing but often did not," he said.

Gore will come face-to-face with his victims in October.

Though Stauffer doesn't believe that he will ever move on from this horrific case. "I don't see a pathway of ever getting past this," he said. “Every time there’s a memory, every time there’s a photograph you look at, there’s this ugly thing that happened just right there staring right at you." Here's hoping that Stauffer and the many other victims will finally get the justice that they deserve in October, when Gore is made to face up to the consequences of his actions. The FBI played a hugely important role in cracking down on the atrocities happening in the "Human Chop Shop." If you want to know a little more about the work of the FBI, keep scrolling to find out twenty undercover facts about the intriguing organization.