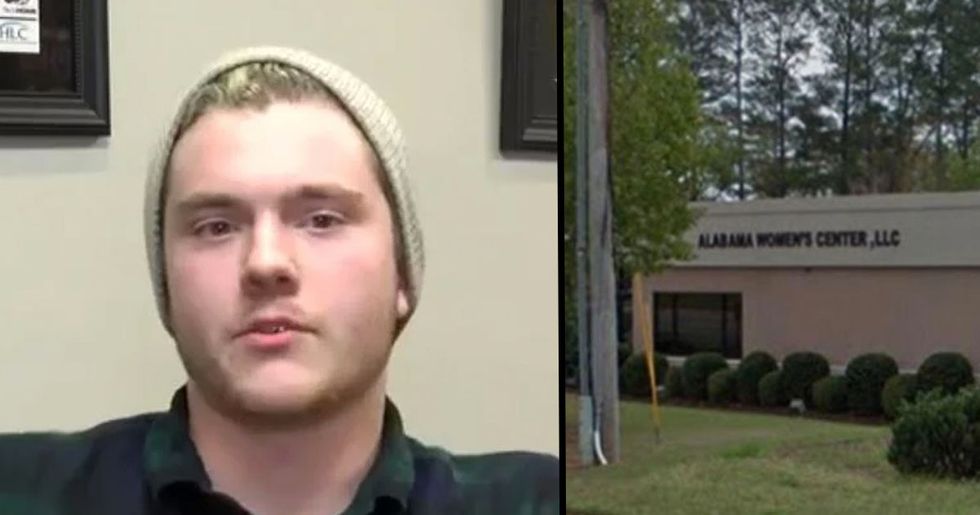 Man Sues Clinic for Aborting Girlfriend's Pregnancy Without His Consent

Abortion is an issue that divides people around the world, regardless of their background. It is impossible to know what the right answer is. But that doesn't stop people fighting about it, and nor should it. It is a very serious matter, and not one that is ever entered into lightly.

But one man has taken a different stance to many and is trying to sue an abortion clinic for carrying out an abortion. The woman wanted it and the man didn't. Does he have a case? Well, that depends on what state he lives in.

After 2018's year of the woman, I think it's safe to say that females across the globe are fighting back to raise awareness against bias and to take action for equality. It's time for us to acknowledge that 'A balanced world is a better world.'

Around the world, people are celebrating women and advocating for campaign #BalanceForBetter.

Most recently with International Women's Day, which is a day in which we recognize that women are still not treated as equals to men in any country in the world.

But not everyone seems to be on board. At least one man is fighting against women's rights this week.

While most of the world reflects on women's achievements and looks at what they can do to further improve, one man is doing the exact opposite. He is trying to limit women's rights just as the women's movement is starting to gain traction.

Ryan Magers is a nineteen year old boy from Alabama. Two years ago, Ryan's girlfriend at the time got pregnant. She was aged seventeen or eighteen, although his lawyer was uncertain of her exact age.

Ryan's girlfriend decided to make an important choice regarding her body.

Despite Ryan's requests against it, she ended up having an abortion.

Ryan claims the abortion took place without his consent.

So regardless of stance on abortion.... Not his body for 9 months pregnant plus the up to two years recovery post b… https://t.co/Qub3uORZil
— Vanessa Brumage (@Vanessa Brumage)1551943265.0

Ryan says that Alabama Women's Center provided his ex with an abortion. He says that he repeatedly asked her not to, but she went ahead with it anyway.

Ryan wants to sue and represent the estate of the unborn fetus.

The fetus was aborted at six weeks, but Ryan wants to represent its estate and sue on its behalf. Madison County's Judge Frank Barger granted Ryan the ability to do this. He has recognised the fetus as 'a person with rights.' It is the first time that this has ever happened.

So can this happen? Some new laws are being brought into play.

In the mid-term elections in November, Alabama amended its constitution. It now recognizes 'the rights of unborn children, including the right to life.' As a result, Alabama became the first state in the USA to add a 'fetal personhood clause' to its constitution.

What does this law mean?

The new law means that the fetus has a right to life. This means that people can argue (and sue) against a fetus' termination. The idea behind this law is that a woman's right to an abortion is no longer protected. Crucially, women and medical centers can come up against issues following a termination.

In Alabama, the amendment to the constitution passed with less than 60% of voters. In West Virginia, the anti-abortion measure was passed with just 52%. Not only does it mean that people's right to have an abortion is no longer protected, but it also prevents Medicaid dollars being used for it within the state.

The language in the new laws could be misleading.

Okay not that I would have expected better from @FoxNews , but if the abortion happened at 6 weeks, then this pictu… https://t.co/8XWK2xvQG9
— SarahLaGringa (@SarahLaGringa)1551975178.0

There is a concern that the language used for the legal amendments could somehow end up criminalizing pregnancy. It is possible that it could be misinterpreted with regard to miscarriages, or the actions of someone who is pregnant.

El Salvador should be a cautionary tale for us all.

In El Salvador, abortion is completely illegal. This includes if the woman's life is in danger, or if the fetus has fatal congenital abnormalities. They claim it is because the fetus has a right to life from conception. Sound familiar? If the pregnancy ends before the full forty weeks, even due to a still-birth or a miscarriage, women can still be prosecuted and sent to prison. Some women have even faced thirty years in prison due to 'aggravated homicide.'

Abortions always have and always will occur.

Changing the laws will not prevent abortions. They will simply prevent safe abortion and force people into unsafe situations. There are 26 countries in the world where abortion is banned completely. But abortions still happen. In El Salvador, for instance, at least 19,000 abortions took place 2005-2008, despite the fact that they are illegal and women face prison time.

The statistics are horrifying.

why are you #prochoice? #roe "RT @myownsatellite: Because no rape victim should be forced to carry her attacker's baby."
— UniteWomenOrg® (@UniteWomenOrg®)1358982038.0

The impact of the law is real.

Every year at least 23,000 women die from unsafe abortions. Meanwhile in India, although abortion is technically legal, the stigma around it is a leading factor for why 78% of abortions take place outside a health clinic.

There are two sets of people that discuss abortion. One set is pro-choice, and the other calls itself pro-life. Essentially, pro-choice people believe that the woman has a right to choose what she does with her own body. As such, they think that abortion should be legal. Pro-life people disagree.

People who are pro-choice believe that, while a fetus could not survive outside of the mother's womb, it is the mother's choice for how she deals with her own body. Therefore, they believe that the government should not interfere with their bodies.

The pro-life people, also known as anti-choice, argue that even when the life is not yet developed, and couldn't survive outside of the womb as it is not yet human, it should still be protected by the government. This means that they think that the government should be able to prohibit abortions.

No. The argument is not about once they have developed, it is about when it is still a fetus and has not yet become a person. Most people in the world agree that once the fetus could survive outside of the womb, it cannot and should not be terminated. For this reason, almost all countries have a limit based on how long the woman has been pregnant for.

Isn't pregnancy a result of a loving couple?

Pregnancy can happen for a number of reasons. Sadly it is not always because two people are in love and want to start a family. Women can become pregnant if they are raped or abused. It can happen when they are too young, or when their situations are unsuitable for raising a child. There could be issues within the couple, or within the lifestyles that make it unsuitable.

Pregnancy is massively stressful on the body. Not only does it go through huge physical changes, but it also has an enormous impact mentally. There are times when a pregnancy puts the woman's life in danger, or can cause long-term damage, whether that's mental or physical. It can also be a difficult process for the baby and sometimes they can be suffering from something fatal, before they are even born.

Abortion is not something women enter into lightly.

Women do not usually undertake abortions lightly. It is an incredibly stressful event to happen and will stay with the woman for life. Furthermore, it is not usually just because they choose that. There are usually several factors at play. One study showed that 74% of women in the USA who had an abortion said that they did so because they couldn't afford to have children.

Why do men get to decide what happens to a woman?

It is the woman who becomes pregnant, and the woman who runs the risks during pregnancy. However, by necessity, a man is 50% responsible for the presence of the fetus. Therefore, should they have a 50% vote in what happens to the unborn fetus?

There are several issues to look at before giving a man power over a woman's pregnancy.

Firstly, how can paternity be proven in such an early pregnancy? Giving a man the power to decide would mean that it is feasible that a man could try to control a woman's body even if he was not the one to impregnate her. Crucially, what does it mean for women who are raped or abused, especially if it was by someone close to them?

What about if it is the other way round?

If the father forces the woman to keep her unwanted fetus, is he agreeing to pay all the associated medical costs, take full responsibility for the child once it is born, and to allow the woman to not be a part of its life in any way? And what is he going to do about the physical and mental repercussions that the woman has had to go through due to the pregnancy? In reverse, if a woman has a child that the man doesn't want, then these are all aspects that the woman has to take care of.

The man who is suing doesn't have the answers.

Ryan Magers, who is just nineteen years old, has not been able to answer any of these questions in an interview with Refinery29. In the same article, it is mentioned that in many ways this attempt to sue the abortion clinic sounds like the work of an anti-choice activist who is trying to 'undermine a woman's right to an abortion.'

Is this an attempt at control?

Elizabeth Nash of the Guttmacher Institue, which seeks to improve education and rights of sexual and reproductive health, suggests that Ryan was unable to control his girlfriend. She had the abortion anyway. She believes that he is now taking 'extreme action to exert control.'

What does Ryan say about this?

Ryan's lawyer, J. Brent Helms, said that the decision to sue is about Ryan's desire for the opportunity for a family, although he apparently has not considered adoption. Let's remember that if this was two years ago, Ryan was seventeen at the time. He was still at high school. It's probably too early to say that this was his one and only chance.

What does Ryan's ex say about this?

Ryan's ex-girlfriend, who allegedly had the abortion, does not want her identity to be known. As such, no one has heard her side in this case. It legally cannot be made public if she does not wish it to be so. But cases such as this would certainly threaten doctor-patient confidentiality in the future.

What is Ryan hoping to achieve with this case?

Ryan's lawyer told Refinery29 that they are hoping to pave the way for other men in the future to be able to hold the women accountable. As such, the abortion clinics, doctors, medical manufacturers and the women could all suffer consequences as a result of the abortion. His lawyer also mentioned that it could lead to the 'elimination of abortion altogether in the state of Alabama.' He's starting to sound awfully like an anti-choice activist rather than a man desperate for a family.

What will happen if he sues successfully?

As already discussed, abortions have always happened and they always will. It is never a simple case and there are always huge ramifications, whichever way the decision goes. But making abortions illegal does not prevent them; it just makes them less safe. Any step in that direction endangers lives.