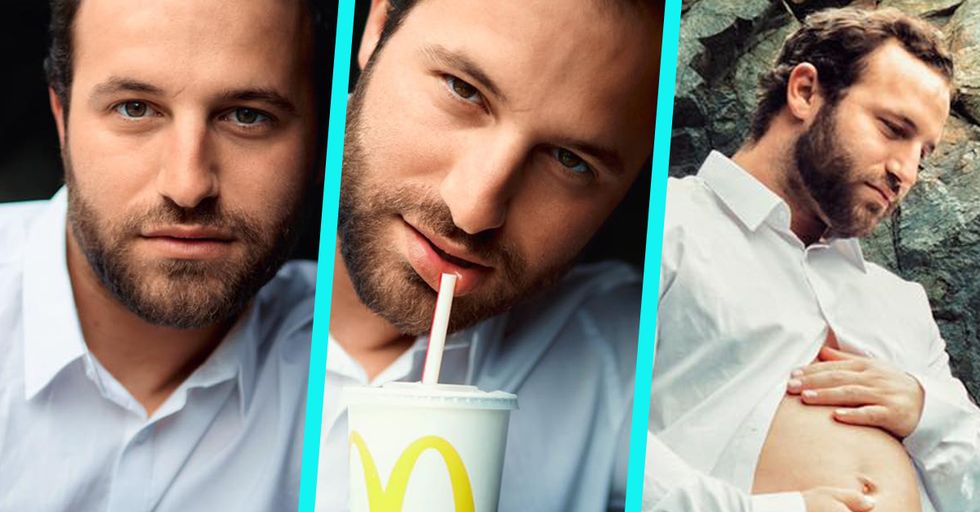 In fact, jokey photo shoots are pretty much their own whole section of the Internet. But we're not mad about it. They're usually delightful! And we can always use things that are delightful, especially in 2017. So we were overcome with smiles when this expecting dad surprised his pregnant girlfriend with a pregnancy-themed photo shoot of his own.

Earlier this year, Brianna was pregnant with their son Logan. Ahead of their gender reveal party in June, Nick surprised Brianna with a hilarious paternity photo shoot in which he showed off his dad-to-be belly.

He's obviously been born into a family with an incredible sense of humor. Logan probably has no idea that he was the inspiration for his father's viral fame. One day, Nick will have to thank his son.

Look at this adorable, happy family!

This is a sweet picture, but it's not quite as professional-looking at Nick's pregnancy shoot. He went to the beach in the town of Nahant with a photographer friend of his to get the whole effect.

And oh my goodness did it pay off. The photos are incredible.

The placement of his hands is perfect. As is the way his shirt is unbuttoned. As is the expression on his face. This photo shoot is literally flawless.

He really looks like he's contemplating what it will mean to become a father.

And yes, that's a burger he's holding. Roberts told The Boston Globe that he and his photographer friend stopped before the shoot to get some fast food to make him "look at little pregnant." But this is just the beginning of the glory that is this photo shoot...

Needless to say, that trick to make him look pregnant worked.

We know at this point that Nick still wasn't a dad, but he had that dad-bod down pat. And the rocky beach in the background is killing us. It's all so good.

On Facebook, the photo album is titled, "Beauty in all of us..."

And this photo proves that yes, yes there is. We imagine that when Brianna saw these photos, she promptly spit whatever beverage she was drinking clear across the room.

The fast-food wrappers are so perfectly placed. His belly... It's so smooth. Nick Roberts, if you're reading, please let us in on skin care routine. It's quite impressive.

The drama of the beach in Nahant was the perfect background for a moving photo shoot like this.

The emotion in his eyes is too much to handle. But we also can't look away. The next picture though...

It's so funny. And sensual? And full of McDonald's. Nick manages to poke fun at pregnancy shoots and be the subject of one of the greatest ones ever at the same time.

Look at the way he handles that burger.

It's clear from his cradle skills that he's going to be a great dad. To that burger, but also probably to Logan.

Eventually, Nick left the beach and did a segment of the shoot in the bed of a pickup truck.

Obviously, Nick knows the key to any good photo shoot is to have more than one location and more than one signature look. He pulls both of them off with great aplomb.

Nick finally reached peak dad-form in the final photo of the shoot:

What's peak dad form, you ask? Well, the truck, ax, wood, no shirt, and baseball cap pretty much sum it up.

The response to his photo shoot was so incredible that Nick and his photographer friend Stephen Cwiok posted an adorable and hilarious thank-you video:

It's clear that both Stephen and Nick have awesome senses of humor. Logan is a very lucky kid!