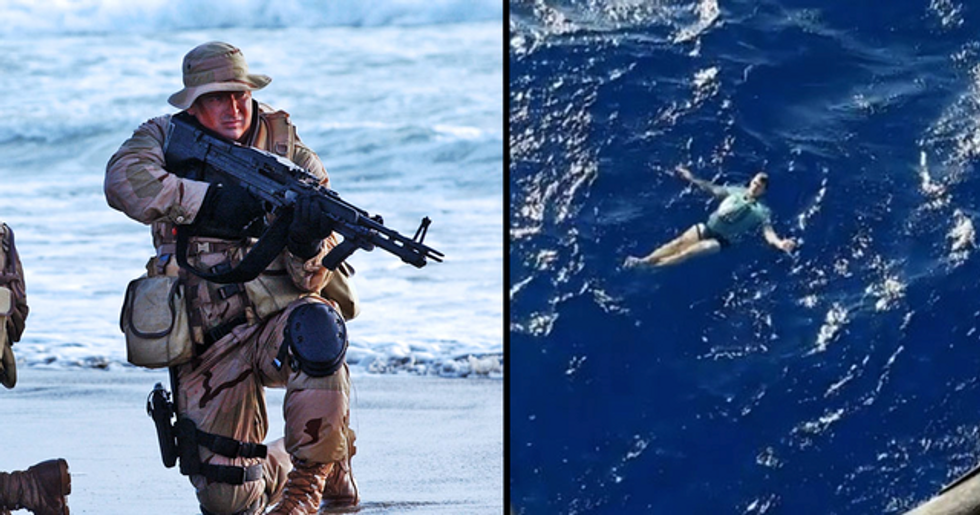 The Navy Seals are the toughest guys around. They train for sea, air and land and are made of the best of the best. You can be sure that these guys know what they're doing and they know how to survive. They are prepared for all the worst situations.

Luckily one man remembered a trick that he learned from them years ago. If he hadn't known how to do this, he probably wouldn't have survived.

Have you ever thought about what you’re wearing while you're at sea?

Well, you might want to start giving it more consideration.

One savvy sailor survived by doing exactly this.

Arne Murke is thirty years old and has been sailing for nearly twenty years. He is usually more than comfortable at sea. But this time, it started to go wrong, and he's lucky to have survived.

They were meant to be sailing to Brazil.

Arne Murke and his brother, Helge, had taken commission to sail a twelve metre yacht from Auckland, New Zealand, to Brazil. It is a huge trip, covering over 12,000km. But sadly the brothers never made it much past New Zealand.

Were they far from land?

Luckily not. They had travelled around the North-East side of the North Island, from Auckland, and were heading down the eastern coastline. They were about 28km from Tolaga Bay when disaster struck.

At 2pm on March 6, the yacht hit some rough conditions. The mainsheet was loose and it caused the boom to swing out. It knocked Arne overboard. His arm was tangled in the rope and for a few seconds he was being dragged alongside the boat.

Arne managed to get loose from the rope, but he was not wearing a life jacket. All he had on were his jeans and a T-shirt. The swell was big and he was in trouble.

Imagine seeing your brother drifting away.

His brother tried to get towards him, but the conditions meant that he already couldn't make it back. He tried to throw a life-jacket out on a rope, but Arne couldn't reach. He was getting further and further away and the yacht's motor wasn't working.

He was trying to earn money for his daughter.

Before he set-off, he and his brother had been working in vineyards in New Zealand. The money that he was earning for sailing this yacht, named Wahoo, to Brazil was meant to help him to earn money for his ten-month-old daughter. She is currently in the Philippines with Arne's girlfriend.

That's when Arne remembered a trick that saved his life.

Arne says that he remembered a trick that he had seen 'many years ago' and always remembered.

Pay attention: This could save your life.

Step one- Take your jeans off. Step two- Tie a double-knot in the two legs- tying them together.

This is the tricky part.

Step three- Fill the trousers with air. (For this bit, you need to try to use as little energy as possible. If you can, just throw them over your head once. If you need to, go under the water and breathe into them).

Now you have a floatation device.

Step four- Put the trousers around your neck, with the knots behind your head. Step five- Pull the body down and tight. It keeps the air in and allows you to float.

See how the professionals do it.

If you are struggling with filling them with air, there are a couple of different ways to do it. Watch this video to learn how they do it in the Navy.

Without the jeans Arne wouldn't have survived.

It's incredibly lucky that Arne remembered this technique, as he was out in the water for nearly four hours. His legs were starting to shake. He couldn't use his arms, because he needed to keep hold of his jeans, but the water was breaking over him and he was getting cold.

Thinking of his daughter gave him strength.

He needed to re-inflate the jeans, as they had somehow got twisted. But he was so exhausted that he went under. He really thought that he might die at this point. It was at that moment that the thought of his daughter kept him going. Arne said that while he was in the water, he just kept thinking, 'I can't leave my daughter behind without a father.'

There was still no end in sight.

Somehow he managed to find the energy to keep fighting for his life. He managed to re-inflate the jeans and make it back up to the surface. But after three and a half hours at sea, it was looking bleak.

A huge search and rescue was underway.

The Coastguard and Air Force were looking for him. His brother had managed to alert the authorities. A Hawkes Bay Rescue helicopter passed overhead twice, but both times they didn't spot him and just kept on flying.

Eventually he was spotted by the rescue helicopter.

After flying overhead twice, they finally spotted him. Arne said that there was a twenty minute gap and he thought that was it, they wouldn't come back and he would be lost. But thankfully they found him. A diver abseiled down to him and brought him back up to safety.

The rescue operation did a wonderful job.

Arne said: "I really want to thank all everyone who was involved in the search and rescue operation, they did an excellent job and I'm very, very thankful." It is lucky that he knew what to do with his jeans, so that this could become a good news story.

It hasn't put him off sailing.

Although this was a real-life, near-death experience, it has not made Arne scared of sailing again. He has always known the risks involved, which is why he was able to employ the life-saving technique with the jeans. However, he does acknowledge that he will be 'super careful' in the future.

Four hours at sea might feel like a long time, but that's nothing compared to some people.

Back in September last year, nineteen-year-old Aldi Novel Adilang survived 49 days drifting at sea in a fishing hut. The Indonesian teenager was sent out into the sea when the fishing hut was hit by a storm and its moorings were snapped.

This teenager survived for 49 days.

Although he had a few days of supplies with him, they soon ran out. He survived by catching fish and cooking them by burning wood from his own hut. Ingeniously, he drank sea-water through his t-shirt, to minimise the amount of salt he was drinking. He was found over 2,500km away, near Guam, by a Panamanian ship. They picked him up and took him with them up to Japan, and then he flew home.

Salvador Alvarenga was a 36-year-old fisherman from El Salvador. He set off on a two-day fishing trip from Mexico in November 2012, and he wasn't found until January 2014. He had drifted 6,700 miles from Mexico all the way across the Pacific Ocean to the Marshall Islands.

A storm sent them out into the ocean.

Alvarenga had paid Ezequial Cordoba, at just 22 years old, $50 to accompany him on the two day trip. As a storm hit, there were waves ten feet high. He radioed for help before the communications were knocked out. The storm took all their supplies too. They were stranded.

How did he survive?

The two caught fish and birds, drinking turtle blood and rain water to stay hydrated. Sadly, Cordoba became sick and gradually refused to eat. He died after four months at sea. Alvarenga spent the next ten months alone on his raft, trying to survive. Eventually he spotted land and swam for shore. He arrived at the Marshall Islands and made a full recovery.

But the record was set a long time ago.

In 1814, fifteen Japanese sailors were transporting soybeans to the city of Edo, now known as Tokyo. A storm damaged the mast and set them adrift. They quickly ran out of supplies, and survived off the large quantities of soy beans and by catching rain water.

Over the months, the crew started dying. After a year at sea, there were only three sailors left; the Captain, Jukichi, and two crew members, Otokichi and Hanbe. After 484 days lost at sea, they hit land. They had arrived in California and it was 1815.

They were the first Japanese in America.

The sailors had drifted over 5,000 miles across the Pacific Ocean. They became the first people from Japan to set foot on America. They were returned to Japan, but sadly Hanbe died on the journey home. However, Jukichi received numerous honours. To this day it is still the longest that anyone has survived. Hopefully it will remain the record.

These people who survived for longer all had rafts or ships of some sort in which to survive. Shelter, food and hydration are all essential for survival. As Arne Murck was stranded in the water, he would not have been able to catch any food, or rainwater. It also meant that his body temperature was plummeting. A few more hours and it would have been dark. That would have made his temperature colder, and made it harder for the rescue team to find him. He almost definitely wouldn't have survived the night.

Staying safe at sea is the only way to survive.

It is important to make sure that you are well-trained in what you are doing, and that you know the emergency procedures for if anything goes wrong. It is fortunate for Arne that the rescue operation was able to find him. If he hadn't kept his head and thought to use this life-saving technique, it might have been a different story.