Man Takes Drugs at Disneyland, Turns up a Mile Away Naked | 22 Words 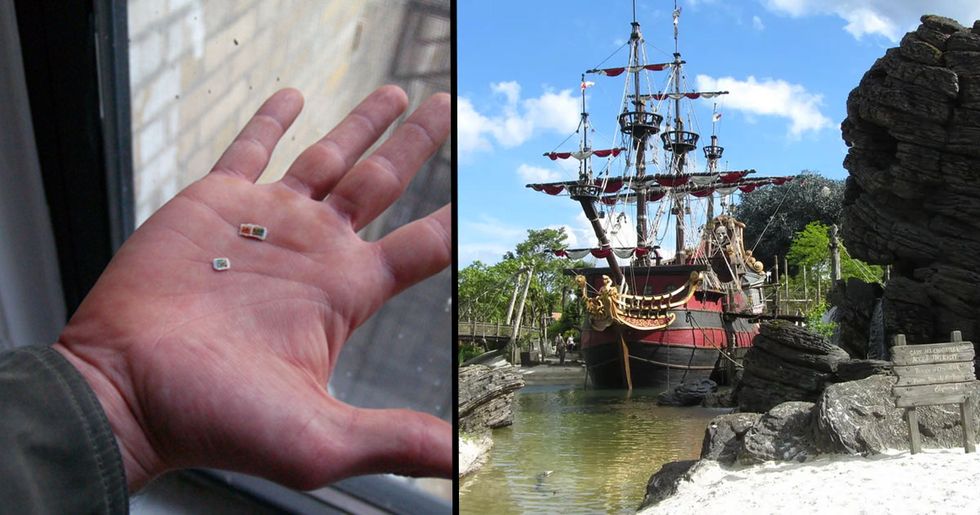 Man Takes Drugs at Disneyland, Turns up a Mile Away Naked

Ah, Disneyland. It's a place full of adrenaline-inducing rides, fun-filled characters, and fairy-tales galore. All-in-all, it's one of the most popular destinations for kids who want to meet their favorite big-screen characters (and it's a pretty good day out for some adults too.)

But, for one guy, the bright colors and all-round Disney fun was clearly not enough, so he decided to ramp things up a notch by taking drugs at the famed theme park, but ended up tripping so badly that he turned up a mile away... completely naked.

It's a rollercoaster of a story (see what we did there)... keep scrolling to read how it all happened and the trouble he landed himself in.,

Disneyland is without a doubt one of the most famous theme parks.

It's developed a life-long legacy of being a perfect family vacation, especially for the kids... a trip to the resort for them is pretty much a dream come true.

The first amusement park was based in California, which still stands as the original park. There are now a total of 6 Disney resorts, with Disneyland parks located across the world in California, Paris, Toyko, and Hong Kong.

Both Disneyland and Disneyworld resorts are home to acres of land developed into individual theme parks including Adventureland, Fantasyland, and Magic Kingdom, to name a few.

The Disney-realm just keeps getting bigger and bigger...

Whether it's a new ride, new movie, or a full-blown streaming platform, there's not much Disney hasn't had a hand in.

Each theme park is full of big-screen characters and rides for all ages.

From white-knuckle to family-friendly, there's something for everyone.

There's no shortage of things to do.

Whether you're embarking on a character dining experience, going full-blown adrenaline junkie on the rides, or taking it easy in the spa, it feels like there's always a jam-packed itinerary in store.

All-in-all, we can all agree, it has lived up to its label of being the most magical place on Earth.

But, for one man, the magic clearly wasn't enough.

After traveling to Disneyland Paris with his girlfriend, the dazzling colors and thrill-seeking rides clearly weren't cutting it for him.

So, the thirty-two-year-old took drugs to ramp things up a notch.

The unnamed tourist, who is from Switzerland, initiated a huge search party after tripping out on the drugs at the family amusement park.

Disneyland is supposed to be a family-friendly resort...

So it shouldn't be somewhere where taking drugs springs to mind.

But the man was clearly trying to enhance his Disney experience...

But, it became quite clear that the drugs had quite the opposite effect...

After being given the substance by his girlfriend, the man fell into a body of water near the Adventureland area of the theme park.

But, after plunging into the water completely naked near Captain Hook's pirate ship, the guy managed to walk an entire mile.

With everyone unable to locate his whereabouts, the drugged-up tourist sparked a huge search party...

...an entire 130 person manhunt, to be specific. With the park closing imminently, the tourist's thirty-year-old girlfriend alerted the authorities.

The turnout was pretty staggering.

What the guy clearly thought was harmless fun turned into a pretty serious search. In total, thirty firefighters, ten divers, eighty Disneyland employees, sniffer dogs, and a military helicopter complete with a thermal scope were deployed on the lengthy search for the man.

But, it wasn't this extensive search party that ended up finding the man...

In fact, it was a man who was driving home, around 1.2 miles from the theme park.

He discovered him in the early hours of the following morning.

Speaking to Le Parisien, the man - named only as Benoit - said: "I was driving home on Saturday around 1 am when I came face to face with a naked man. He was walking in the middle of the road. He did not have a centimeter of cloth on him and he walked barefoot. "I stopped, got out of the car and went to meet him. I wanted to know what a naked man was doing 300m from my home," he explained.

According to the guy who stumbled across him, the naked tourist didn't remember a thing...

"He had scratches on his legs and arms. He did not remember anything."

Now more aware of his surroundings, the man explained that he had taken drugs and needed to contact his girlfriend.

After telling the man that he had been at Disneyland before his, well, slight detour, occurred, Benoit got him some clothes to wear and drove him back to the theme park.

But, when he got back to the resort, he was greeted with a nasty shock...

The man and his girlfriend were subsequently arrested for drug use and both received a "rappel a la loi" - which is essentially a slap on the wrist - before being released that afternoon.

So apart from some cuts, bruises, and a lot of police time, the man managed to get away with it.

But here's the lesson kids: don't do drugs... especially in Disneyland. Sadly, this isn't the only eyebrow-raising event to go down at the theme park. Keep scrolling to learn more about a violent mass brawl that broke out at the California resort.