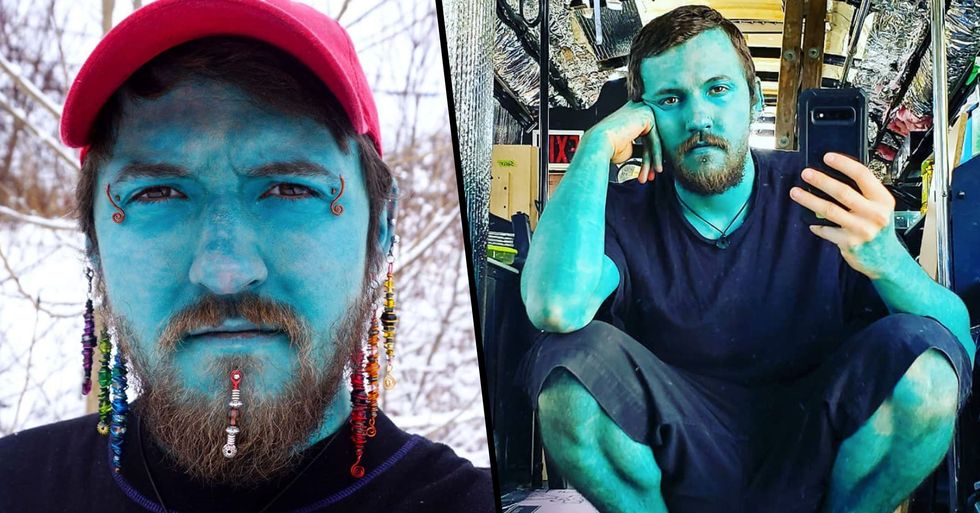 Man Tattoos Entire Body Blue so He Can Feel Condfident

What do you do to boost your self-confidence? Do you have a hair cut? A wardrobe makeover? Or do you tattoo your entire body blue?

Yeah, it probably isn't that last one. But one man has seemingly found this method very effective and is now thriving in his new, turquoise blue skin.

Keep scrolling for the full story, and to hear why exactly he chose to ink his skin in such an unusual way...

In today's day and age, tattoos are more popular than ever before.

Millions of people worldwide now enjoy expressing themselves and decorating their bodies through this beautiful art form.

While some have a subtle design on their ankle, others choose to be covered head to toe in the ink.

This particular type of body art has been around for centuries...

With inked lines and dots being found on mummified pharaohs in Egypt who date as far back as 2,500 years.

Over the years, the designs became more artistic.

And more and more people began to jump on the trend that was once reserved for tribe leaders and sailors.

Fast forward a couple of hundred years, and tattoos had gradually become known as something only punks and alternative people would get...

But today, pretty much everyone now has a tattoo, including the rich and famous.

Especially those that are large and very exposed.

These days, people are becoming more and more experimental with their ink...

And just their arms and legs are no longer satisfying their ink craving.

Some people have been tattooing rather unusual parts of their body...

Their eyeballs being a prime example. This horrifying procedure was developed around ten years ago and involves a small amount of ink being injected under the conjunctiva (the clear membrane covering the front of the eye) and over the sclera (the whites of the eye).

This rather alternative look has being growing in popularity in recent years...

And some people aren't stopping at just their eyeballs.

Some are deciding to tattoo their entire bodies...

In just one color.

Who is in the process of coloring his entire body bright turquoise blue.

Donnie, from Scarborough, Ontario, started the painful process back in 2017.

His sister, who conveniently happens to be a tattoo artist, filled part of his leg and ankle in with the turquoise blue ink after a few small tattoo attempts on other parts of his body.

But this only fuelled his obsession.

The twenty-six-year-old, who worked as a forklift driver at the time, decided to extend the color from his leg onto the rest of his body.

I know what you're all thinking... Why on earth would you do that to your own body?

Well, Donnie's reason is pretty simple. According to the Daily Mail, Donnie explained: "I like the clean look - unladen by symbols. There's a whimsical element. I thought I'd do my part to keep things interesting, maybe make someone smile. You've only got one life - might as well have some fun, eh?"

He claims that, before coloring his skin, he lived a life of self-isolation and fear.

"Over several years I had been isolating myself, and making efforts to tone down my less-than-pragmatic impulses, out of fear and lack of confidence - and I was extremely miserable."

But he decided to turn his life around...

And start putting his own happiness first. "After going in circles for far too long, I decided to quit hiding, break myself out of stagnation and remake my life as I'd like it to be, and redirect it to the pursuit a life I'd actually be happy to live."

And, understandably, Donnie's image has brought with it a lot of attention.

"I get all kinds of comments and reactions when I'm out. Some people love the tattoo, others are clearly not thrilled about it. The questions are endless, and many people are very curious - I don't blame them, of course."

He claims to have had every sort of reaction under the sun.

He even gets free beer... Sometimes...

And most can't help but wonder...

What must his mother think of his turquoise blue skin?

Obviously, she wasn't too pleased with her son's decision at first...

But she has apparently warmed to his alternative look. "Mom was definitely annoyed at first. But she quickly accepted blue skin as the new normal. I feel a renewed optimism about the feasibility of pursuing wild dreams."

These days, Donnie lives out his days as a jewelry maker...

Which he makes and sells out of his own make-shift transit bus home... Thing.

But he couldn't be happier.

"I feel as if I'm slowly becoming re-energized after a protracted period of stagnation. I might become a trillionaire, or move to Mars. Or just carry on selling earrings and get my bus fixed up." For more unusual tattoo choices, keep scrolling to read about Post Malone's latest ink addition...