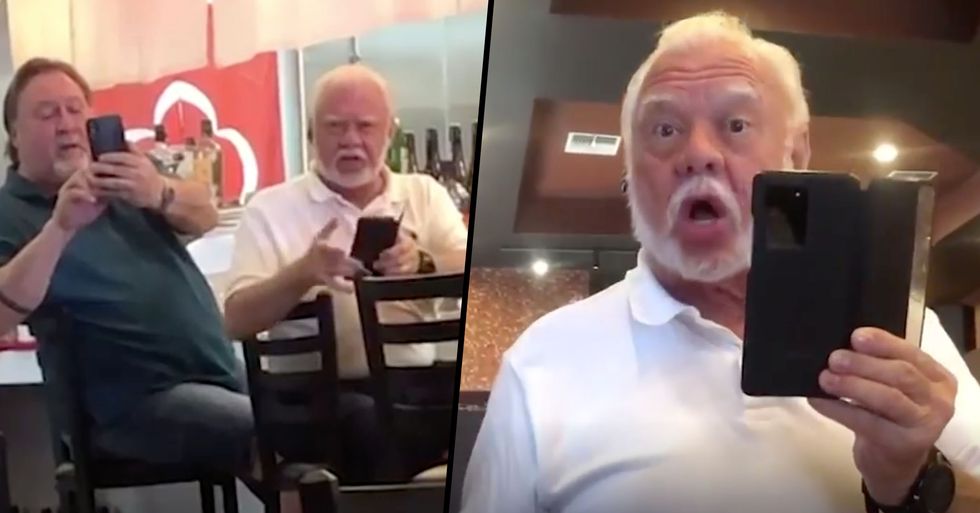 Even though we've had a hard time dealing with angry, white, female "Karens", we have now been exposed to a fair few male "Karens" now, AKA "Kens." Yes, life just got one step harder for us all.

The latest video exposure shows this one man harassing a woman after she was fussing over her one-year-old baby in a restaurant and the video is extremely uncomfortable to watch.

Keep scrolling to see what happened...

Recently, the world has been exposing more and more "Karens."

But just as we get stronger, so do they. "Karens" have leveled up as now "Kens" have appeared on the scene.

While "Karens" are known for demanding the presence of a manager to complain...

Kens are known for their independence, as they try and handle the problem themselves...

But ultimately, they get stuck after a video camera is pulled out...

So they resort to calling the police instead.

Or in this case, they start videoing the situation themselves?

I know, I know, it makes no sense whatsoever, but this breed of human is hard to understand.

The name has become associated with a certain type of middle-aged white woman who’s likely to throw a fit if she doesn’t get her own way.

But we aren't complaining! We're just waiting on the Ken memes to jump out.

But one thing we're completely thankful about is that we know how to spot them.

I see that haircut, Karen. You can't hide.

There are a whole range of Karens/Kens out there...

But in more recent times, we've seen an unusual influx of them dominating our headlines.

As we become more aware of social issues in the country, we can't help but notice that Karen's are often at the center of the scandal.

Just a few months ago, a "Karen" was publically ridiculed after she was filmed calling the cops on a black man while he was bird-watching.

She unleashed a barrage of hateful and racist abuse at the shopper, and even told her to "go back to Mexico." What is with these Karens and being racist?

And don't even get me started on these two...

Remember when they whipped out their pistols and rifles because protestors were walking past their million-dollar mansion?

I promise I'm not making this up.

They threatened to shoot people that were there in the area because they "feared for their lives" like the protestors were the ones with guns in their hands... The true definition of a Karen and Ken.

But just when you thought it couldn't get any worse, new video footage has proved otherwise.

A middle-aged white male and his friend were in a restaurant when they started verbally abusing a black woman and her child as they were trying to enjoy their food.

I know what you're thinking... Crying babies can be frustrating, right?

But the one-year-old child was not crying as shown in the video, she was making sounds and bouncing up and down in her baby seat, but for these two men, she might as well have been screaming the place down the way they reacted over it.

In the disturbing post, you can hear the child's mother defending her baby while explaining what was going on.

She posted the video onto her Instagram along with an emotional caption stating this: "Never in a million years would I have thought I would encounter this. I took my 13-year-old sister and my baby girl Mila to dinner to UMEZONO SUSHI AND GRILL in Las Vegas NV. Walking in, I see them giving us the death stare, my body had chills. It hasn’t even been 5 minutes before these two creatures started mocking my 1-year-old, harassing us, calling my 1-year-old daughter annoying. Calling me a radical left and telling me to keep her quiet or else!"

"At this point, I’m shaking terribly, I did not know what to do or say. My intuition told me if I did anything out of my character that they were going to cause us some harm, so I pulled out my camera and started recording. But right before I started recording, the creature in the white shirt said some derogatory, disgusting, racist comments I do not wish to repeat at this point. God knows what else they were saying to the chefs that were in front of them."

"I am so heartbroken for myself, my little sister but more importantly for my innocent, sweet baby girl Mila. This is the world we live in!!! This is America. I am so sorry Mila, so lost for words."

The internet was not happy with these two men either.

As the videos show, you can see them get more and more riled as the black woman continued recording. What is with Kens getting irritated when they see a camera?

And things get worse as people listen to the videos more clearly...

@Hasuess @AprilDawnK @TMZ Before she started rolling they called her racists slurs and while rolling you can hear t… https://t.co/dJtoBDdU4A
— ToxicK is Toxic (@ToxicK is Toxic)1595984608.0

If this is true, this is not acceptable.

Imagine complaining about a "noisy" child in a noisy diner?

Others had more pressing issues to deal with...

I think Keith is the best option, to be honest.

Let's just hope these two vile men get what they deserve. Keep scrolling to see just how far Karens are willing to take the act...