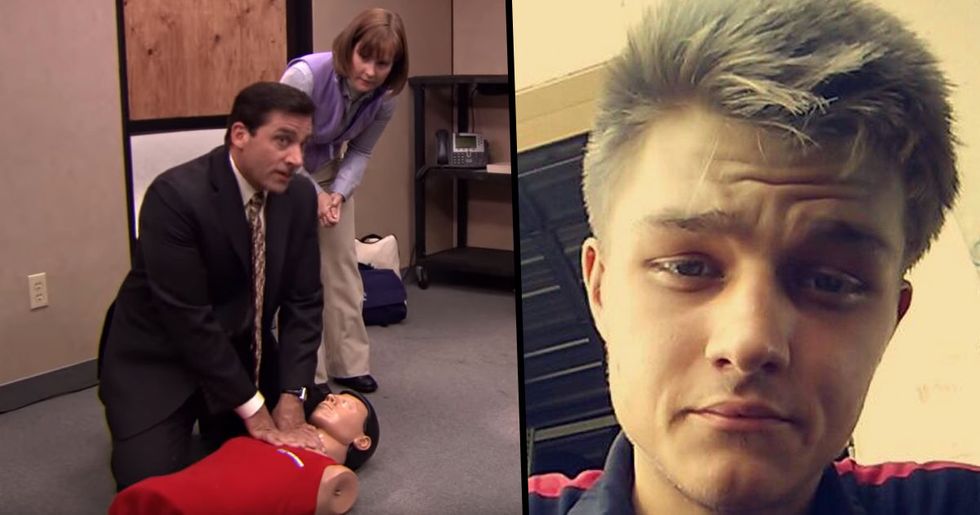 The Office is definitely not in the top list of TV series that can be of some life-saving use. We turn it on when we're tired of our own office or in need of some silly, yet accurate, humor.

And especially not the one episode in which the office "gang" have to go through a CPR training session after Dwight's terrifying fire drill. It's actually more about what not to do in an emergency situation. Dancing to "Stayin' Alive" verses and peeling of the dummy's face are not first aid techniques.

But for one Arizona local, Cross Scott, the episode taught him everything he needed to save a woman's life. That and his innate gift of courage.

Good news is, there are plenty of other TV series that are making sure their audience is well-informed when it comes to life-and-death situations. Such as Grey's Anatomy, which has recently received an award for doing just that.

If you've been living under a rock for the past decade, The Office is an American version of the British TV series of the same name.

It has 9 very successful seasons and an 8.8 IMDb rating as a result. The series mainly mocks a group of typical small office workers and consists of everything from boredom to pranks to work-place inappropriate behavior.

The series stopped filming in 2013 but it's still #52 in the IMDb Top Rated TV list.

It's unsurprising, considering that The Office has won a total of 45 awards and received 186 nominations. This includes 1 Golden Globe and 5 Emmy wins.

But I bet you never thought a mock comedy could one day save somebody’s life.

Season 5, episodes 14 and 15 named "Stress Relief" were definitely not meant to be educational.

Rather, it emphasized the workers' immaturity and incompetence when it comes to life-saving knowledge.

Yet, it was viewed by 22.91 million people, according to Fandom. In the two-part episode, Dwight starts a too-realistic fire drill which gives Stanley a heart attack.

Now the ambulance gets there in time and Stanley turns out okay, but Corporate decides to put the office through CPR training.

So American Red Cross send over an instructor for the job. She arrives with a dummy and attempts to teach Michael CPR.

The most important part of the scene is when Michael does chest compressions too fast, so the instructor tells him to do the compressions to the beat of the song "Stayin' Alive" by The Bee Gees.

Of course, Michael mistakes it for the song "I Will Survive" Gloria Gaynor.

He finally gets it right.

But The Office wouldn't be The Office if Andy didn't start singing, Kelly didn't break into a random dance, and Dwight didn't wear the face of the dummy. None of that was very informational.

Most people thought the scene was actually one of the most hilarious of all time.

For example, u/ReadMyPosts said on Reddit, "The Office CPR Scene. Never laughed so hard at a television scene in my entire life. A real free-for-all."

But turns out, some found the scene very useful.

Such as this guy, Dbldumbass, a CPR instructor, who shared on Reddit that he shows the clip before every class he teaches.

Or this guy, an Arizona mechanic and the star of today's news, who actually saved a woman's life, using the CPR technique he'd learned from The Office.

As The Arizona Daily Star reported, the 21-year-old Cross Scott (no relation to Michael Scott) found a woman locked in her car, unconscious and not breathing.

He had absolutely no emergency training.

But he did manage to remember Michael performing CPR to the beat of "Stayin' Alive."

Thank God, two other women were just driving by.

They pulled over when they saw the car and were the ones to call 911.

The Arizona Daily Star also noted that Scott was actually singing the song out loud as he performed CPR.

Eventually the woman "drew a breath and threw up," so Cross rolled her onto her side so she wouldn't choke.

The song is known to have the right tempo for chest compressions.

Paramedics arrived 10 minutes later and took the woman to the hospital.

They also told him that without his CPR the situation wouldn't have ended so luckily, meaning either death or severe brain damage due to the prolonged lack of oxygen.

The woman was released from the hospital later that day, but the Tucson Fire Department refused to share anymore details about the incident.

Cross later told the interviewer that he had no cellphone on him.

He also added, “I’ve never prepared myself for CPR in my life. I had no idea what I was doing."

The feeling is familiar to all of us.

Most people have at least seen CPR being done on TV but a lot of them take no action in fear that they might break a rib, make the situation worse, or even leave the person disabled.

"If you don’t do CPR, that victim will die. Don’t be afraid to act. Whatever you do will help that victim and hopefully prevent a death."

He also confirmed that “Stayin’ Alive" is indeed the correct rhythm for chest compressions.

The Arizona Daily Star also pointed out some additional details about the incident to give you a better idea of what you can do in a similar situation. What was Cross doing in the right place, at the right time? Test driving a customer's car when he saw a sedan with its hazard lights on and slowly rolling forward.

How did he know the woman was unconscious? He saw her slumped over the steering wheel as he drove by.

How did he stop the car from moving? He pulled over in front of the sedan, placed a rock under the front wheel, then broke the driver's window with a rock after she didn't respond to any of this.

At the end of his shift at work he went to the hospital to check on her but found she had already been released.

"All I could think about was picturing her face," Cross said.

"I had to make sure she was OK. That's the only reason why I went to the hospital."

He also told the interviewer he would like to finish his high school diploma, go to college, possibly study engineering, and eventually get proper training in CPR.

Luckily, Cross did get a chance to meet the woman eventually who thanked him for saving her life.

Cinema Blend reported that his coworkers called him a hero when they heard about his actions. But Cross was humble in his response and said the true heroes "are the paramedics who help people every day."

Apart from The Office, there are many other TV shows that might one day save a life too. Maybe they already have.

Not long ago Grey’s Anatomy featured an episode in which one of the main characters, Dr. Miranda Bailey, has a heart attack.

Beacon reports that in the episode, titled “Don’t Fear the Reaper," Dr. Bailey checks herself into an ER at a hospital and tries to convince its doubtful male doctor she’s having a heart attack.

As Beacon wrote, the scene showed how frustrating it can be sometimes for women (in particularly women of color) to be misdiagnosed or "diagnosed based on their 'emotions,' rather than their symptoms." It also shows "how differently women experience heart attacks in comparison to men."

Wilson said, "What was really important was the fact that Miranda knew her own body. And that she knew that something was wrong."

"I also think it was really important that she portray someone who didn’t want to let anyone else know about it because that’s one of the other big things we do as women."

"We try to go through things alone. And she did all of that," Wilson added.

"The other thing was to get the statistics out, even though I was speaking to people that should know — the other physicians."

"Bailey’s always teaching, so that wasn’t out of character for her to do so." "And then ultimately to have a cardiac incident right there in the emergency room, and to not only be there and say she’s right, and that thank goodness she’s still in the emergency room and get treated with immediacy."

Beacon also asked Wilson whether it was difficult to shoot the scene since it's not uncommon that women worries are sometimes dismissed as "emotional" or "psychological."

Wilson did such a great job portraying a woman in the middle of a heart attack that WomenHeart: The National Coalition for Women with Heart Diseas awarded her with the Excellence in Media Award.

“We’re thrilled to give Chandra Wilson the Excellence in Media Award for her incredibly accurate and moving performance," said WomenHeart CEO Mary McGowan. “Her character’s persistence and self-advocacy will live on in the millions of viewers who are now more educated and informed about how to advocate for their heart health."