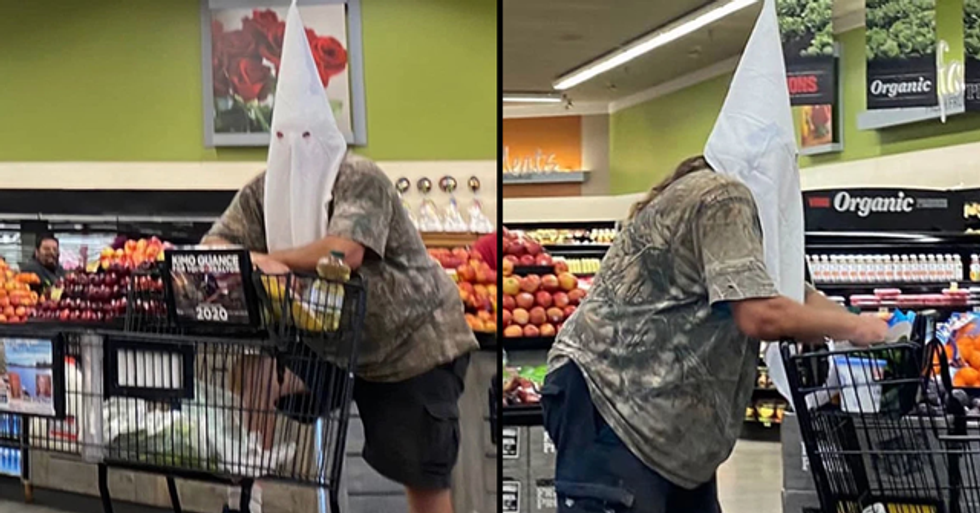 In the most recent installment of "why America is doomed", a Californian man has been pictured strolling around a grocery store all while wearing a white, KKK-inspired hood.

All over the country, people have been going to extreme lengths to maintain their personal hygiene.

As the medical pandemic continues to rage on, we have never before been so conscious of our own hygiene and social interactions.

In a bid to prevent further spread of the virus, we have been donning an array of protective gear whenever we leave the house.

From face masks to disposable gloves... During this pandemic, most of us have become hygiene experts.

And even those who don't own a face mask have been improvising.

Crocheted masks, scarves, and even plastic shields... The lengths in which some people have been going to avoid the virus have been admirable.

But recently, one man's method of protection took things to a hateful new level.

A man in San Diego has recently sparked a whole lot of outrage for his choice of protective face gear.

Now, San Diego county recently made face masks an official requirement for those leaving their homes...

This means that, whenever a resident goes outside, they are legally obliged to wear some sort of protective face mask. Sounds pretty straight forward, right?

But one shopper wasn't satisfied with just a regular face mask...

And, instead of covering his nose and mouth with masks or scarves like the rest of us, he decided to don a notorious KKK-inspired hood for his visit to the grocery store.

Understandably, people were completely horrified by the sight of the hooded man.

There's something a little unnerving about a hooded KKK-wannabe strolling around a grocery store, isn't there?

Now, for a little bit of context...

The KKK, or the Ku Klux Klan, is a notorious American white supremacist hate group.

Their hatred and racism has been spread for decades now.

Since 1865, the KKK has spread its vile message of hate and racism through a variety of violent acts, such as murders, arsons, bombings, and assaults against minority groups.

But the group has also been known to target other racial and religious groups, such as Jews, immigrants, and members of the LGBTQ community.

And perhaps the most recognizable aspect of the group is their white hoods.

Though they are not worn as often these days, traditionally, KKK members would don pointed white hoods that would cover the entire face apart from the eyes.

Over the years, the white hooded cloaks have become a renowned symbol for white supremacy...

And, despite the group's numbers drastically dwindling in more recent years, there are still a small number of loyal racists abiding by the archaic KKK values.

So, understandably, people were alarmed to see a man proudly wearing one of these hoods while shopping for groceries this week.

Yep, this is the America we're living in.

The incident happened at a Vons supermarket in Santee, San Diego over the weekend.

Stunned shoppers watched in horror as a man, who is yet to be identified, casually strolled around the store while wearing the KKK-inspired hood.

It is completely shocking.

Fellow shopper, Tiam Tellez, took these photos of the cloaked man, and shared them onto social media, where they were quick to go viral.

People cannot believe that these things are still happening.

Apparently, store clerks repeatedly asked the man to remove the hood, but it wasn't until the man had completed his shopping that a supervisor finally approached him at the checkout line and formally asked him to take off the hood or leave. The man finally removed the hood, bought his items, and left.

Detectives are reportedly "looking into the matter and will pursue any appropriate criminal charges."

“The Sheriff’s Department does not condone hate or any acts of intolerance in our communities," the department said in a statement in response to the incident. “We are a county that is welcoming of people from all backgrounds." The incident is also being treated as a hate incident.

But many have been slamming Vons for allowing the man in the first place.

It is completely shocking that he was allowed to walk around like this for as long as he was.

Don’t know which angers me more - the person wearing this or the fact that no one in management @Vons Santee did an… https://t.co/yY7obAeyPu
— Tammy Gillies (@Tammy Gillies)1588527870.0

And Tammy Gillies, the regional director of the Anti-Defamation League in San Diego, reminded people that "San Diego is #NoPlaceForHate."

It's a devastating step back in Santee's fight against hate.

Over the years, Santee has worked hard to overcome a history of racially motivated attacks and skinhead activity that led to nicknames such as “Klantee." The man is yet to be formally identified or arrested, so we will be posting updates accordingly. For more on the fight against hate, keep scrolling to read about the woman who refused to give her dying grandfather her kidney because of his racist past...