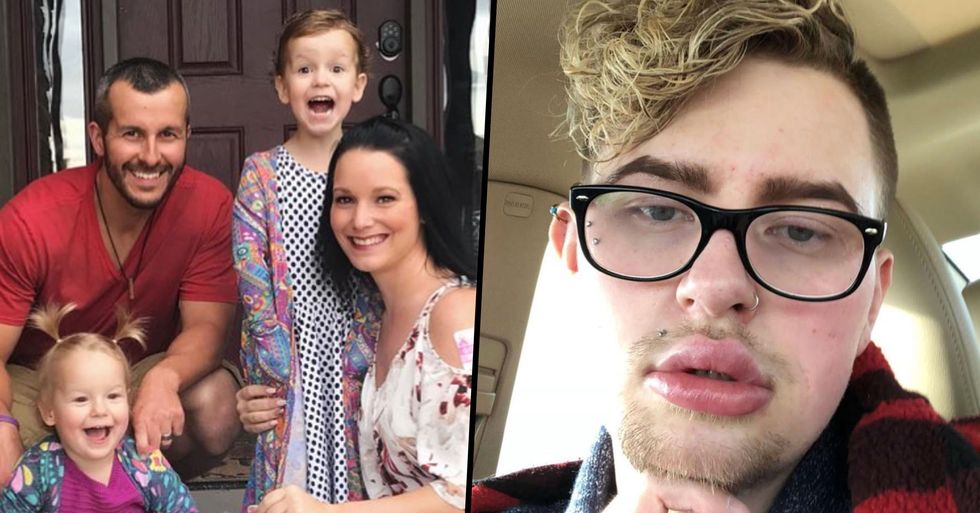 What more was Chris Watts hiding from his family? Keep on scrolling to find out about his supposed romance with a gay lover...

And since the release of the Netflix documentary, American Murder: The Family Next Door, his name has yet again been making headlines.

It turns out that his affair with his mistress wasn't the only thing he was keeping from his family...

Because a gay man has recently come forward detailing a 10-month fling with the killer.

Now, it's the documentary everyone has been talking about.

Since the documentary aired, people have been reeling at the harrowing details of the highly-publicized Watts case...

And they simply can't get over how a person can commit such terrible crimes upon their own family.

How could a father do this to his children and wife?

Disgusting doesn't quite cover it...

All of this to "start a new life"?

This is something that will be talked about for decades...

This Chris Watts murder documentary proves my theory that people who overshare on social media about how great the… https://t.co/1q2fIgVIgW
— Shannan (@Shannan)1601532229.0

And after watching the documentary, people are convinced they could see signs from Shannan's behavior on social media.

But just weeks on from the documentary's debut...

Several new details about the case came to light.

And while Chris had always maintained that he committed the murders in a fit of rage, letters that he recently sent to author, Cheryln Cadle, tell a very different story.

"When she started to get drowsy, I somehow knew how to squeeze the jugular veins until it cut off the blood flow to her brain, and she passed out. He added: "Her eyes filled with blood; as she looked at me and she died. I knew she was gone when she relieved herself."

Though many are simply grateful that he is destined to spend the rest of his life behind bars.

But who knows how honest Chris has been so far?

Because more and more details are continuing to emerge that suggest the killer hasn't been honest... at all.

It turns out that Nichole wasn't the only love affair in Chris' life.

Twenty-eight-year-old male escort Trent Bolte has come forward with claims that he had a sexual relationship with Chris shortly before the murders.

Trent claims to have had a 10-month fling with the killer...

And it all started when Chris messaged him on the dating app MeetMe in May 2017, claiming at first to be "fully straight."

Chris then told Trent that he "didn't know if he was straight or not"...

And according to reports, when they finally met, Chris "ripped off" Trent's clothes and they spent an intimate few hours together.

It didn't take long after their first encounter for Chris to introduce his new lover to the young girls at a shopping center...

Who were, of course, completely oblivious. Chris had previously vowed, "If you turn out not to be a psycho maybe you can meet them."

Their relationship progressed over the months...

Trent explained how they stayed overnight together in a remote Wyoming cabin and shortly afterward, Chris spoke of how he wanted to "run away" with Trent and the 2 girls. "We went and looked at houses together in Fort Collins," Trent said when speaking to Inside Edition, "I was in the process of moving out of where I was staying. I was planning on getting a 2-bedroom apartment, but Chris was like, ‘No, I’m going to be divorced. We need to look at 3-bedroom houses and the girls can have a room'."

However, Trent was the one to end things with Chris after 10 months...

And it is believed Chris started dating Nichole within days of separating from Trent, in which he gave his new girlfriend the exact same story as he did with Trent.

Of course, Trent's transparency about his relationship with Chris created a lot of suspicions...

And Trent was forced to repeatedly deny any involvement in the murders because he had absolutely no idea of Chris' brutal intentions.

Trent soon realized the monster he had been involved with...

This monster needs no more attention, it should be obvious that he loves attention, negative and positive. If it br… https://t.co/BKvSOtiDn9
— Trent Bolte (@Trent Bolte)1563065216.0

And it's clear that his deepest sympathies lie with Shanann's family.

But just for closure...

Trent would like to see Chris for "one last time."

Trent plans to try and visit Chris in prison for one last time.

"Once, just for closure for me. After that, I don’t want anything to do with him... It’s not like I’m still in love with him, but I still view him as the Chris that I knew."

Trent was once in love with Chris, so of course, it's difficult for him to comprehend such a monstrous act being carried out...

But it just goes to show how truly evil Chris really is.

For more, keep on reading to see what Chris Watts' parents had to say about the documentary about their murderous son...