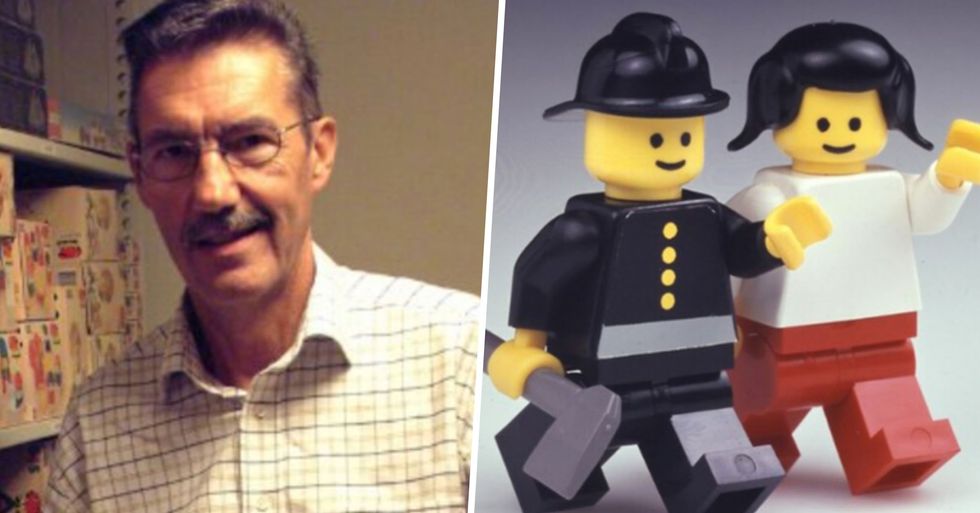 The man behind the original design of the iconic LEGO figurine, Jens Nygaard Knudsen, has sadly passed away.

Nygaard Knudsen worked for the LEGO company for over thirty years, and some argue that he revolutionized how children play with the brick toys.

Keep scrolling to read about this man's incredible life, and the legacy he has left behind.

LEGO is a staple part of millions of childhoods.

These multicolored plastic building blocks have kept generations of children all over the world entertained.

LEGO is one of the more iconic toys of the century...

And has proven the test of time, remaining just as popular today as ever before.

The legendary block-shaped toys were first designed back in 1932...

In a small toy shop in Denmark - Though it wasn't until 2 years later that the business took the name of LEGO, which came from the Danish words "LEg GOdt," meaning "play well."

Today, the LEGO company has grown to become an empire.

LEGO now owns its own theme park and television franchises...

And is estimated to be worth around $14.6 billion dollars.

Yet, behind all of this success...

There has been one trademark item that has carried LEGO's image and brand through the test of time.

And that's the LEGO figurine.

Though the brand was launched in the 1930s, LEGO's iconic figurine didn't make an appearance until 1978.

For years, LEGO was based exclusively on building blocks...

Meaning that the LEGO world was full of buildings, cars, and landscapes, but no human characters to experience them.

But one man was about to change everything for the company.

Jens Nygaard Knudsen, a Danish designer who had been working with the LEGO group for a decade, pitched an ingenious idea.

Que: The birth of the LEGO figurine.

Nygaard Knudsen realized that LEGO worlds should exist with characters to inhabit them, and thus he began to formulate the LEGO Minifigure in his mind.

The result was the figurines we all know and love today.

It took Nygaard Knudsen over fifty different attempts to refine and perfect his vision.

But he eventually arrived at a design that finally brought the human side to the world of LEGO.

His figures had hands to grasp LEGO accessories...

And feet that could be firmly planted on every brick. They also had arms and legs that could move and be posed alongside the unlimited building options LEGO bricks provided.

It's safe to say that Nygaard Knudsen revolutionized the world of LEGO.

So the shocking news of his passing has left a mark upon the LEGO community.

His death was announced via the official LEGO Twitter page.

A photo of Jens was shared alongside two of his figurines with the heartfelt message, "We're very sad to hear that Jens Nygaard Knudsen, the creator of the LEGO Minifigure, has passed away. Thank you Jens, for your ideas, imagination, and inspiring generations of builders."

The mastermind behind the figurines passed away, aged seventy-eight, on February 19th after a long battle with Motor Neuron Disease.

It is believed that he passed away while living in hospice care.

Since the news of his death broke, tributes have been flooding in on social media...

@LEGO_Group @DoSAinterntl Thank you for your invention, the firefighter was my first of the new wave of figures I h… https://t.co/mBGqCrXotX
— Phill (@Phill)1582565762.0

As people come together to remember the legacy he left upon the world of toys.

Many dedicated LEGO fans have been crediting Nygaard Knudsen fully for the success of the company...

While others have simply thanked him for making the world such a wonderful and colorful place.

Matthew Ashton, who produced the LEGO movies, also paid tribute, dubbing Jens as one of the "unsung heroes of the toy industry."

Jens was not only responsible for designing the #LEGO #Minifigure he also drove the development of many early LEGO… https://t.co/u97koHfpmg
— Matthew Ashton (@Matthew Ashton)1582557950.0

Taking to Twitter, he wrote: "Jens was not only responsible for designing the #LEGO #Minifigure he also drove the development of many early LEGO Product lines including my childhood favorite Classic Space. He was truly one of the unsung heroes of the toy industry."

The official cause of death has not yet been confirmed.

Without him, I would have never been inspired to do the things I do today, without him I wouldn’t even have my job… https://t.co/0FFkYJh2zQ
— Matthew Ashton (@Matthew Ashton)1582306977.0