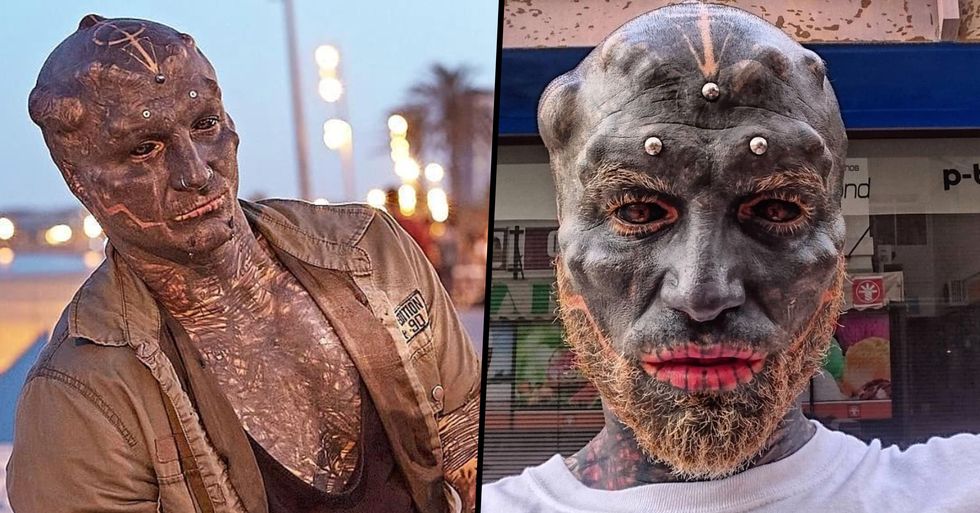 Man Who Has Transformed Himself Into 'Black Alien' Has Nose Removed

A man who has been transforming himself in a "black alien" for the last few years has taken the final step in his modification journey by having his entire nose removed.

Just wait until you see the before and after photos...

For many, tattoos and piercings are a definition of character.

People enjoy expressing themselves through body art and modifications... because who cares what others think?

And as anyone with a tattoo or body piercing can agree...

They can become seriously addictive.

More than often, one tattoo or one piercing just isn't enough...

And many find that the fewer modifications they have, the more boring and generic they look overall.

Of course, body mods and tattoos aren't for everyone...

But many people simply can't get enough of altering their appearances.

This can lead people to go to the ultimate extremes...

And one of these people is Anthony Loffredo.

As you can see, Anthony doesn't have the most conventional of appearances...

And the thirty-two-year-old Frenchman has dubbed himself as "The Black Alien."

Anthony has had a vast interest in body modification for quite some time now.

In a 2017 interview with French newspaper Midi Libre, he explained how a childhood interest in bodybuilding developed into a new interest in body modification, which he has now dedicated his very existence to.

He doesn't quite know where this fascination stemmed from...

He said, "From a very young age, I have been passionate about mutations and transformations of the human body."

Everything clicked when he was twenty-four and was working as a security guard.

"I realized that I was not living my life the way I wanted. I stopped everything at 24 and left for Australia." He doesn't say what happened in Australia to make him want to become a "living alien", but since he's been back in Europe he's thrown himself into it wholeheartedly.

Over the years, Anthony's modifications have gotten more and more extreme.

He's tattooed almost his entire body with black ink, he's had his ears removed, his eyeballs have been tattooed black, and has had dermal implants put into his face.

He's had his tongue split in half and tattooed green. Because of course he has!

Anthony's bizarre look has attracted more than 182,000 followers on Instagram...

And he spoke of how he loves seeing people's reaction to his terrifying appearance and enjoys acting up to people's sense of wonder and dread, but is sure to keep his behavior and interactions "respectful".

"In general, they end up leaving me alone. I love getting into the shoes of a scary character. I often settle down somewhere and play a role, especially at night in the dark streets, he has fun. I explore the contrast between the role I play and myself."

But just when we thought Anthony couldn't go any more further with his modifications...

He has now undergone a procedure to remove his nose. Yep, you read correctly... and people are freaked out, to say the least!

And unbelievably, he seems happier than ever now following his rhinotomy, which is the medical term for a "nose amputation." "Thank you to you @oscarmarquezbodymod you will have marked my life... now I can walk with my head high thanks to you, I am proud of what we did together," he wrote on Instagram.

But, after seeing his before and after picture...

People were even more shocked.

Check out the before and after...

And it's truly jarring to see how Anthony has made himself completely unrecognizable with his strange modifications.

But as long as he is happy, that is all that matters!

For more like this, scroll on to check out the model who's butt was so big she couldn't sit down for 6 months after botched surgery...