Man Who Made Fun of Tiny Dogs Gets Saved by a Chihuahua, Devotes His Life to Rescuing Them | 22 Words 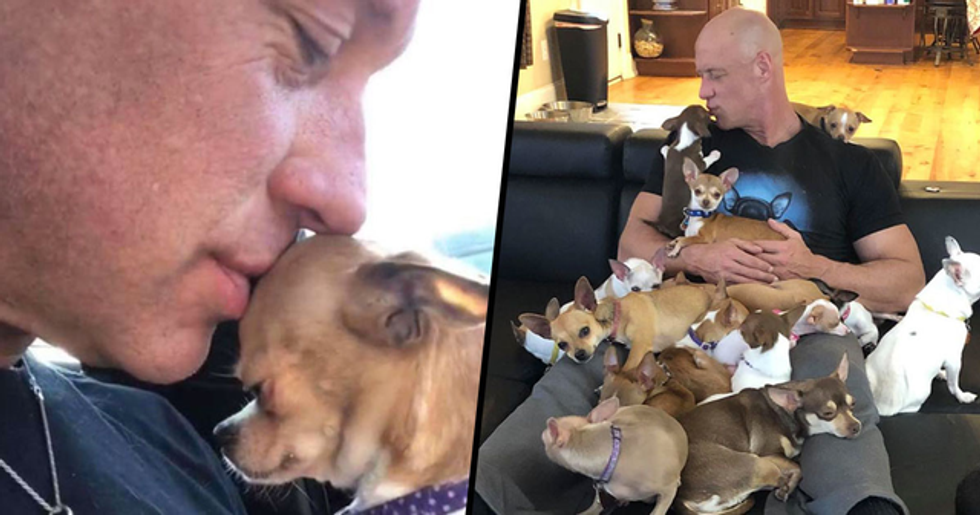 Man Who Made Fun of Tiny Dogs Gets Saved by a Chihuahua, Devotes His Life to Rescuing Them

Let's be honest, must of us here have sniggered at the prospect of owning a tiny dog.

Though a select few people love miniature dogs, many of us prefer the larger breeds and often turn our noses up at the smaller, yappier things. And Bobby Humphreys was always one of these people - He could never imagine himself having a tiny dog by his side, and would often make fun of the little dogs and those who owned them.

That is, however, until a miniature pooch saved his life.

Bobby was at a crossroads in his life when a Chihuahua named Lady came into his life and changed his perspective entirely. The pooch transformed Bobby's life, and he now devotes all of his time to rescuing hundreds of abused and abandoned Chihuahuas in his Big Guy, Little World sanctuary.

This is the man who dedicates his life to saving Chihuahuas.

He has given up everything for his love of Chihuahuas.

He has drastically turned his life around.

Humphreys, from Maryland, used to spend most of his time in the gym and would lay specialty hardwood floors for his living.

He also used to be a competitive bodybuilder...

And, just when you think his life couldn't become any more masculine, he and his ex-wife owned 3 rottweilers because he admired the breeds’ "regal, imposing look."

His passion used to lie with the Rottweiler breed.

And any big dogs, for that matter. “Rottweilers were my companions, guardians, 120-pound lapdogs," Humphreys told Bored Panda. “It’s very well known that, while I’ve always loved all animals, and even had small dogs in the house growing up from my grandmother from time to time, that I was a big dog guy."

And he admitted to mocking his friends over the minuscule breeds.

“I’d actually make fun of close friends whose girlfriends had tiny dogs when I saw them walking around carrying them for their girls," he confessed. “Looking back, that was very immature of me."

But his life suddenly changed in 2016.

On New Year's Eve, Bobby's wife suddenly and unexpectedly walked out on him.

For the first time, Bobby found himself well and truly alone.

And, just a week later, he severely injured his shoulder at the gym, requiring reconstructive surgery.

His recovery was a long one...

And, being so alone, he had no one to properly rely on, thus slipping into a deep depression. “I’m a very sensitive person and she was my world," Humphreys explained. “I was lost. I started drinking for a purpose instead of just socially."

But one day, his life changed forever.

Humphrey's friend, Constance, owned a pet Chihuahua named Lady and needed someone to look after her while she was away... And she knew the perfect guy. “She messages me one day saying, ‘Do you mind if Lady stays with you for a little while?'"

Despite disliking small dogs at the time, Bobby reluctantly agreed to take care of Lady.

To begin with, Lady was incredibly nervous about Bobby and stayed hidden in her kennel.

So he decided to coax her out of her kennel. "Screw it, I don’t care if this dog bites me or not, she is not going to be sitting in a kennel," Bobby recalled.

And something miraculous happened...

Lady was eventually coaxed out of her kennel and, despite being nervous around most people, she grew to absolutely adore Bobby. “This dog hated absolutely everybody. She had been known to bite numerous people." Bobby recalled. "Nobody could get close to this dog. Nobody. But, within an hour and a half of being together, she and I had been inseparable ever since."

Over the next few months, Bobby spent more and more time around Lady.

And he credits the pooch for bringing him back to life. “Lady did not just transform my opinion, she transformed my life," Humphreys said. “What didn’t she do? She gave me my self-respect and dignity back. After everything I’ve been through; humiliation shaming, abandonment, and everything else, she gave me the reassurance that I wasn’t such a bad person after all."

Bobby had found his new passion in life. He began searching for his own dog, considering that he couldn't have Lady to himself.

But this little pooch came with many issues, including severe food-aggression problems. Little Kira's behavioral issues opened Bobby's eyes to how some unfortunate dogs are treated. "I saw her living conditions. I saw how easy it is for people to sell dogs on Craigslist and how little they really care about where the dog goes."

Bobby threw himself into helping the little dogs in need...

And it wasn't long before people began approaching Bobby for help...

Bobby began helping other people with their issues with their own dogs, or abandoned dogs they had found. “A hoarding case here, a shut-in there. A bait dog. A dog found on the side of the road. A dog with an extension cord tied around his neck," he recalled, "The more this progressed, the more I loathed society."

But these horrific examples only fuelled Bobby's motivation.

“I made a promise to each and every one of them that they would never have to experience abuse, neglect, abandonment or the pain of loving someone that would not give you love in return no matter how much you tried."

And, over the years, his passion evolved into a sanctuary.

Big Guy, Little World aims to rescue and rehome abused and abandoned Chihuahuas. And Bobby's philosophy is simple: He takes in the dogs nobody else wants, shows them how special they are, and he lets them live whatever life they choose.

Bobby relates to these animals on another level.

Any Chihuahua, regardless of its appearance, disability, or traumatic history, is welcome at Big Guy Little World.

And Bobby aims to rehome as many unwanted dogs as he can.

“Once I’ve earned the dogs respect and bonded with the dog, I am obligated to them to make sure the only way they leave me is if they found somebody they like even more."

And if they can't be rehomed?

They will simply live out the rest of their days at the sanctuary under the loving care of Bobby. “The rest will happily stay here regardless of their conditions or their differences. Or their oddities. They will be celebrated for how beautiful and unique they are and once again never have to worry about anything again."

Bobby is just a big guy, trying to make a difference in a smaller world.

And thousands of people have shown their support of Bobby's sanctuary, with one social media user commenting, "Lovely man. Thanks for being the rescue home with love", while another commented, "God bless you, my Chihuahua is my world, thank you for sharing your heart with these tiny but mighty souls." What an amazing man.