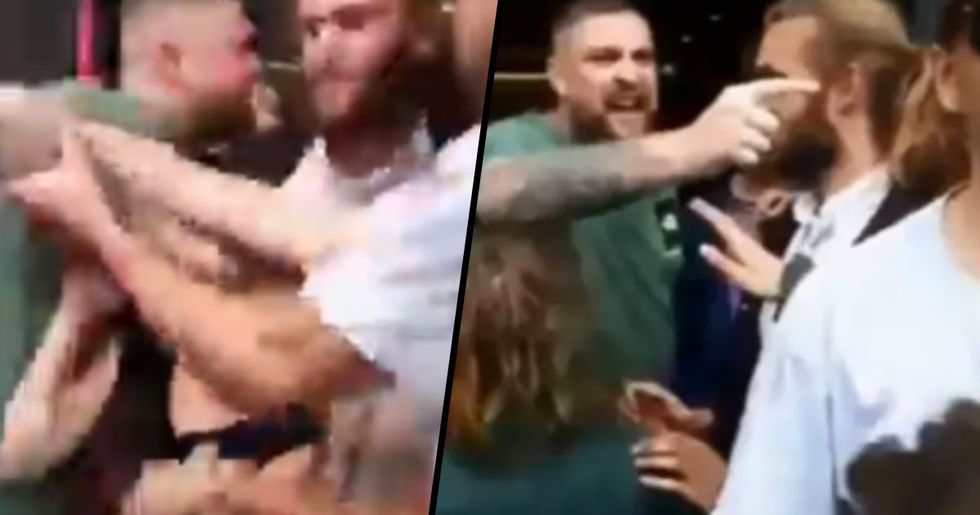 In the wake of the so-called climate crisis, climate change protests are happening all across the world. Most famously, you'll probably be familiar with the school strike protests spurred on by teenage activist, Greta Thunberg.

But now, a new wave of action is being taken by the environmental pressure group, Extinction Rebellion. Over the next 2 weeks, the group is carrying out what they describe as their biggest movement yet, with more than 850 events planned across sixty cities worldwide to take a stand against climate change.

This means that activists in the likes of Denmark, Germany, France, Spain, Australia, India, New Zealand, and the UK will be taking part.

But one man wasn't happy with the disruption the protests were causing outside a burger chain in Denmark. Feeling pretty hangry and with the protesters blocking the entrance, all hell broke loose as he pushed his way through to get a burger.

Keep scrolling to see the footage...

Climate change is a serious issue.

Several “climate deniers" believe that the rapidly rising temperatures is simply a result of the earth’s “natural cycle," just like the ice age. Although this has since been proven wrong after experts established that the climate change that we are experiencing is on a scale that far exceeds temperature fluctuations during the last 2 millennia.

If the future of our planet wasn’t looking bleak enough, experts have now shattered the “we’ve got twelve years left" to act theory, claiming that political steps to enable the cuts in carbon need to take place before the end of next year, otherwise we will be in a very dire situation.

Greta Thunberg has somewhat become the face of the climate change movement.

The teen has drawn in praise from many for raising awareness over the risks posed by climate change while holding politicians to account. Known for her matter-of-fact manner of weighing into the issue, Thunberg is a champion of the modern climate change movement.

And with protests regularly taking place across the globe...

The movement is now gaining support and attention on a grand scale.

But there's a new wave of protests taking place...

Over the next 2 weeks, environmental pressure group, Extinction Rebellion, is carrying out a period of "civil disobedience" in what they describe as their largest global movement to date. They call this the "International Rebellion," which began on October 7.

Protesters for the group in the UK lost control of a hose as they tried to splatter the government building with a red substance.
According to Ladbible, the footage was released showing members of the group - who were using a decommissioned fire engine during their stunt - as they struggle to get control of the powerful hose, covering themselves and the building in "blood" during the process.

Kicking off this week, more than 850 events are planned across sixty cities worldwide.

Activists in the likes of Denmark, Germany, France, Spain, Australia, India, New Zealand, and the UK will be taking part.

The group aims to use non-violent civil disobedience to compel government action against issues surrounding the climate "emergency."

On Sunday, activists taking part held an opening ceremony in London as an official start to the protests.

And now, the protests are well and truly underway.

A spokesperson for the group explained: "The next two weeks will involve marches and family-friendly events, there’ll be some spicier actions as well and some will be arrestable. "We’ve had 4,000 rebels sign up and say they are willing to be arrested – which is a huge increase on the number arrested in April of 1,000."

But, one man in Denmark wasn't happy with the disruption some of the group's demonstrators were causing.

Activists in Aarhus, Denmark, are taking part in the protests, but footage has gone viral of them landed themselves in trouble with one hangry man.

The group was blocking the entrance to a burger chain in the Danish city.

The protestors, who can be seen donning the Extinction Rebellion flag, clearly got on the wrong side of a man who was determined to get a burger.

In the footage, the furious man can be seen shouting at the activists.

He wasn't impressed by being denied his burger fix.

As the man became increasingly irritated, he starts pushing his way through the group of demonstrators, while screaming at them - telling them to "f*cking move."

And one protestor can be seen to grab his arm to defuse the situation.

But that only made matters worse...

The man can then be seen turning back to the protestor and angrily threatening to hit him. He then turns around and calls the campaigner's "******* hippies."

It seems nothing was getting in the way or him and his burger.

He eventually made his way through, but it's clear it wasn't without a fight.

Watch the full footage below:

It gets very aggressive, very quickly...