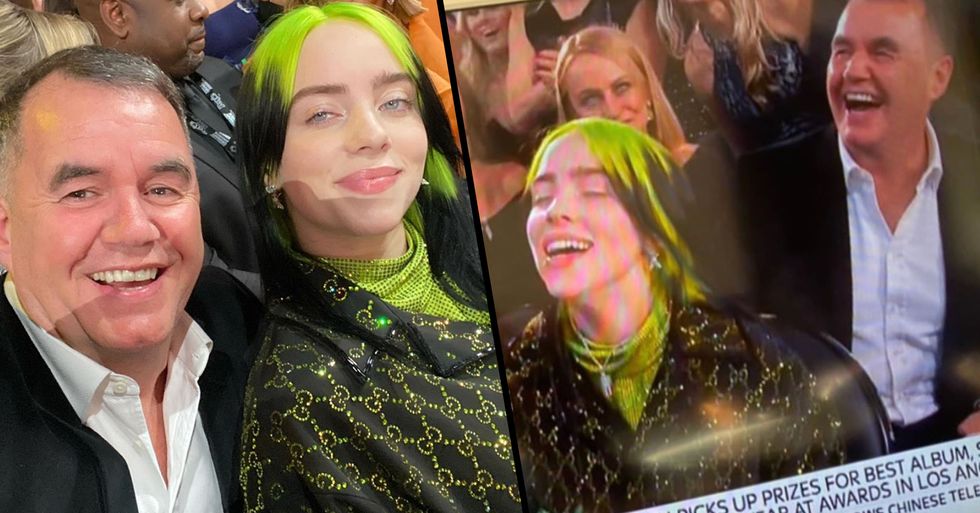 Billie Eilish is an incredibly successful young woman - but not to everyone, it seems! At this year's Grammy Awards, the man placed next to her was utterly bewildered by the teenager superstar.

But apparently, since the event, the tides of turned - and now he's loving Eilish (just like the rest of the world).

It also gives her music quite a different sound...

And sadly, people have already attempted to exploit and body-shame the teenager. Even when she was as young as fifteen, online trolls were trying to sexualize her for no apparent reason.

But it seems there are some older gents Billie has no fear of.

As a hilarious (and surprisingly wholesome) encounter has proven this week.

Because in spite of being one of the most awarded artists of the year ...

It seems there are still some people for whom Billie Eilish has completely passed them by.

This year's Grammy Awards were a huge night for Eilish.

But an unsuspecting audience member got rather close to the superstar.

This is Terry George, from Leeds, UK.

He struck luck winning a lottery to be chosen as a seat filler at the 2020 Grammy Awards.

And he certainly made the most of the night.

Not only was he lucky enough to go to the prestigious awards, but his seat allocation was a further stroke of luck.

Because George ended up next to none other than Billie Eilish.

But to make it even funnier?

George had no idea who Eilish even was. "When I heard the name over a year ago, I thought it was 'Billie Irish' and it was a standup comedian."

"The amount of young people who have been messaging me and saying 'I can't believe you've touched Billie Eilish, you've met her, you've been next to her,' they're absolutely in awe of me."

"I've created a whole new fan base of young relatives and friends who all want to ask me about Billie Eilish, and she appeals so much to the generation of today."

Eagle-eyed fans can see George throughout the ceremony.

“Please don’t be me. Please.” Billie Eilish being genuinely disgusted by her own success is one of the most hilar… https://t.co/3LZePNOyWG
— Joey Nolfi (@Joey Nolfi)1580100155.0

Here he is during that iconic moment when Billie prayed not to win an award.

Here he is in the background of a candid pic of Eilish with Erykah Badu.

He said Eilish was, "seemed very, very ordinary, very grounded and quite chuckly."

"She was kind of embarrassed to win all of them, and when it came to the next one, and certainly the third one, she was clenching her hands and thinking 'oh not me, not me, not me.'"

And in spite of being totally Eilish ignorant?

I’m a bit embarrassed because I also thought @LewisCapaldi like me was a seat filler. worse than that people kept a… https://t.co/SAZKF9FjcO
— Terry George (@Terry George)1580169873.0

George now claims to be "such a fan."

"I think she well deserved winning this award."

"Having had this whole experience on the way back from the airplane, I listened to her whole album and absolutely love her stuff," he said. Fancy more Grammy's content? Scroll on for the comparisons between stars' first and most recent awards ceremonies. Some a pretty shocking!