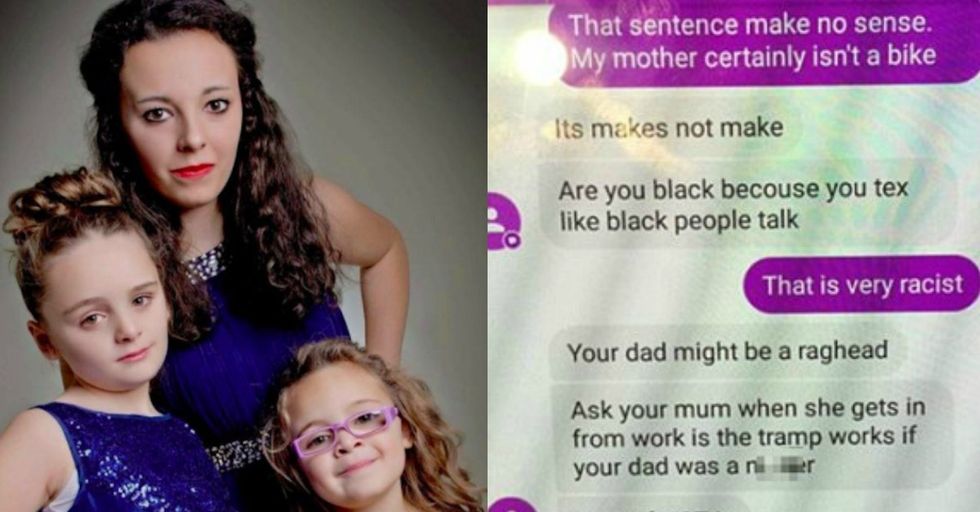 Kids can be a handful, but it's true that most everything they learn is picked up from someone else.

Most parents know this before they set out to chastise children for behavior they probably learned from someone else.

Once in a while, as a mortified parent found out, a kid will say something so out of line and ridiculous that their parent isn't even angry.

As you'd imagine, any responsible parent would immediately seek out the influence on their kid.

Presumably, when something so ugly is said, that influence would get cut out of their life altogether.

What do you do, though, when the bad influence is an adult?

Things get a little trickier.

To FURTHER complicate the issue, what happens when the subject matter at hand isn't just sensitive...

...but outright racist? One mom had that very unpleasant decision to make. See how the story unfolds.

Manchester mom Gill Turner was shocked when her autistic daughter Millie-Grace asked if it was “okay to call someone a n*gger?"

She was even more shocked, and disturbed, when she realized that her daughter’s question was prompted by a series of hateful, racist texts sent by Dean Sheridan, the father of one of her daughter's classmates.

Sheridan fully admits to sending the racist and vile messages, saying they were in defense of his daughter.

He claims his daughter had received nuisance calls from Millie-Grace while off from school with a broken leg. "Millie-Grace walks to school with the man's daughter and they had been involved in a typical incident of pre-teen banter," Turner said. "My daughter had been messaging this girl and she had been messaging back, but this man got hold of his daughter's phone to get Millie-Grace's number and in the space of one day she had received seventeen text messages from him."

The fact that he freely admitted to it says a lot.

As you can see, they escalate quickly and even threaten violence, but Millie-Grace has NO problem handling them herself.

This is absolutely nuts, isn't it?

It may not be as bad or as painful as the racism, but there's another chilling aspect to this man's messages.

The racism is clearly the bigger trespass here, but anyone who spells that poorly shouldn't be allowed around kids, either.

Gill says that her daughter is on the autism spectrum, so she doesn’t correct people’s grammar to be snarky, it’s just an aspect of her personality.

“You just don’t expect that behavior from a grown adult," Gill said. “He threatened me and Millie’s dad with physical violence. I texted him and said I had saved the messages and that I would be reporting it to the police."

As for Sheridan, he maintains that his racist remarks were because his daughter was being harassed.

No you do not.

If you'd like to find some other lessons around here, it would seem "Don't be racist" and "Don't be racist around other people's kids" are two pretty profound takeaways.