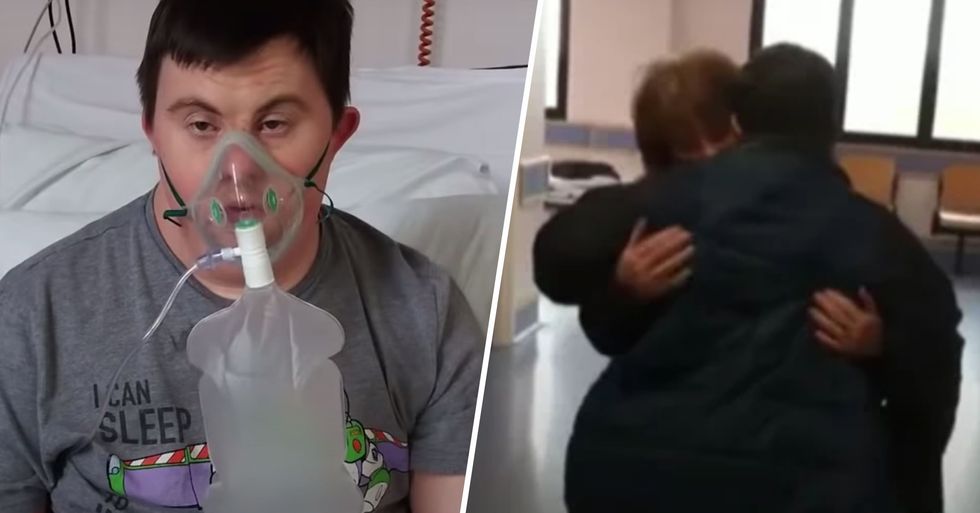 A man with Down's Syndrome was sadly tested positive with the deadly virus and he was given days to live... but he has completely defied all odds.

Down's Syndrome is a genetic disorder that affects many people around the world...

But what exactly causes Down's Syndrome?

Down's Syndrome occurs when an extra copy of a chromosome is present at the time of conception... Specifically, a full or partial copy of chromosome 21.

But many people with Down's syndrome can go on to live full, independent lives...

Sadly, there is a stigma around the disorder...

And there are way too many cruel people out there who make fun of those with Down's Syndrome.

But never the less...

So many people with Down's Syndrome continue to defy the odds and they go on to live long and happy lives.

And one young man is a prime example of this...

This is Ben McCafferty, and he is a thirty-four-years-old from Yorkshire in the U.K.

But sadly, Ben falls under the category of those at "high risk" of contracting the deadly virus.

We are all well aware of the pandemic crisis spreading across the globe, and the U.K. is now the fifth-worst affected country in the world.

And he was soon diagnosed with the virus when placed in isolation in his local hospital.

Ben's mom, Diane, and step-dad, Neil, were unable to visit, which made things even harder for the family as a whole.

Ben had been put into palliative care because he was not expected to live another twenty-four-hours...

And his family had to sit back and prepare for the worst.

But something remarkable happened over the weekend...

Ben was discharged from hospital after being quarantined and treated for 2 weeks - and he was finally reunited with his mom.

The heartwarming moment was caught on camera...

In the clip filmed by his step-dad, it shows Ben heading out of the hospital ward to be surprised by his mom, who he has been apart from for weeks.

He is clearly overjoyed to see his mom...

And Neil goes on to say how if it wasn't for the hospital staff, Ben wouldn't be here right now.

Speaking to local media about the ordeal, mom Diane goes into detail about her experience.

"It was euphoria when he came out and was just chatting to everyone... and to just see him coming back out and walking after the state he was in when we took him in," she explained.

Ben's step-dad, Neil, was the only person allowed to be with him during the ordeal.

"We were told that realistically, there's only a 1 in 10 chance of survival," Neil explained about when they first took Ben into the hospital.

But they always held on to that glimmer of optimism...

And just 2 weeks after his diagnosis, Ben was tested negative for the virus and he was soon back at home where he belongs.

Ben's community has come together to show support for him and his family...

⁦@BTHFT⁩ a huge thank you to ⁦@Morrisons⁩ for the generous donation for Ben, one of our patients being discharged t… https://t.co/qE6oIRQmmV
— karen dawber (@karen dawber)1587217144.0

And with the help of the local supermarket, a generous donation was put together and made to the family.

Ben was also given a guard of honor when he left the hospital...

Which is something he and his family most certainly won't be forgetting.

We wish him and his family an easy road to recovery. Make sure to keep scrolling to learn about the girl with Down's Syndrome who went on to be a fashion model...