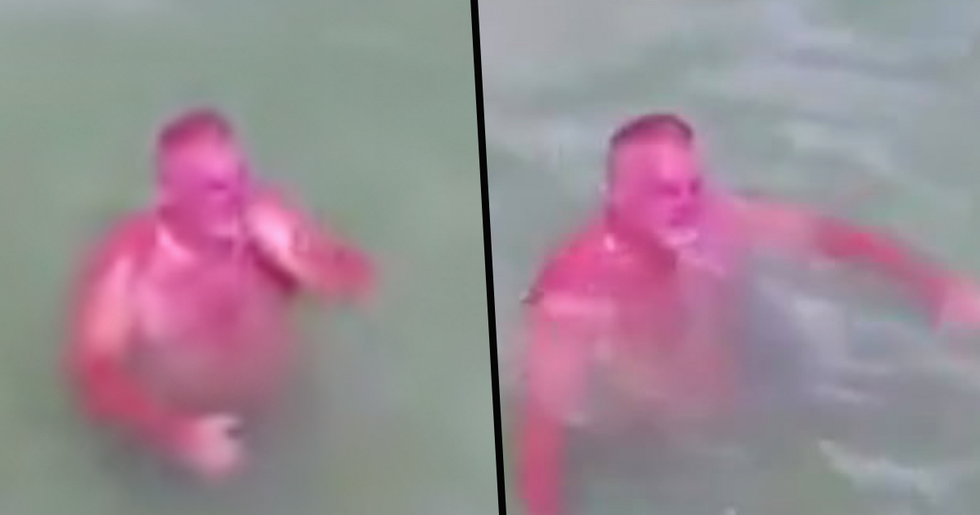 Man With Horrible Sunburn Spotted Swimming With Stingrays in Florida

Without question, the art of making memes took a giant leap forward in the last ten years. It used to be that all anyone could do was make a four-panel comic with poorly-drawn stick figures. Now, as the sheer number of memes with which the internet could play with has expanded every single week, meme-creators now have multiple images to play with, like an artist choosing between oil paint and guache.

And so, we have to take a look at some of best memes we've ever had, including a new video of a victim of sunburn which has elicited some pretty hilarious, meme-worthy reactions...

When The Mandalorian launched this year on the newly-debuted Disney+, there were rumblings of a huge twist at the end of the first episode. Little did we know that said twist — the reveal of Baby Yoda — would give us not only a huge revelation within the Star Wars mythos, but also a cute little snuggums that we could make internet jokes about for the next decade.

Also known as "Bone Apple Tea", this meme is about collecting the instances of people thinking they know how to say a common phrase — like, say, "bon appetit" — but saying it completely, hilariously wrong ("Bone App the Teeth").

In 2014, a picture of a cute guy working at Target posted to Twitter went hyper-viral because, well, the guy was cute. Alex himself was one of the first internet celebrities to go through a VHI Behind The Music-style rise and fall with internet fame, dropping out of school to become an Influencer before giving it all up and going back to regular life (maybe Target was hiring?).

A video of a bomb dude named Daniel rockin' them white Vans gave memers their shorthand for "cool." Before, they had to tell your friend their new threads looked "sick" or "fresh." Now you can just say "daaaamn Daniel" and move on with your day.

Drake provided us with a lot of memes throughout the decade, but none has had the staying power of the "Hotline Bling" one-two punch — it's the perfect meme to communicate the idea that one thing sucks, while another thing? Well, that other thing is very cool.

Whether we're talking about a new Star Wars movie's take on female empowerment or Brexit, we've had to sort through a lot of nuance this decade. And the Confused Math Lady? She is the embodiment of the next-level thinking we've had to do in the 2010s.

How do you tell someone you're angry, but in a way that isn't scary? Why, you send them a picture of an adorable cartoon antelope clenching his fist, of course!

Just one time, Drew Scanlon of video game website Giant Bomb was so confused on a stream that he did a subtle double-take. And that was all it took to give the internet a perfect image depicting what it feels like to be so stunned you involuntarily blink.

Being a VSCO girl means wearing great big ol' t-shirts, slapping an environmentally-concious "Save the (BLANK)" sticker on your Hydroflask, and wearing scrunchies around your wrist. It's a testament to the power of memes that one can so perfectly capture the kind of girl we've all seen down at the beach (or, for the more landlocked amongst us, on the Instagram-like app VSCO).

I haven't heard that name in years.

Old Ben Kenobi hadn't heard the name "Obi-Wan" in many years, but this decade, there were countless people who relived their past lives (usually while smoking a cigarette, as the nostalgic so often do).

Sometimes, a meme can be very, very simple. Doge is a cute-yet-mischievious-looking dog who speaks in weird, stunted little sentences, generally about how impressed he is with whatever he's seeing. It is very cute and very strange, and maybe that's all we need to fall in love with a meme.

Shrek is love, Shrek is life.

A perfect example of how random memes got, a corner of the internet decided that they not only liked the movie Shrek, but that it mean everything to them. To them, anyone who wasn't expressing a slavish devotion to the Mike Myers-voiced ogre was committing a grave sin, and would not be welcome in their New World Order.

Sure, the idea of eating Tide Pods is gross (and potentially deadly), but also... they just look so good. Eating a Tide Pod would probably be like eating a giant Gusher, and the internet spent much of this decade fantasizing about what it'd be like to chow down on them.

The best memes have a hint of truth to them, and with as scary and upsetting as the decade's been, it's no surprise that a meme about a cute little dog doing his best, despite the destruction all around him, to just live his life.

To see the greatest basketball player of all time breaking down in tears was a powerful image. No wonder it gained so much traction when memers wanted to make fun of literally anyone showing any emotion whatsoever.

Has anyone, or anything, provided more memes in history than SpongeBob Squarepants? From Caveman SpongeBob tapping into our most primal urges to the scene where SpongeBob shows Patrick multiple examples of what he's so wrong about to the bug-eyed mock-chicken that got us all tYpINg LiKe tHis to convey mocking tone, it seems like there was a new SpongeBob meme every few days.

There's nothing funnier than when someone loses their mind over something inconsequential, and that is perfectly summed up in the wild ravings of the Real Housewives alum pictured in the left picture. And that cat? That cat doesn't care. That cat's just living its best life, sitting up at the table like a person. we should all strive to be that cat.

Spider-Man: Into the Spider-Verse is not only the best Spider-Man movie (by a long shot), it brought the concept of multiple Spider-Men to the masses. But it wasn't the first Spider-Man to do so — the 1960s Spider-Man cartoon gave us this iconic images of two Spider-Men pointing at each other, realizing that, hey, we're not so different after all!

This meme came from the internet's core-deep desire to be told they are beautiful by Ryan Gosling.

The internet's dumped tons and tons of information on us about celebrities of all kinds — oftentimes, too much information. The cold reality of learning your heroes aren't who you thought they were was perfectly encapsulated in the unfortunately racist Milkshake Duck.

But the newest meme to take over our lives comes after ABC News posted a video on Twitter.

The video was recorded in Florida (of course) and shows us how close a bunch of stingrays were swimming to beachgoers.

But rather than raising some awareness about the dangers of swimming in the sea...

The video elicited some hilarious responses after the camera caught an extremely sun-burnt guy amongst the ripples. Keep scrolling for the full video.

And naturally, the internet just couldn't get over it.

This user asked if "Satan" was having a swim.

"Are we going to ignore the dude trying to get skin cancer," this user also wrote.

I mean, suncream would have been a good idea.

Here is the main star of the show:

Can someone take this guy to the emergency room please?

And of course, the memes came pouring in...

I didn't know he moved either.

Others tried to help him in their own special way...

But it didn't really work out...

I laughed a little too much at this one...

I didn't know he could swim.

If you want to see what other memes took over once lockdown started, then keep scrolling...