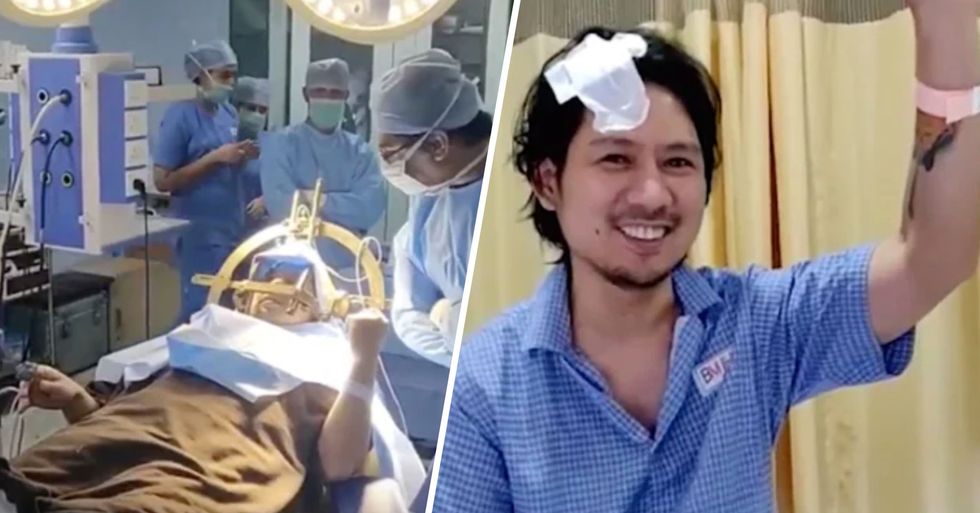 The incredible moment, which happened in the Indian city of Bengaluru, is a groundbreaking step forward in the search for a cure for the devastating neurological disease.

Keep scrolling for the full story, and to watch the amazing moment for yourself...

The disease, which typically affects those over the age of fifty, progressively disturbs muscle movement throughout the body.

This results in uncontrollable tremors and shakes.

The smooth and controlled muscle movements which we experience are made possible by a chemical in the brain called dopamine. But, in Parkinson's sufferers, these dopamine levels are reduced.

The uncontrollable trembles and distorted movements, which are the typical symptoms of the disease, start to appear.

These symptoms can be completely devastating...

And most commonly result in sufferers being unable to walk unassisted, perform basic day-to-day tasks and, in more severe cases, even to talk.

The condition is chronic and only worsens with time...

And it affects a staggering number of people across the globe. According to Health Line, more than 50,000 new cases are reported here in the United States each year, and the disease has become the fourteenth most reported cause of death.

The exact cause of the disease still remains unknown.

It is believed that Parkinson's may have both genetic and environmental components, while some scientists think that viruses can trigger the condition.

A tremendous amount of research has been put into the disease...

And medical researchers have been working tirelessly for decades to determine a solution for Parkinson's sufferers.

A number of different methods are currently used to ease the symptoms.

This includes speech therapy, occupational therapy, and physical therapy. A number of different drugs are also used to treat the condition.

But, despite all of this...

There is still no known cure.

Various surgical procedures have been performed in an attempt to eradicate the disease...

With the most successful so far being deep brain stimulation (DBS), which involves electrodes being implanted in specific parts of the brain.

Though DBS works as an effective treatment...

It doesn't fully eradicate the condition from its sufferers, leaving researchers still searching for a more permanent solution.

But now, there has been a glimmer of hope in the otherwise gloomy fate for Parkinson's sufferers.

In what doctors are deeming as a "medical milestone", a Filipino man who had been living with the disease has been seemingly "cured" after groundbreaking brain surgery in Bengaluru, India.

Jose Alvarez's life had been brought to a halt as a result of the neurological disease...

Alvarez struggled to walk, talk, and even eat and drink unassisted, and had been forced to quit his job as a guitar player.

The new surgery, in basic terms, involves a circuit being burnt into the patients brain in order to destroy a small area of brain cells.

And, for Alvarez, the surgery has seemingly worked a miracle.

Because, almost immediately after the surgery had commenced, Alvarez's tremors and shakes suddenly began to ease.

Alvarez was awake throughout the full duration of the gruelling operation...

And, at the start of the video, his hand and foot can be seen relentlessly shaking and trembling.

But, as the doctors begin to operate...

His tremors begin to gradually ease.

Upon the completion of the surgery, the patient is then asked to raise his arms...

And he obliges, successfully holding them aloft without a tremor in sight.

It is a truly remarkable sight.

Post-surgery, Alvarez can be seen sitting up, talking, using his phone, and walking confidently throughout the hospital without the debilitating symptoms of his illness.

Alvarez's tremors, though not fully cured...

Have eased significantly, and he can now reportedly speak without any difficulty.

The operation has proven to be life changing for Alvarez.

According to the New York Post, the rehabilitated musician is once again “able to stand and walk, perform routine activities like bathing, dressing, eating food and drinking water," which he was unable to before his surgery.

Thanks to the pioneering operation, Alvarez can live life to it's fullest.

“Doctors have given me a new lease of life," Alvarez explained emotionally. “Life has been my best so far but I now experience freedom."

You can watch footage from the incredible operation here...

Which stands as a remarkable step towards an official cure for the disease.

Undergoing major surgery can be a terrifying experience...

So one hospital decided to make the experience as fun and enjoyable as they could for their younger patients... Keep scrolling for the full story.