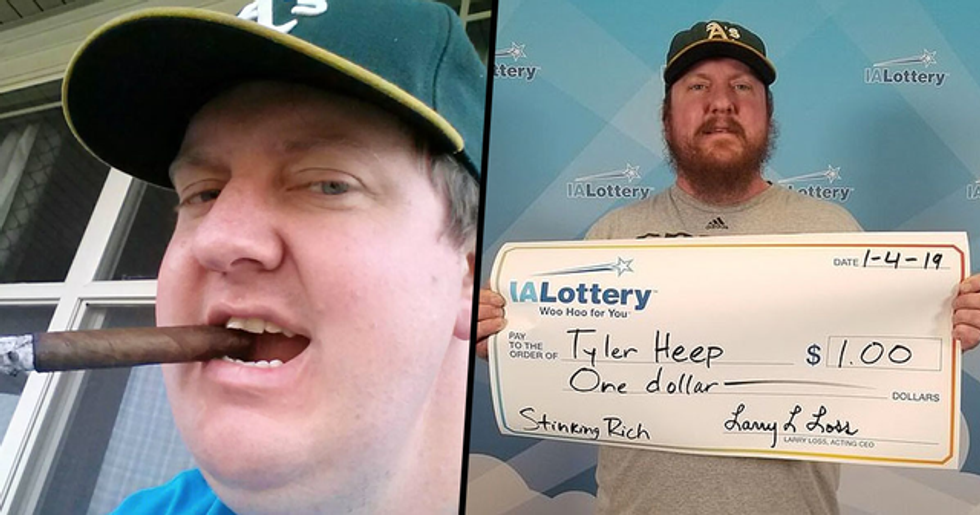 Many of us dream of winning big on the lottery. The life-changing amount of money is a rich source of fantasy - whether it be travel, property or just some luxury goods, it's fun to waste away an afternoon thinking about how you'd spend your winnings. And accepting that giant check is all a part of the fantasy.

Well, it seems we aren't alone in our giant-checked dreams. An Iowa man celebrated his lottery "win" in the traditional way - in spite of the fact his jackpot was a single dollar. Tyler Heep, from Urbandale, Iowa, celebrated his scratch card win by driving down to the lottery headquarters and demanding the big-check treatment.

The branch clearly liked Heep's attitude, and gladly obliged, offering him the giant check usually reserved for the truly big cashouts. Perhaps Heep only won the equivalent of another scratch card - but he certainly looks every inch the winner.

Winning the lottery is a pipe dream for many of us.

With prizes of millions upon millions of dollars, a lottery win could change anyones life.

The vast majority of US states offer lottery participation.

In fiscal 2018, US citizens spent upwards of $77 billion on various lotteries, up from a measly $5 billion in 2017. Clearly, people want in on the action.

Needless to say, the majority of tickets are not big winners.

Even if you do win, you probably won't win big.

A huge majority of lottery "wins" are more menial sums of money - sometimes, less than it even costs to purchase a ticket in the first place!

Which is something Tyler Heep learned this weekend.

The Iowa resident had a pretty funny experience when he purchased a lottery scratchcard. It turned out to be a winner - at least, technically it did.

After he scratched off the card, Heep discovered his win.

The only problem? His "winnings" were just one lowly dollar - hardly worth celebrating. Or at least, that's what some people would think.

Heep had a different attitude.

He was of the belief that any win was worthy of celebrating - no matter how small it may seem.

After all - a dollar is a dollar.

And when the world can often seem bleak and dark, we think celebrating every win should be encouraged!

So when Heep saw his victory, he seized the moment.

Heep decided to drive down to Des Moines, where his state's lottery headquarters are located, to celebrate in style.

Apparently, the headquarters were on board with his plan.

The lottery team were happy to celebrate Heep like the winner he was.

He wanted the luxury afforded to all of the lottery's biggest winner - the iconic giant check!

Here he is - looking every inch the lottery winner.

He shared the image of himself on Facebook on January 4th - and the picture garnered some internet attention.

Here's a closer look at the cheque.

Yes, it says "Stinking Rich" in the bottom left corner. On commenter pointed out the ironic name of the lottery signer. Heep replied to the comment saying "Last guy's name was "Terry Rich" no joking."

Getting the check was clearly what mattered to Heep more than the sum of money.

Another comment on the Facebook post asked "I got one that says free ticket u think they will give me a big check??" Heep replied "Probably."

Apparently Heep was treated well at the lottery headquarters.

"They decided to treat me just like a million dollar winner. The guy came down the stairs and they took me into the back room where the camera was with the Iowa Lottery logo." Heep told NBC News.

This video, by Global News, shows hosts laughing at Heep's stunt, pointing out he had to drive a long way to pick up his "winnings."

People are a fan of this guy's attitude.

One of the top comments praises his resource-wasting abilities, saying, "That's so funny, Cost more to print the check and 10 X to go pick it up."

And we know exactly what you're wondering.

How exactly did Heep manage to spend all of his winnings? What did his grand prize go on?

Well, according to reports, Heep has already spent the money.

The one dollar went towards "half a tank of gas," claims the big winner. Well, there are certainly worse things to spend your money on.

Some people had some questions, though.

The primary one being, why? Or, more specifically, why bother driving all the way to the lottery headquarters to get the check, which wouldn't even cover a fraction of the gas for the trip?

But Heep had a different attitude.

Heep said on Facebook, "I told them I'd like one of those big ceremonial checks as payment. I figured it would be worth a shot and they all thought it was really funny. I'm surprised nobody else has done this before."

One Twitter user wrote, "A journey of a thousand (millions) steps, starts with one, his dreaming big, to you and I, it's a dollar, to him it's a million, go on son!!"

Some thought his actions sounded a little familiar.

One reply to the article said, "Sounds like the sort of thing I'd do, to be fair to him." Another simply reads, "This is definitely me."

People loved Heep's dedication to the check-collection. As one Facebook user put it, "At least he puts a smile on everyone's face."

Others had a good laugh imagining what he did with his winnings.

One commenter joked, "He should give the money to charity." Another gave a typical lottery winner warning - "Don't forget to pay your taxes."

It seems Heep has followed at least some of the internet's advice.

Heep has had his prizewinning check framed to show it off. He said in another Facebook post "Thanks to The Art of Benjamin B. Purvis and his custom framing shop for offering to frame my big one dollar lottery check. His artwork is fantastic."

We would for sure do the same thing.

Maybe a dollar isn't much of a prize - but the memory of being an official lottery winner is far more valuable. We wouldn't want to forget that in a hurry!

"The U.K. Daily Mail picked up on this post and mentioned your shop Benjamin B Purvis. So cool." he shared on Facebook.

Tyler Heep - we salute you.

Maximising the potential out of any positive situation is a skill worth having. Plus, he's managed to make us all laugh along the way. Thanks, man!