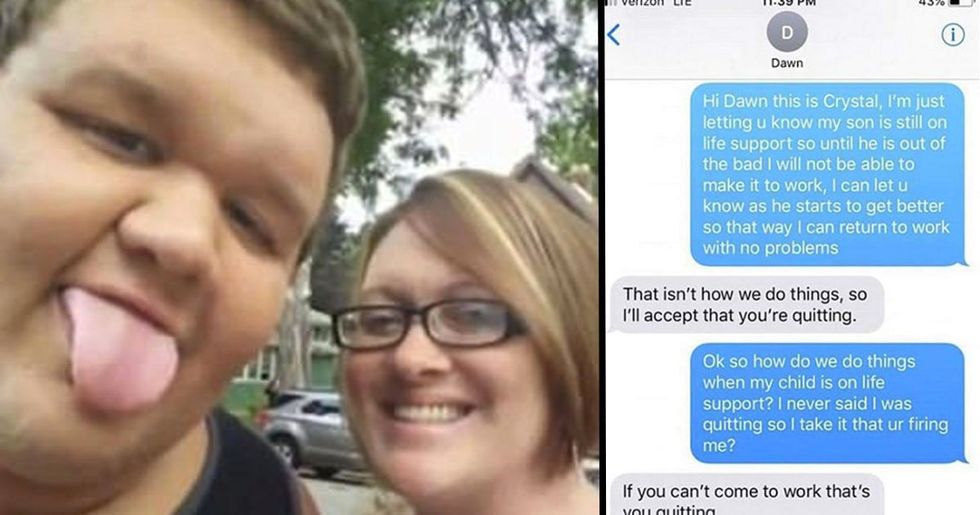 When it comes to running a business and managing employees, being kind and understanding can take you very far.

The only way that a manager can gain respect from their employees is by being patient and accommodating to the individual needs that a worker may hold.

A manager truly experienced karma in Albion after she showed nothing but arrogance and disrespect to one of her employees who needed time off work to care for her son who was extremely unwell in hospital.

Keep scrolling to learn of this manager's despicable actions and how the employee responded to the situation...

Being the boss of a large team can be challenging...

Managers usually experience hefty workloads and a ton of responsibility.

The most important thing that a manager can show is kindness...

Being kind and understanding is a super important trait when managing a group of people.

But we've all experienced the "manager from hell..."

Everyone, at some point, comes face-to-face with a terrible manager. Whether that's a manager who's a complete jerk or one that's just awful at doing their job properly... it happens.

But it looks like Crystal Fisher had the worst manager of all time...

Crystal lives in Albion with her children, one of whom is her nineteen-year-old son, Jason.

Jason was rushed into the hospital...

Doctors believed that Jason had a form of sepsis that was caused by cellulitis and he was ultimately in a life-threatening condition.

Cellulitis infection can lead to sepsis...

Cellulitis an infection that affects the skin and the tissue underneath it.

The bacteria can enter the skin through an opening, such as cut, scrape, burn, surgical incision, or a bug bite or sting, meaning it can happen to anyone.

As any mom would do, Crystal was in the hospital by Jason's side...

At the time, Crystal worked at PS Food Mart in Michigan and she sent a text message to her manager to explain why she wouldn't be in work that day.

The replies that Crystal received were shocking...

Her manager, who is named Dawn, showed absolutely no empathy towards Crystal's situation...

Crystal's first text message was polite and she said that she would try to get back to work as soon as she could. But Dawn was clearly having none of it, and simply took the text message as notice that Crystal was quitting.

She simply replied with: "If you can't come to work that's you quitting."

Crystal desperately attempted to defend herself...

She explained how, as a mother, she needed to be there for her son in times of need. Dawn excused her actions due to "accommodating schedule changes" in the past and that she didn't want to "tolerate drama."

Crystal strongly stood up for herself...

Dawn, very unprofessionally, repeated herself, saying that it's "too much drama." Crystal explained that her son wasn't simply at the dentist or at a doctor's check-up appointment - his life was on the line. But when she tried to reverse the roles and ask her manager what she would do as a mother...

She said: "I still have bills to pay and something to keep me busy and occupied... your son is in the best place to be, I still have a store to run."

This manager has shown nothing but selfishness and arrogance.

PS Food Mart made a statement after the story went viral...

The Daily Mail reported a statement that was made by the company, which read: "We are investigating the situation and will make sure that it is resolved quickly and thoroughly."

"We have already been in contact with our employee and have communicated our support and assurance that she will be allowed any time off needed."

Crystal needed all of the support that she could get...

"We are sympathetic to anyone, especially our employees that have a loved one in the hospital," the company added.

Dawn was ultimately fired for her actions...

"We investigated and have found that the situation was handled improperly and without the compassion that we value as a company. For that, we are very sorry," the company wrote on their Facebook page in an announcement.

Crystal publically spoke out about her experience...

She appeared on KABC 7 and said: "I pray for you, I pray for you. That’s all I can say," about her former boss.

She received floods of support...

Thousands of people sent their messages of love and support via Facebook and sent well wishes to Jason - who, eventually, and thankfully - made a recovery from his illness.

This story truly goes to show how far kindness can take a person. Crystal's former manager paid the price for her unkind, disrespectful, and ignorant attitude - these are not traits that make a good manager. Up for more stories about well.. weird bosses? Keep reading!