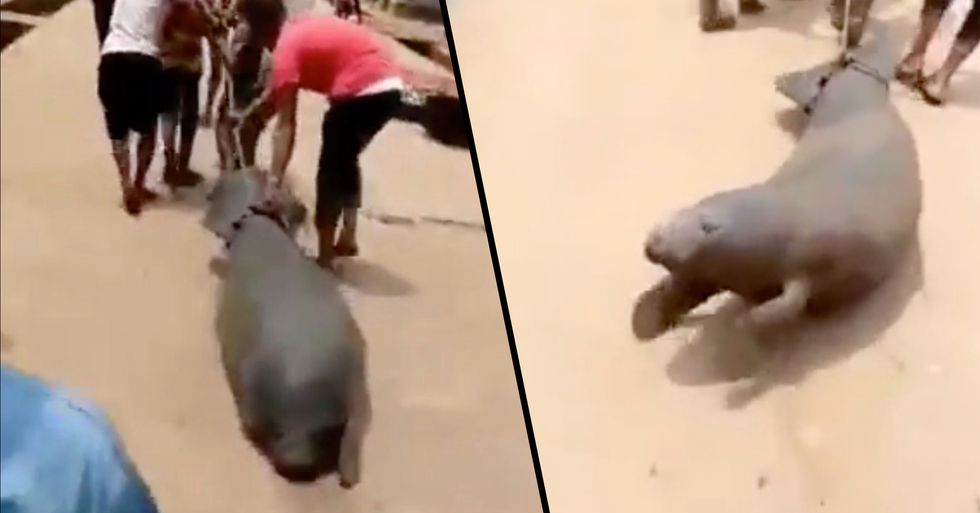 Animal cruelty is unacceptable and there is never an excuse to cause harm to an innocent animal.

But sadly, there are people in our world who find amusement from being cruel to animals and it is truly sickening.

Keep scrolling to learn about the poor manatee who was dragged through the streets in Nigeria...

Disclaimer: This article contains content that some readers may find upsetting.

But when it comes to wild animals...

Finding people who inflict cruelty on animals in the wild is very difficult, and this means that these evil individuals usually get away with their crimes.

Wildlife tourism is a big problem...

Especially in tourist hotspots such as South East Asia where wild animals are exposed to hundreds of thousands of tourists every year.

Tourists aren't the only problem...

Many cultures around the world encourage the hunting and slaughter of animals, and these poor creatures suffer massively at the hands of poachers and amateur hunters.

A shocking video has gone viral on Twitter this week...

And it highlights perfectly the cruelty that is inflicted on wildlife in our world.

The video has come from Nigeria...

And a group of men and children can be seen dragging a helpless manatee by its tail with a rope.

And it is seen flapping its tail and flippers desperately as it is dragged along the harsh terrain - which isn't a manatee's natural habitat, at all. Manatees belong in the water... and not on land.

West African manatees are considered to be a vulnerable species...

Which makes this video even more heartbreaking to watch.

The hunting of manatees is also illegal in Nigeria...

But the animals are still used as a source of meat and oil, so this strongly suggests that the people in the video have captured the poor creature for this purpose.

My attention has been drawn to a very distressing & distasteful video of a captured manatee in the Niger Delta Regi… https://t.co/D0hNlpKiWk
— Sharon Ikeazor (@Sharon Ikeazor)1582452199.0

"My attention has been drawn to a very distressing & distasteful video of a captured manatee in the Niger Delta Region being dragged on bare ground to a cruel fate by some ill-informed/uninformed youth. I strongly condemn this act..." she wrote on Twitter.

An investigation has now been launched to find out who is behind this heartless act...

It is sad that manatees remain one of the most heavily hunted aquatic mammals, the repeated occurrence must be of g… https://t.co/DHqs516RwE
— Sharon Ikeazor (@Sharon Ikeazor)1582452684.0

But the sad reality remains that manatees continue to be one of the most hunted aquatic mammals.

The number of wild manatees is rapidly declining...

And it is because of cruel people such as the ones in the video as to why these beautiful animals are failing to thrive.

You can view the horrific video here...

We sincerely hope that the culprits behind this heartless act are caught soon. Keep scrolling to learn about the neglected dog who was rescued in Hawaii after being buried alive...