Manicurist 'Very Calm' as She's Eaten by an Alligator | 22 Words 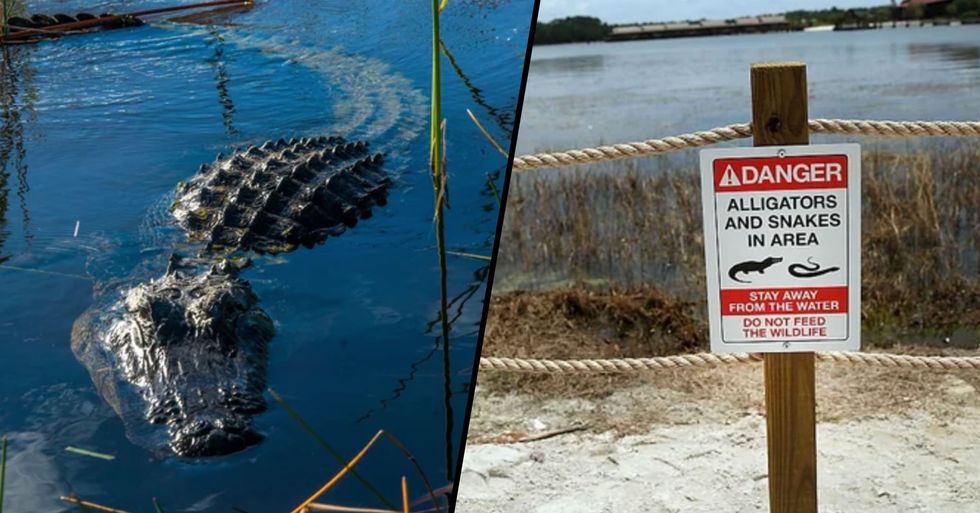 Manicurist 'Very Calm' as She's Eaten by an Alligator

The horrifying news has just come in that a manicurist in South Carolina was killed by an alligator, but it was her behavior over the terrifying ordeal that rang alarm bells...

There's no denying that alligators are one of the most terrifying animals on our planet.

The mere fact that they have been around since dinosaurs roamed the planet is scary enough!

They have been around for a very long time...

It has been predicted by experts that the American alligator is around 150 million years old - meaning they managed to avoid extinction 65 million years ago when their prehistoric contemporaries, the dinosaurs, died off.

These reptiles are certainly not a force to be reckoned with.

Alligators can grow to be around twenty-feet long and can weigh up to 1,000 pounds... and don't even get us started on their diet.

They feed mainly on fish, turtles, snakes, and small mammals...

But more than often, alligators will eat anything they can get their jaws around... including humans.

And here in America...

The rate of fatal alligator attacks on people is steadily on the rise. According to the Tampa Bay Times, scientists have said that gator attacks have been on the rise in Florida in particular.

According to the Florida Fish and Wildlife Commission, there have been twenty-four fatal alligator attacks here in the States since 1973.

People often underestimate the danger of these reptiles...

And one woman in South Carolina recently met her tragic fate thanks to one of these vicious animals.

Cynthia Covert, a fifty-eight-year-old manicurist, was visiting a client last week to do her nails.

Cynthia arrived at her client's home on Kiawah Island, South Carolina, on Friday when disaster struck.

Cynthia spotted an alligator in a pond near her client's house...

After spying the alligator she went down to have a closer look, despite her client and her husband warning her against it.

The couple even told her that an alligator had "grabbed a deer" from that exact same spot just days earlier...

But Cynthia seemed completely unphased, and according to eye witness reports, she replied with, "I don't look like a deer," before trying to touch the gator.

This is when the worst possible thing happened.

The alligator clamped its jaws around Cynthia's leg and slowly began to drag her into the water.

The pair ran to grab a shovel to try fend off the animal...

While one threw a rope to her to try to pull her back onto the bank.

But what the most concerning thing was...

She didn't scream at all.

"Cynthia was about waist-deep in the water and she stated in a very calm voice 'I guess I won't do this again' as they tried to pull her from the water," the Sheriff's report stated.

Something wasn't quite right...

The witnesses told the Charleston County Sheriff that the woman was not acting like her normal self, and was more talkative and relaxed than usual, FOX8 reported.

Investigators asked if her behavior may have been drug or alcohol-related...

To which the witnesses claimed that Cynthia "came to the residence with a glass of wine, but that was the only thing they saw."

Her body was "intact with severe wounds to her leg."

Her cause of death was determined by drowning...

Which is how alligators often kill their prey before eating them.

Messages of condolences have been flooding in for Cynthia and her family...

But many have been left shocked to learn that the alligator was later tracked down and killed by authorities. "It’s awful that she lost her life but, I’m confused as to why they had to kill the alligator," one Facebook user wrote.

Many believed that Cynthia's actions were deliberate.

"Sad! As an adult in SC, you know better than to go near bodies of water! I was taught that as a small child! And you damn sure don’t go near an alligator! She had a death wish," another user wrote.

But whatever the circumstances are...

This is a tragic loss. Rest in peace, Cynthia.