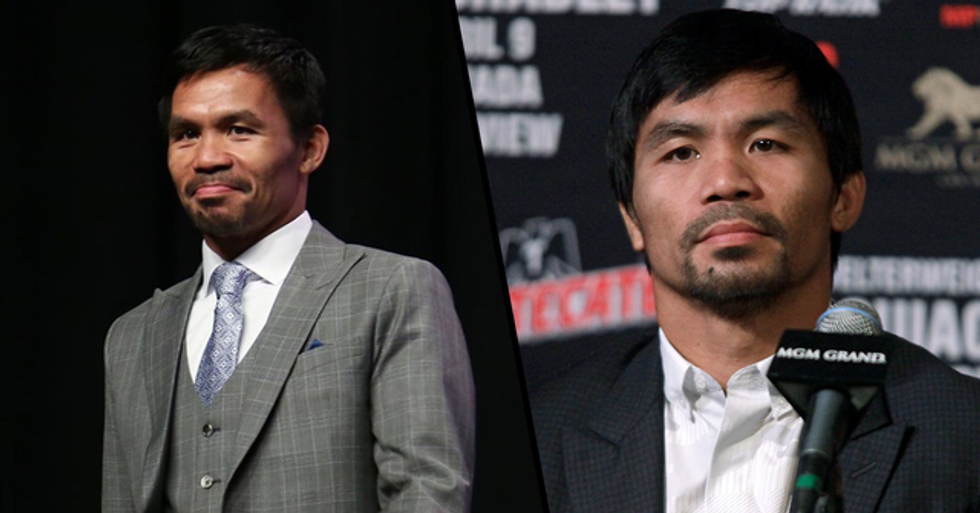 Amongst all of the kind and generous donations by celebrities and public figures amid this coronavirus pandemic, boxing legend-turned politician, Manny Pacquiao, may have just topped them all.

Keep scrolling to hear what he did, and to hear his strong words on the matter...

The world is currently held hostage by COVID-19.

And it is showing no sign of letting go anytime soon.

Over 300,000 people all over the world have now been infected with the virus.

353,608 to be precise. And, devastatingly, a staggering 15,147 more have been reported to have died from the illness.

Since the first COVID-19 patient in Washington, there have been 35,121 more confirmed cases across the country and 458 deaths.

And, earlier this month, President Trump declared a national emergency to combat the coronavirus pandemic, freeing up $50 billion in federal funding and promising a screening website and drive-by tests.

Yet, despite the tireless work from researchers...

And he made a very cool donation of $1 million towards a clinical trial in the hopes of finding a cure for the deadly virus.

And another man has recently come forward to match Clive's donation.

The Atlanta Falcons owner, Arthur Blank, has shown extraordinary generosity by donating a staggering $5.4 million to the cause.

His donation will help primarily Georgia and Montana during the pandemic.

Sharing the news on the Falcons official website, he explained: "As a Family Foundation, we have always believed that it is the power of many that will make the greatest impact on the most pressing issues in our society."

He wants to make a difference in his community.

"This is that moment - to join together to truly harness the power of all of us to address a challenge that knows no boundaries and has no precedent in our lifetimes."

The donation will focus on serving those affected by the pandemic...

Whether it be those infected by the virus or those who have lost jobs as a result. Any remaining funds will be donated to help support Atlanta-area schools, police and food banks, along with funds to help Native Americans and food banks in Montana.

So, as you can see, celebrities have been coming out in full force to help out in any way they can...

And the most recent has been boxing legend, Manny Pacquiao.

The former eight-weight world champion boxer entered the world of politics back in 2010...

And was elected as a senator in the Philippines' House of Representatives in 2016 and is currently serving a 6-year term.

And now, during the pandemic, he is standing valiantly by his people.

Speaking to The Manila Bulletin, he explained: "If you are a leader, you have to be a front-liner," then adding that he's "not afraid to die" to help his people.

He was worried that people may resort to looting and violence in order to survive the medical crisis...

"You have to lead people and let people see that you are with them. I grew up poor. I know what they feel," he explained.

Pacquiao has made several public appearances to reassure fearful residents...

And he donated approximately 600,000 face masks to medics tackling the coronavirus in the Philippines, ABS-CBN reported, and also teamed up with Alibaba billionaire, Jack Ma, to donate 50,000 COVID-19 testing kits.

What an incredible man.

But, sadly, not all celebrities are in the COVID-19 headlines for the best reasons. Keep scrolling to hear about the A-listers who created a video where they recited the lines to John Lennon's "Imagine", and faced some serious backlash as a result...