Man's Hilarious Rant Reveals How a Starbucks Mix-Up Sent Him To the Toilet...11 Times | 22 Words 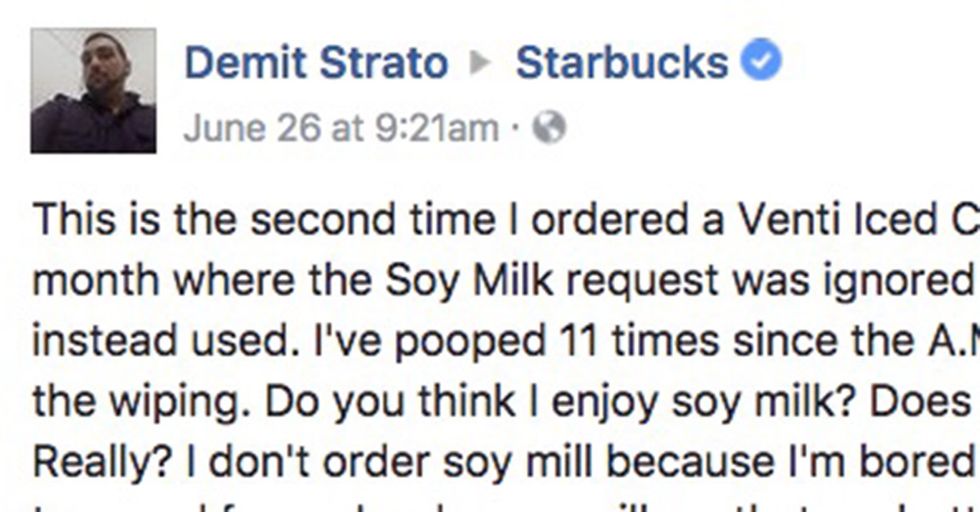 Man's Hilarious Rant Reveals How a Starbucks Mix-Up Sent Him To the Toilet...11 Times

Normally, an order gone wrong just means your sandwich has pickles in it when you hate pickles. You send the food back, eat what you originally ordered, and get on with your life.

Well, that's not always how it goes. Sometimes the repercussions from an order goof-up are a little more serious. Yet somehow more funny at the same time...

Usually, when you get the wrong order, it's just a simple misunderstanding and an easy fix.

Sometimes the server just mishears you. It's pretty easy to see how cheesecake and cheese sticks could get confused, but there are definitely worse things to end up with in life than eight cheesecakes.

Other times, the servers can get a little smart with you.

That looks like the most expensive plate of nothing ever.

And if you've ever worked in food service, you know that sometimes you gotta improvise.

That's kind of brilliant. You can't even be mad at that.

The worst might be when your order is just ever so slightly off.

Looks like you're eating an ostrich or something... Weird. But sometimes, a wrong order can have far worse consequences than you can imagine. And that brings us to the worst of the worst.

A Facebook user by the name of Demit Strato had something go a little bit wrong with his Starbucks order.

You're probably inclined to be a little embarrassed and less upset the first time around, but when it happened twice in a month, frustration will lead you to share the (ugly) details in the name of shaming the company behind the distress.

Okay, nevermind. It's freaking hilarious. We don't want to laugh at another person's misfortune, but Demit at least seems to be having some fun with it himself so it's probably okay to laugh.

People were quick to chime in.

Unlike many ingredient swaps, soy milk is often a preference due to a medical condition or lactose intolerance, not just a desire to be picky.

Still, the circumstances of his distress led many to have some fun with the story.

I'm not sure if this comment advances the conversation, but it sure is funny. That's what you get for sharing a poop story, I guess.

Of course, everyone commenting wished Demit a speedy recovery.

Clearly, his day had hit a terrible speedbump for the second time this month, so it's hard not to feel sorry for the guy. But how did Starbucks respond to the distress they caused Demit?

Well, they gave kind of a cookie-cutter PR response.

'Scuse me, Ryan, but what else do you need to "better understand how this happened"..?

In fact, a random Facebook user (who also works at Starbucks) gave a much better response than the actual PR team.

Hey Starbucks, I found your new PR person right here. Sorry, Ryan, you're out. Willow is in.

Clearly, this happens more than regular milk-drinkers would perhaps realize.

Sometimes it's just a matter of taste, but when you're on the toilet ELEVEN times, I would say that's a pretty big issue.

That doesn't mean there weren't haters being difficult for no good reason.

Come on! How is this HIS fault? Sounds like someone's either trolling or a very, very, very big jerk.

Not everyone is paying attention to the taste of their morning coffee.

For many, it's just fuel to get going, and for others, maybe they CAN'T taste the difference. Especially when they're not looking for it. Here's to hoping that this is the last such incident Demit or any other lactose-intolerant customers have to deal with for a while.