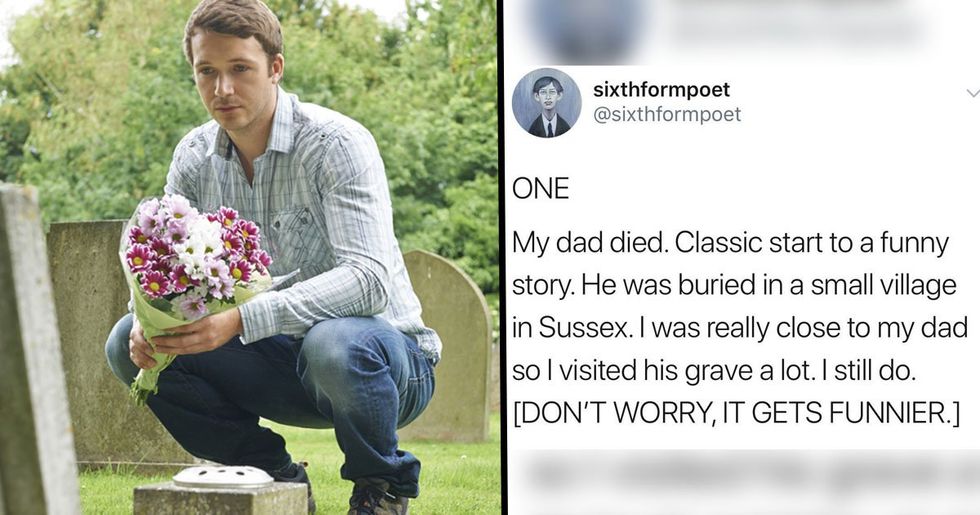 There are many ways you could meet your significant other - perhaps in a bar, on a dating app, or after being introduced by mutual friends... but this man's story about how he met his wife is probably the most bizarre thing that you'll read today.

Not only did this man meet his future wife at a graveyard (not exactly the most sociable of places), but this incredible story also involves a murder along the way...

If the main thing that you're thinking is, how? Like, literally, how?  Well, you're in luck.

Look forward to having all of your burning questions answered as the guy involved in the story has created a Twitter thread detailing every, well... weird twist and turn that led to the most unlikely happy ending, and, you guessed it, it's gone viral.

The thread has been doing its rounds on Twitter, and, let's just say, the internet has gone crazy for the story, and for good reason...

Over the last week, Twitter has been inundated with users telling stories about when they first met their significant others.

From college sweethearts to modern online dating, users were sharing the story of the first time that they laid eyes on their partners.

But none of them were quite as compelling as this particular thread detailing how one man first met his wife.

If you thought that you'd heard the weirdest dating story yet, just wait until you read this one.

We were teased into the story perfectly with a tweet telling us that "a ridiculous but entirely true story" was to follow. Imagine this being the first thing that you read while partaking in your daily morning scroll on Twitter...

ONE My dad died. Classic start to a funny story. He was buried in a small village in Sussex. I was really close to… https://t.co/PsPpniauap
— sixthformpoet (@sixthformpoet)1560073950.0

It was a pretty bleak start to the story as Twitter-user, Matt (who also goes by the mysterious name "sixth form poet"), tells us that his dad had died. Not exactly the most conventional start to a funny thread.

But we were reassured that the story would get funnier...

After much questioning as to how the heck the story would end up being comical, much to everyone's relief, at the end of his first tweet, Matt informed us that the story would get funnier. Phew. So grab the popcorn, we're in for a long ride...

The guy was very dedicated to keeping his dad's grave pristine.

There were so many flowers at his father's plot that it "frequently resembled a solid third place at the Chelsea Flower Show," he joked.

After noticing the lack of flowers left for the guy next to his dad, Matt took drastic action...

We're sure that any decent person would do the same, right?

People started to say that they'd done the same thing.

The Twitter community obviously found the gesture both relatable and touching. Oh, what a treat they were in for.

I did this for quite some time, but I never mentioned it to anyone. It was a little private joke with myself, I was… https://t.co/Mv1qg8mON1
— sixthformpoet (@sixthformpoet)1560073952.0

Just a good guy trying to do a good deed for someone else. What could possibly go wrong?

After googling the name of the stranger that he'd been leaving flowers for, Matt made a shocking discovery...

I wondered if there was a hidden connection between us, something secretly drawing me to him. Maybe we went to the… https://t.co/hhgVfOLtMQ
— sixthformpoet (@sixthformpoet)1560073952.0

It took two and a half years of leaving flowers for this stranger for the man to finally make that quick google search, and the results led to the ultimate twist in the tale.

We were on the edge of our seats waiting to hear who the stranger could possibly be. Was he a long lost relative, a distant friend or perhaps just a random guy? We needed to know.

His wife didn’t leave him flowers BECAUSE HE’D MURDERED HER. ON CHRISTMAS DAY. After he murdered his wife, he murde… https://t.co/Pzi3s5B8XJ
— sixthformpoet (@sixthformpoet)1560073953.0

We were thinking of many possibilities, but we weren't thinking of this possibility. But don't worry - that's not the end of the story, there are even more twists and turns coming up...

The reactions started pouring in.

The internet was well and truly hooked.

It's safe to say that people weren't expecting the story to take that turn.

Matt couldn't believe that he had been leaving flowers for a murderer, but there's still more to come...

Matt was quick to emphasize just how long he had been leaving flowers at the murderers grave for. It certainly was a dark turn of events... but you can't help but laugh at this man's misfortune.

After feeling sorry for the murderer's wife and her family, he planned a way to make an apology.

I felt terrible for his wife and her parents. Now, I wasn’t going to leave them flowers every couple of weeks for t… https://t.co/xxF4VORMdV
— sixthformpoet (@sixthformpoet)1560073953.0

Matt found himself in the middle of an impossible situation after simply wanting to do a nice thing for a lonely stranger. Talk about digging yourself a hole.

The tale was becoming quite the emotional roller coaster.

As the plot thickened, the thread was brimming with gobsmacked responses citing the constant twists and turns.

People also started seeing the funny side of the tale.

Others saw the opportunity to make a pun and went with it.

This response was genius.

But, what we were all desperate to find out was how any kind of romance came about from this.

Our detective hats were on and there was still no sign of potential romance. But that was all about to change. Trust us, just keep reading...

For the next installment of the saga, Matt revealed that he then had a rather awkward encounter with a member of the victim's family.

I found out where they were buried, bought flowers and drove to the cemetery. As I was standing at their graves mum… https://t.co/gaOnGtFMq4
— sixthformpoet (@sixthformpoet)1560073954.0

Matt opted for flowers (again), laying them on the victims' graves as a way of apologizing for dedicating over two years of his life tending to thier murderer's grave. All was running smoothly until the niece/granddaughter of the victims appeared behind him and, quite understandably, started to ask questions.

We were left stunned when Matt said this...

I explained and she said ok that’s weird but quite sweet. I said thanks, yes it is a bit weird and oh god I ASKED H… https://t.co/QKM9bpntFy
— sixthformpoet (@sixthformpoet)1560073954.0

In a dramatic finale to the tale, we finally got to know how he actually met his wife. Not your typical love story, is it?

After reaching the end of the story, Twitter plummeted into turmoil.

The story may have reached a dramatic close, but the reactions will make your day.

Before you click off, you have to read the reactions to the thread...

The thread was flooded with hilarious responses.

Imagine having to tell your kids how you met their mother if this was how you first encountered each other.

People thought that the guy's story was comedy gold.

This reaction was a favorite.

Some even said that the story should be made into a film.

People were urging streaming giant, Netflix, to adapt the thread into a movie.

Others even had a title for the movie thought out.

Netflix wouldn't have to worry about naming the blockbuster, as this Twitter user had it covered.

And the memes just kept rolling in.

It would certainly be an unusual ending to the sitcom.

So, forget Tinder, get yourself down to your local graveyard.

It may not be the first location that springs to mind, but if Matt's story is anything to go by, you might just find your future life partner there.