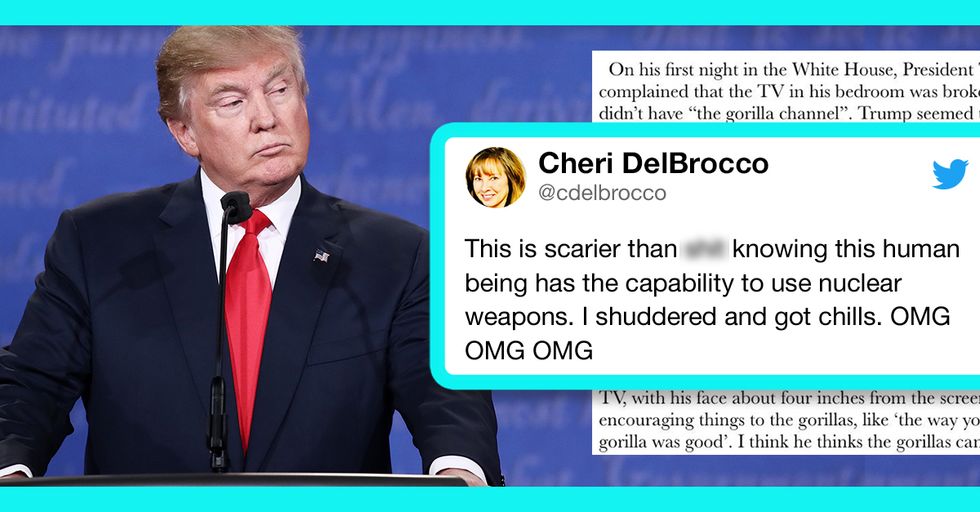 It's all over the news today: There's a new tell-all about Donald Trump, and people can't wait to get their hands on it to read just how unhinged the man who currently has access to the nuclear codes actually is. The book was so hotly anticipated, in fact, that it was released a full four days before it was originally scheduled to be available. When it comes to Donald Trump, people want to know every single sordid, unsavory, and unsanitary detail.

Excerpts from the book have already been making headlines — such as the fact that Trump apparently eats from McDonald's because he's afraid of being poisoned. (Yes, that's real.) But one story in particular — involving a bunch of gorillas — has also been making the rounds. There's just one thing you should know about the gorilla story, though. It's completely made up.

Fire and Fury: Inside the Trump White House has already sold out at a bunch of bookstores.

The controversial book by journalist Mike Wolff contains shocking descriptions of what life inside the White House under the current administration is actually like. Any chance of this book flying under the radar was completely smashed to smithereens by the fact that Trump's lawyer issued a cease and desist letter to Wolff and threatened him with a libel suit before the book was released to the public. Obviously, Trump doesn't want people reading this book. (That being said, you can buy it here. I got the Kindle version.)

There are many excerpts from the book floating around on the Internet, but one that's getting the most attention is this one which was posted by Twitter user @pixelatedboat. It tells the story of the president's unquenchable appetite for footage of fighting gorillas:

According to the excerpt, Trump was under the impression that there'd be a TV in the White House that screened gorilla-based content 24 hours a day. His staff then created a gorilla channel for him... which he hated, because it didn't show enough fighting. The excerpt states that Trump would kneel in front of the TV and talk to the gorillas on the screen. The entire thing is completely bananas.

As soon as @pixelatedboat shared the post, it was swarmed by people who were appalled at this newest revelation about Trump's behavior.

People such as Cheri DelBrocco, whose response is pictured above. At this point, I'd just like to point out that Ms. DelBrocco's Twitter bio currently reads, "Common sense has become so rare that it should be considered a superpower." That's going to become ultra relevant in 3...2...1...

Look, people. The gorilla network excerpt is a complete joke.

A parody. A lampoon! A story that is not true. It's a joke. You get it, right? Trump does a lot of incredibly bonkers things. So many. Almost too many to count. Things like golfing when he should be working and claiming to have won the (non-existent) war on Christmas. But he doesn't watch gorillas on TV for 17 hours a day. (THAT WE KNOW OF.)

Poe's Law is an adage that applies to the Internet. It states that without a clear indicator of the author's intent, it is impossible to create a parody of something extreme enough that it won't be mistaken as truth by some readers. It's like when you're texting someone and trying to be sarcastic, but it doesn't come through as sarcasm and instead you just kind of look like an a**hole. It's why the winky-face emoji was invented. Anyway, because @pixelatedboat didn't explicitly state, "Hey everybody, here's a joke I wrote!", some people took his excerpt as fact. Quite a few people. Not everyone was quite as gullible as Cheri DelBrocco, but a bunch of people commented on just how believable the excerpt was...

Did you realize the post was a joke right away, or did it take you awhile?

That's the thing about the excerpt. Because we're already familiar with how unhinged Donald Trump has been on some occasions, the gorilla TV story reads like something that actually could have happened — up to a point, of course.

Trump saying he wanted to watch "the gorilla channel"? Yeah. That is 100 percent something that could have happened in real life.

@pixelatedboat @brundlefly The fucking insane thing about this is that you really didn't fly too close to the sun u… https://t.co/Gq9opllBNF
— Scott Wampler™ (@Scott Wampler™)1515119528.0

"He probably just wants to watch Planet Earth," people might think at that point. The fact that his staff bent over backward to make "the gorilla channel" a thing? Yeah. We already know that they're forced to do a bunch of bending over backward in order to keep him happy. As this Twitter user points out, it's not until the third paragraph that things really start to cross over into unbelievable territory. Trump couldn't possibly watch 17 hours of gorillas each day. When would he watch his beloved Fox News?

This Twitter user took slightly longer to realize the excerpt was a joke.

@pixelatedboat I read it three times before I realized it was a joke. It was completely believable until the part a… https://t.co/7CPsOjYX8Z
— Terry Dresbach (@Terry Dresbach)1515123221.0

And honestly, that says more about Donald Trump than it does about anyone reading the gorilla TV story. The very fact that some people fell for the fake excerpt shows that most of us have already sort of just accepted that things are crazy and nothing makes sense anymore.

Thankfully, this gorilla story is not true. I mean, the rest of the bonkers Trump stories are true, but doesn't it feel good to know that at least one of them is completely made-up?

For once, there's a story coming out of the White House that doesn't make us shake our heads and fear for society. And that's a pretty good feeling.