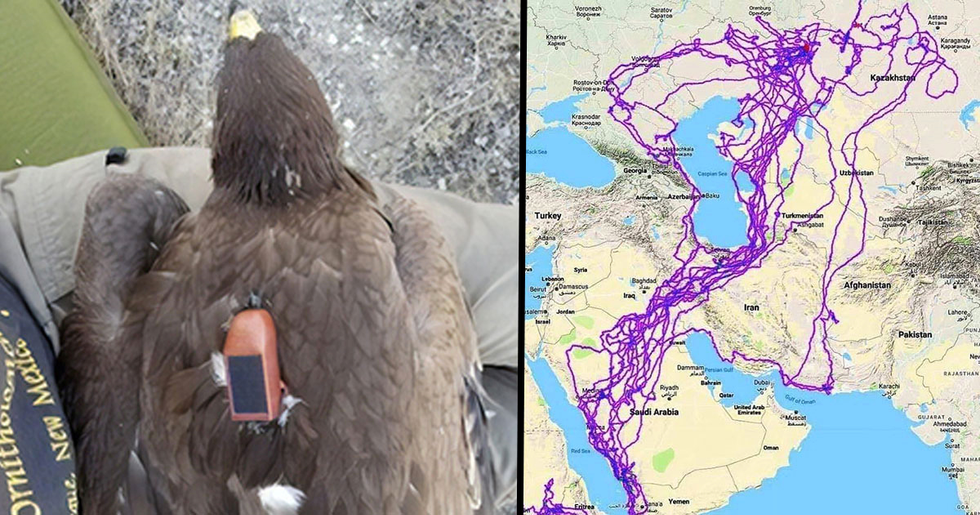 Did you know that a steppe eagle can travel up to 2,200 miles in a single day? So we wonder how far and where they would go if we could track them for an entire year?

Well, thanks to a young man called Fahd Qash from Saudi Arabia, we can now see where 20 steppe eagles went for an entire year of their lives.

Fahd was walking in the swamp when he found a dead eagle on the ground with a tracking device around its neck.

It turns out that a group of scientists were tracking these eagles and now we can see exactly where they went.

Magnificent to look at but also to study due to their intelligence and their exciting lives that can last up to 30 years in the wild.

The steppe eagle in particular is a very handsome bird.

It is a very imposing creature and boasts spectacularly broad and long wings. They are about 24-32 inches in length and weigh between two and five kilos depending on the whether they are male of female. Interesting fact: The female is heavier than the male.

But they will kill rodents and other small mammals if necessary. They can also store their food in their throats for several hours before it is moved to their stomachs for digestion.

As their name would suggest, you can find them in steppes, deserts, grasslands and sometimes even in agricultural areas. The call of the steppe eagle is a crow-like bark.

The steppe eagle breeds from Romania east through to south Russia and Central Asia to Mongolia.

They typically lay one to three eggs in a stick nest in a tree.

They tend to spend the winter in eastern and southern Africa although some also go to the Arabian Peninsula during the colder months.

They are known for travelling very long distances.

A single eagle can fly up to 2,220 miles in one day. Boy must their wings get tired.

But wouldn't it be amazing to see exactly where they go?

Like mile for mile. Even better if we could see what they saw too, but that might be just a pipedream.

Well, thanks to Fahd Qash, and a bunch of scientists, we now can.

Fahd Qash from Jizan, Saudi Arabia found something unexpected. What he found was a dead eagle with a tracking devic… https://t.co/0CdjGg5FhX
— ZoologiMY (@ZoologiMY)1551489939.0

Fahd Qash from the Jizan region in Saudi Arabia was minding his own business and enjoying a quiet stroll when he came across something out of the ordinary.

A dead eagle that appeared to have a tracking device fixed around its neck.

And when Fahd looked closer at the device, he realised that it had the owner's contact details on it.

The device had been fitted in Kazakhstan in 2018.

A group of scientists had decided to run an experiment where they tracked the movements of 20 eagles for a whole year.

The eagle has been identified as a steppe eagle.

Based on the picture, some researcher said it might be the Steppe eagle. The steppe eagle breeds from Romania east… https://t.co/vRVzlHjx52
— ZoologiMY (@ZoologiMY)1551490500.0

This type of eagle is identifiable by its oval nose and its gape which extends beyond the centre of its eyes.

Sadly the fact that it was dead meant it could not be brought in for questioning.

Just imagine all that it could tell us about its life and the places it had visited. We feel adventurous heading to the Costa Del Sol every summer. #ShelteredLife

But thanks to the GPS, they were able to create this map to show exactly where they went.

And boy did they get about. They flew across several countries in the Middle East but there are certain areas that they didn't seem to keen on crossing.

People are just baffled as to why it avoided the Caspian and Red Sea.

The eagle has crossed many countries in the Middle East and, it is not sure why, has avoided the Caspian as well as… https://t.co/D1CKergLop
— ZoologiMY (@ZoologiMY)1551490280.0

Perhaps it can't swim? Although we are sure there must be a more plausible explanation than this. Wildlife experts can you help us?

Thankfully, many offered up other reasons as to why it stayed clear of water.

Maybe this eagle became parted from his flock and became disorientated and got lost? Shame it couldn't work the GPS attached to its neck!

Or did it just stick to areas that were ideal for hunting?

Apparently the steppe eagle does not hunt like a pelican or a seagull. Who knew? So fish are off the menu for them. Hence avoiding the sea.

No shortcuts for these birds.

A steppe eagle will not mind travelling a longer distance to ensure that they fly across good ground for hunting. This is why their route often goes around the coast rather than straight across a country.

Apparently water is not helpful for high flying.

@ZoologiMY From what I know learning from watching raptors years ago, birds need hot air to rise. They climb up by… https://t.co/XdlAKpoKSn
— Hafiz Noor Shams (@Hafiz Noor Shams)1551625283.0

It is easier for an eagle to fly over land than it is for them to fly over water. If we were flying across so many countries in only one year, we know we would want to take the route that used the least amount of energy.

Or to be all technical about it.

Steppe eagles are thermic wind flyers apparently? Which basically means they need warm air to fly at their best so land is preferable to water.

Can you even imagine this menacing looking bird of prey with a little spacesuit and helmet. LMAO.

Shall we send one up to see?

Maybe not. Might have the RSPCA on our backs. Or a particularly mad eagle pecking at our face. Ouch.

And what if he needed a little sit down.

The Red Sea is an estimated 2250km long and 355km wide at its widest point so what if Mr. Eagle wanted to rest his weary wings? Not to mention the extra energy needed to fly against the sea winds.

He would definitely need it after flying over 16 different countries.

Most people don't visit 16 countries in a lifetime, let alone in a single year. We are exhausted just writing about it.

No need to get technical for this tweeter.

Food and shelter. Simples. The main things needed for survival.

The British Birds reasearch team have tracked this type of eagle before.

The British Birds team have tracked 16 Steppe eagles before & they found out that the longest daily flight distanc… https://t.co/c03rqfLiUn
— ZoologiMY (@ZoologiMY)1551491759.0

They previously tracked 16 steppe eagles and the results were fascinating and gave a real insight into how far these creatures travel in their lifetimes.

They also recorded a whole life cycle of this eagle.

We are happy to see that they have their priorities right and spent the largest percentage of their time in the breeding area. You naughty eagles you!

And this isn't the only species of bird that is being tracked.

There is currently a GPS tracking study taking place on the Blackpoll Warbler bird. These songbirds can travel up to 2,5000 km non-stop.

Pandas have also been fitted with GPS trackers.

And this team are even using GPS collars on elephants.

These huge animals are just incredible to watch, even when they are just cooling themselves in the water. Although their migration patters are also being tracked which can help researchers locate and get rid of poachers.