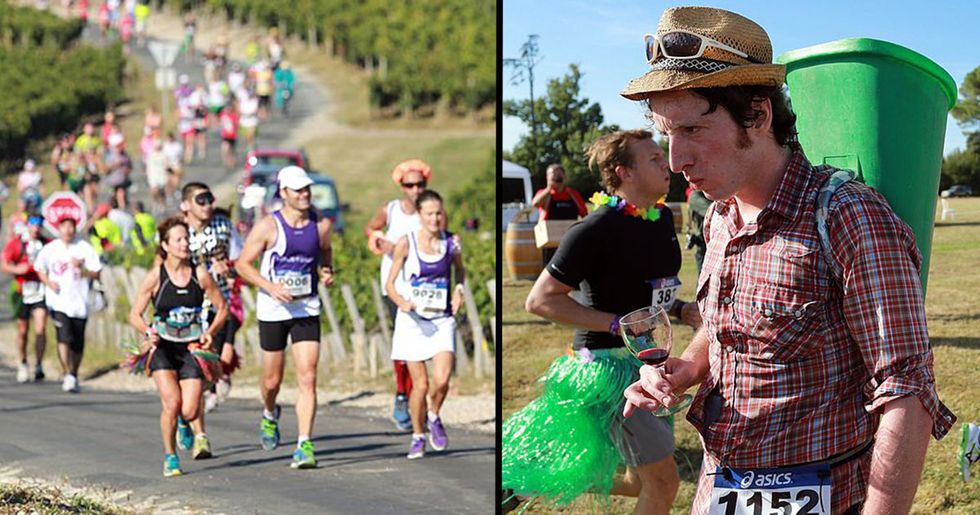 Marathon Where You Can Eat Cheese and Drink Wine Is Back

Marathons are a great way to stay in shape, enjoy the outdoors and even raise money for a charitable cause. But it’s safe to say that running for endless hours doesn’t always appeal to everyone. Sometimes a human being just can’t be bothered to spend their life training hard and eating healthily only leading up to a one day event. I think a majority of the population would rather just stay in, watch some reality TV and enjoy a glass of wine and some cheese. But, what if there was a marathon that combined the running with a love for dairy and alcohol? Well, it turns out that such a marathon exists and we’re all incredibly interested.

It takes place in France, the land of wine and cheese - literally the best place for such a thing to exist.

The race takes you across the French landscape.

And along the way you’ll be able to enjoy the beautiful scenery, the chateaux and even a few castles.

But you won’t find water on the refreshment table.

As well as a whole range of gourmet food.

Along with your wine, you can sample local ice cream, grapes and even shellfish!

And of course, there’s cheese!

Which you also get to sample during the run! I think I would do more than just sample though!

And you have to do it in fancy dress!

Yep! Not only do you get to gorge on cheese, oysters and wine. But you also get to do it dressed as your favourite Disney character, Tin-Tin or a DC superhero.

But there’s a time limit.

Participants of the marathon are given six and a half hours to complete the course. Giving first-time runners plenty of time to enjoy the experience.

Of course it’s not all about the food.

While taking part in the marathon, you are welcome to enjoy the wine but you're also expected to drink responsibly.

And there’s so much more to enjoy!

Not only is there food and drink, but you also get to experience historical landmarks, the beautiful countryside and even live music.

And I bet you can guess what the winner gets!

And they get a lot of it.

The winners in both the male and female categories are rewarded with their weight in Medoc.

But even the runners-up get something.

The top 3 in each category also win a box of fine wine.

And you can win a prize for your costume!

So make sure to dust off your nurse outfit, because you could win best dressed.

The registration for the 2019 race has already opened up! You can find more information on the Marathon du Medoc website.

I’m sure I’ll see many of you there!

Now, all I need is my passport…