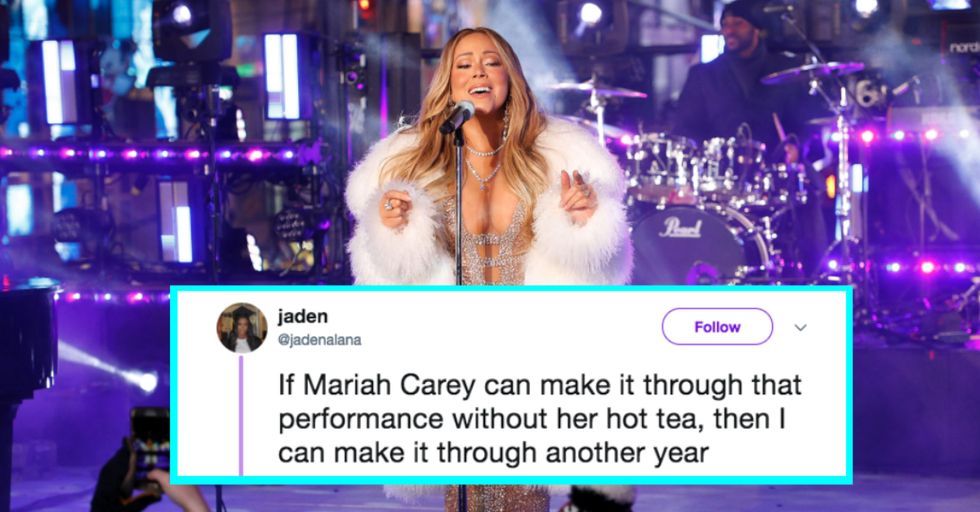 Even though 2017 was by all accounts a giant Dumpster fire, it wasn't hot enough to make it any less freezing on New Year's Eve, especially in Times Square. With temperatures hovering around 10 degrees Fahrenheit, we rang in 2018 while our brains froze over and our teeth chattered. And no one, not even our beloved performers and TV personalities, was immune from the cold.

Mariah Carey was back in the saddle for New Year's Eve this year. She performed live in Times Square, and for the second year in a row, things just didn't quite go according to plan. It wasn't the debacle that was her 2016 performance, but it was no walk in the park, either.

If you'll recall, Mariah Carey's performance for the 2016 New Year's Rockin' Eve show was sort of kind of a disaster.

She claimed that she couldn't hear through her earpiece, and her backing track went on without her in what turned out to be one of the most cringe-worthy performances of the year.

It was tough to watch.

Everyone sort of thought that although the performance was pretty much on par with everything else that happened in 2016, that might be the end of Mariah Carey.

But it most certainly was not, thank you very much!

Mariah Carey, diva extraordinaire, was not going down without a fight, and so she returned to that New Year's Eve stage once again for the 2017 broadcast. Some said she was brave to do so, others thought she was being reckless.

But thanks to what we're sure were endless stringent rehearsals, Mariah Carey's performance this past year went off without a hitch...almost. At one point during the show, Mariah took a moment to reach for a cup of hot tea — understandable considering it was super cold and she's a superstar who always gets what she wants.

But the tea...it wasn't where it was supposed to be. "Happy New Year!" Mariah exclaimed to the cheering crowd. "I'm just going to take a sip of tea if they let me. They told me there would be tea," she continued as she futilely searched around her immediate area for a mug. "Oh, it's a disaster!" she bemoaned. "OK, well we'll just have to rough it. I'm going to be just like everybody else with NO HOT TEA!" The emphasis was hers.

And with that, the Internet exploded.

For many, Mariah Carey's demand for hot tea was exactly how they'd hope the year would start. Some who may not have had hope for 2018 when the night began were suddenly renewed and joyous as the potential this new year now held. Others speculated as to who...or what...could have taken Mariah Carey's tea...

Smug Kermit is smug because that tea wasn't even his to begin with! It's Mariah Carey's tea!

There's a perfect GIF for every situation, and this person found it:

Of course, there is the possibility that the world isn't as sinister as we think and that, in fact, no one actually stole Mariah Carey's tea. There's a pretty good chance that they discussed the tea before the performance and someone was like, "Hey, maybe it's not such a good idea to have a cup of steaming hot liquid by your feet while you're performing on live television," and Mariah Carey heard, "We bow to your commands, high priestess."

Nevertheless, we can be pretty sure that the second Mariah Carey started complaining about hot having her tea, her assistants backstage looked sort of like this:

Mariah Carey has been slighted by the universe twice in a row now – it's a wonder she has the strength and the will to go on. But she is a warrior and we have faith that even though she didn't get her hot tea and several assistants probably lost their jobs over it, she will persevere.

And you know what, everybody? While most people had just screamed, "Happy New Year!" and were snogging their loved ones, Mariah Carey was taking sweet, delicious sips from that cup of tea. And she was happy.

The moral of this story is clear:

Though Mariah Carey was temporarily majorly inconvenienced, she pushed through and gave the performance of a lifetime. And that means that you too can get through 2018. Cheers.