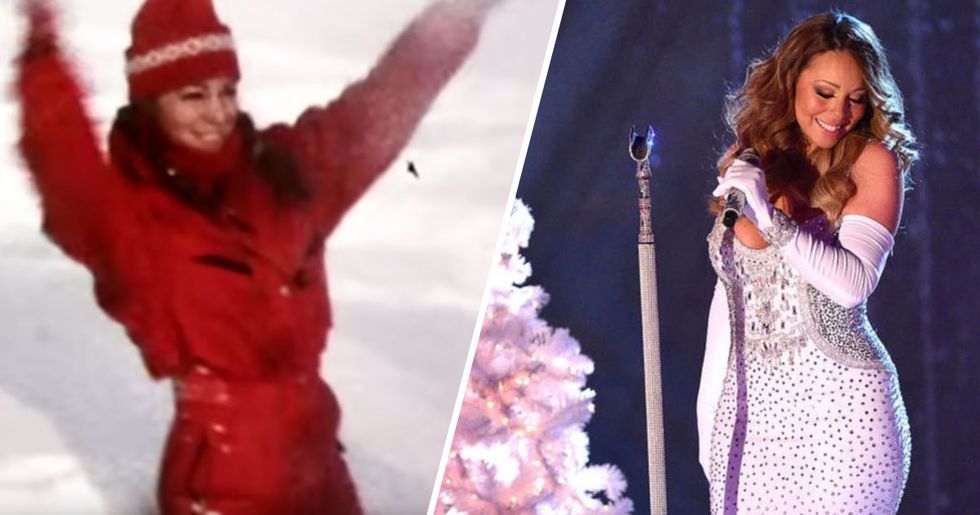 It's happened to all of us.

We're sat in a bar at Christmas time with friends, enjoying a festive drink. The evening is pleasant, and everyone's enjoying themselves. Until... The sickeningly familiar sleighbells come on over the Jukebox. Our hearts sink immediately because we know what's coming... Mariah Carey's "All I Want For Christmas Is You" is about to commence, and therefore completely ruin everyone's evening.

Despite how successful Mariah's 1994 Christmas hit is, it is also known universally as being incredibly annoying. Once you've heard it, that's it - It will be stuck in your head for the next week, and there's nothing you can do about it.

So it will come as no real shock that Mariah's festive jingle has been voted as the most annoying Christmas song of all time. The survey, commissioned by Huawei, asked the public to rank ten Christmas singles purely on their annoyingness... And, though we expected Mariah to win the number one spot, the rest of the results may shock you.

Scroll on to see which songs were voted as the most annoying, by the British public...

It's the most wonderful time of the year... Well, it is if you like Christmas music.

While some people love nothing more than listening to endless Christmas songs over the festive period, others would rather rip their own hair out than listen to "Jingle Bells" one more time.

'Tis the season of Christmas songs...

And we couldn't be dreading it more.

There are so many of us who cannot stand those pesky Christmas jingles...

Because who wants to hear "Driving Home for Christmas" again for the 230th time this week?

There's actually a scientific explanation behind the irrational hatred that some of us experience at this time of the year.

Psychologists have revealed some interesting findings regarding Yuletide music...

Psychologists have found that playing Christmas music too early in the year can wreak havoc on a person's mental health, particularly if they’re constantly exposed to it at work.

It's undeniable that Christmas songs are ridiculously overplayed...

“If you don’t want to hear a song, or are hearing it on repeat for hours, your prefrontal cortex is working hard to filter it out so you can focus," Dr. Rhonda Freeman, a clinical neuropsychologist said on the matter. So it makes total sense that anybody forced to hear a song they’re not a fan of, on repeat, would eventually start to suffer.

Okay, so now we've clarified that Christmas music is in fact, annoying...

The big question remains... Which one is the most annoying?

It's a tricky one to answer...

Because there are just so many, and we hate pretty much all of them.

But now, an official poll has been put together...

And it provides a definitive list of which Christmas songs are the most annoying.

A survey asked the British public on their thoughts on Christmas music.

It sounds like a recipe for disaster, doesn't it? The survey, commissioned by Huawei, asked Brits to vote on what they considered to be the most annoying Xmas single.

"Santa Baby" by Eartha Kitt and "Jingle Bells" by the Andrews Sisters brought up the rear in tenth and ninth place, while other singles such as "Fairytale of New York" by The Pogues and Kirsty MacColl, and the slightly problematic track, "Baby It's Cold Outside" by Tom Jones & Cerys Matthews also made the list.

But which ones came out on top?

"I Wish It Could Be Christmas Everyday" by Wizzard came in as the third most annoying Christmas track and, quite surprisingly, the charity track, "Do They Know It's Christmas?" by Band Aid weighed in as the second most annoying.

As for the number one most annoying Christmas song on the list?

Mariah Carey's "All I Want for Christmas Is You", of course.

The Christmas jingle, which turns twenty-five-years-old this year, is one of the most successful festive singles of all time and has earned the singer over $60 million dollars since it's release.

Yet, despite its success...

We have been forever divided as to whether we like the song or not.

It's a historic debate.

It's like gun control - You either love it or you hate it.

But now, it's official.

The British public has spoken out and has thus decided that Mariah's jingle deserves the number one spot on the "most annoying Christmas song" list.

Because, despite the Brits hating her song, it hasn't stopped her never-ending waves of success from the jingle.

The song repeatedly re-enters the charts every year...

And last year on Christmas Eve alone, the track was played 11 million times.

Because the song has already been streamed 4.8 million times just over the last week. It looks like we're in for a Mariah-packed Christmas, folks...