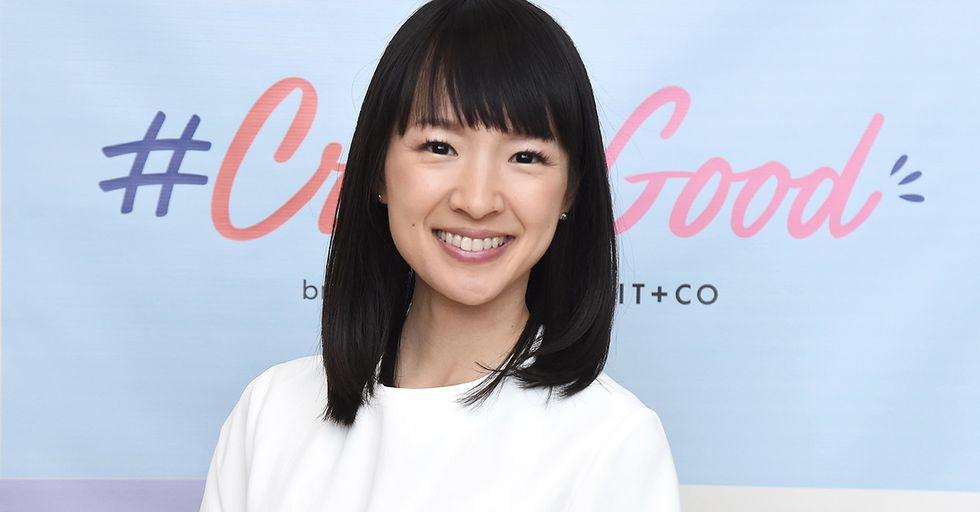 Japanese organization consultant Marie Kondo is taking the Internet by storm! It's a new year, and people are in the mood to make some major changes in life. So, Kondo's new Netflix series couldn't have come at a better time. Viewers are soaking up her lifestyle advice – and posting some pretty great reactions to it on social media!

Tidying Up With Marie Kondo is all about de-cluttering your life. After watching it, therefore, fans of the show took to Twitter and showed off their own major transformations. Or rather, they just shared their own hilarious observations on the KonMari phenomenon. See what people are saying about this popular new Netflix show!

Marie Kondo is a bestselling author and now Netflix star.

She's the author of The Life-Changing Magic of Tidying Up, and her eight-episode Netflix series deals with insanely messy living spaces.

Marie's message is striking a chord with audiences.

Her KonMari method is clearly catching on in America!

Just look at the results!

Looks like her organizational tips are pretty effective, huh?

Kondo is teaching people to say "thank u, next."

It's really interesting! Her process involves looking at an object you don't use as a lesson for the future.

Kondo has an adorably positive energy when stepping into a mess.

If only we could all get that excited during spring cleaning!

PLEASE DO THIS, NETFLIX. They'd be the ultimate life-fixing team.

Really though, how wholesome does this show look?!

Is this the new ASMR?

Instead of finding sounds to relax you, it's just the joy of watching a stressful mess dissolve into order.

Time to reevaluate all those things you don't use!

People are using momentum from the show to get their own messes in order, too.

Basically, Netflix knows how (and when) to grab an audience.

Self-improvement is already the big resolution that everyone is making in 2019, one way or the other.

Kondo is drawing viewers to her.

She does seem to have a very open and soothing energy to her! No wonder people find it relaxing to watch.

And don't underestimate Marie Kondo! We've yet to see a mess she can't tackle.

Just look at that tidiness.

The KonMari method is leading a New Years' revolution!

And don't interfere with another person's motivation!

I watched 2 episodes of Marie Kondo’s Tidying Up on Netflix today. I then cleaned out & organized my pantry, six ki… https://t.co/ChKyWDEM8Z
— Esmeralda Bermudez (@Esmeralda Bermudez)1546408094.0

Because that seems like a perilous thing to do.

Kondo's method also makes a point of gathering up things to donate.

And it looks like various charities will be getting lots of donated goods this year!

Heck, people are even learning to use proper storage spaces.

Honestly, who hasn't been guilty of getting a little lazy and just letting your laundry hamper double as a wardrobe when it's full of clean clothes?

Marie Kondo is all about 'sparking joy.'

And it looks like she's succeeding in a big way!

One episode is all it takes.

So if you're looking for some motivation, check out the show. Apparently it'll give you some intense organizational energy!

Some couldn't help but make a comparison.

Tidying up with Marie Kondo, but instead it’s my mom throwing away things she’s deemed unnecessary with zero input allowed from the couples
— Dami Lee (@Dami Lee)1546494972.0

Yeah, most of us have had that moment where our mom just started purging the things she didn't want around anymore (and not consulting us at all!)

Just seeing all these happy people gives off a spark of joy by itself.

And people are also finding some humor from the show.

Now THIS is super relatable. But hey, with Kondo's show, maybe we'll figure out how to lighten some of that baggage!

Apparently, some people were getting a little defensive about their mess.

people on twitter r acting like Marie Kondo is about to hoof down their front door and throw away their favourite j… https://t.co/uMqZhALAOW
— Beth McColl (@Beth McColl)1546710817.0

To each their own, right? Some just get more out of instructional organization shows than others.

Specifically, there's a debate around getting rid of books.

Some people want their books, regardless of any joyous spark.

english major twitter when marie kondo suggests they should donate the books they haven’t touched in 20 years https://t.co/Z239OZMTu8
— cumdrop (@cumdrop)1546704011.0

And that's fine. No need to yell!

One person thinks that the spark of joy rule should apply to more than books and clothes.

Funny, yet actually pretty deep when you think about it.

Some messes are digital.

And it'd be great if Marie Kondo could figure out a way to quickly organize that, too!

Let's all try and think on those terms a bit more, then.

Boxes are your friend.

I hope to one day love someone as much as Japanese organization expert Marie Kondo loves boxes. https://t.co/sFeeCmql8N
— DJ Judd (@DJ Judd)1546467310.0

Organization is just some crafty folding and a few boxes away!

If only this were possible.

Imagine, just obliterating the parts of social media that take away from your joy, and keeping the parts that do.

So take a leaf or five out of Marie Kondo's book.

And maybe save the pet eels for another day! Are you a fan of the KonMari method? Or maybe just in a mood to get some cleaning done? Share this story with your friends and spread the good vibes!