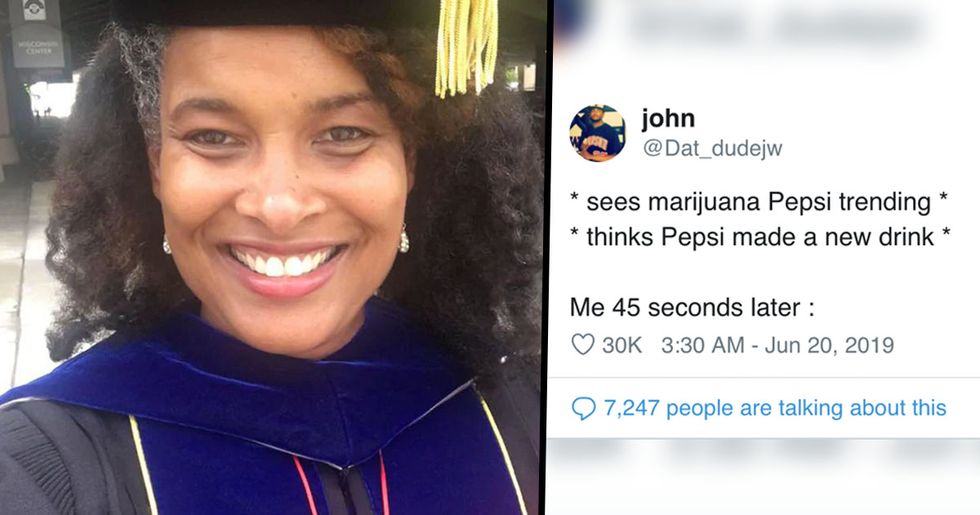 In case you were confused by the hashtag #marijiunapepsi that was trending this week, it was not, in any way, shape, or form in response to PepsiCo bringing out a cannabis brew cola.

Pepsi has no plans (to our knowledge) to infuse weed and cola together. "So what's going on then?," I hear all of you raging stoners grumble as you pause from thumbing your Nintendo Switch.

Well, actually, Marijuana Pepsi is the birth-given name of a realtor from Wisconsin.

I think that she's probably one of the only people in the world that could get away with saying "yes" to "has it got your name on it?" - obviously only in reference to bottles of Pepsi or bags of labeled weed, but...

The thing is, she doesn't drink Pepsi or get high.

Poor clean-living Marijuana Pepsi has probably spent her entire life being asked whether she likes weed and soda.

Why was she called Marijuana Pepsi?

In a similar vein to the classic Johnny Cash song, "A Boy Called Sue," MP was given her unusual name to make her grow up tough. According to Marijuana Pepsi, her mother believed that giving her such a name would "take her around the world."

Not that the attention that MP's name garners always benefits her. In reality, you could argue that the name has held her back. Speaking to the Californian, MP confessed, "People make such a big deal out of it, I couldn't get away from it."

Having a name like Marijuana Pepsi can attract some unwarranted attention.

Not even getting into how someone is supposed to get through middle school with a name like that, MP has had to stop putting her full name on her realtor posters.

I mean, if you saw a sign that said "Buy a house with Marijuana Pepsi," what would you do?

If you asked me that a couple of years ago, there's no question as to what I'd do. I'd have hauled it back to my student house and stuck it to my wall with some kind of strong adhesive that I'd pay for later. Nowadays, I'm less compelled to hoard funny stuff that I find in the street, but there's plenty of stoners out there that would do exactly that.

Other than on her real estate signs, Marijuana Pepsi proudly displays her full name.

Apparently, when she was at school, Marijuana Pepsi was asked by multiple teachers and peers whether they could call her "Mary."

A request that our girl Marijuana Pepsi flat out refused.

It wasn't just her school peers and teachers that didn't want to use MP's birth given name, bosses and friends have also taken issue with it. Marijuana Pepsi has been encouraged by countless people to get it legally changed.

But Marijuana Pepsi refuses to change for anyone.

Despite the comments, abuse, and general time-consuming explanations that MP has had to endure over the course of her life, she wouldn't have it any other way.

Marijuana Pepsi is not angry at her mom for choosing such a provocative name.

In fact, MP thinks that her name was the key to her success; she "credits her mom with making her the strong, balanced, entrepreneurial woman she is today."

So what do you reckon that MP's sisters are called?

Funnily enough, Marijuana Pepsi is the only one with an unusual name in her family. Her younger sisters were given completely ordinary names.

Let me introduce you to the family...

"This is my daughter Kimberly," I can imagine MJ's mom saying. "She plays the clarinet. Then there's Robin, she's off to summer camp next week. And oh, that's my oldest daughter, Marijuana Pepsi. She's going to get a doctorate one day."

What better way to defy the skeptics that mocked her name than getting a doctorate, one of the most respected titles, in front of her name? MP did just that.

As a college freshman, MP vowed to get a doctorate.

Whilst at college, MP vowed to get a masters degree and then a doctorate. She declared: "I'm going to be called Dr. Marijuana Pepsi!"

Her Ph.D. dissertation topic didn't stray far from her infamous name. The title of her dissertation was "Black names in white classrooms: Teacher behaviors and student perceptions."

MP is passionate about breaking down the stigma attached to students with "non-white" names.

Of course, Marijuana Pepsi is a bit of an extreme example, but her experiences inspired her to explore the mistreatment of African-American students with "unusual" names in the classroom setting.

Would Marijuana Pepsi encourage anyone to give the name to their kid?

Honestly? No. MP wouldn't recommend it. Just like in the Johnny Cash song, which ends: "And if I ever have a son, I think I'm gonna name him / Bill or George any damn thing but Sue."

If you wanted to get sponsored by a cannabis company though...

Apparently, Marijuana Pepsi is constantly getting "Marijuana producers try[ing] to friend her on LinkedIn."

So why was #Marijiunnapepsi trending?

Word spread that Marijuana Pepsi had received her Ph.D. in higher education leadership from Cardinal Stritch University in Wisconsin and the internet thought that it was pretty funny, given her unusual name.

So PepsiCo are definitely not making weed cola?

Yeah no, that's not happening. But, hey, what's wrong with drinking Pepsi and smoking weed the old fashioned way?

Or be more like Marijuana Pepsi and stay sober.

I've been sober for two weeks and have started to have dreams again, it's wild. On not drinking and laying off the weed, MP stated: "I feel great. I party with drunk people; you can't tell us apart." She did admit to having the "occasional fruity soft drink in an ice cream float,"  though. Steady on, Marijuana Pepsi, you'll have all the kids at it.