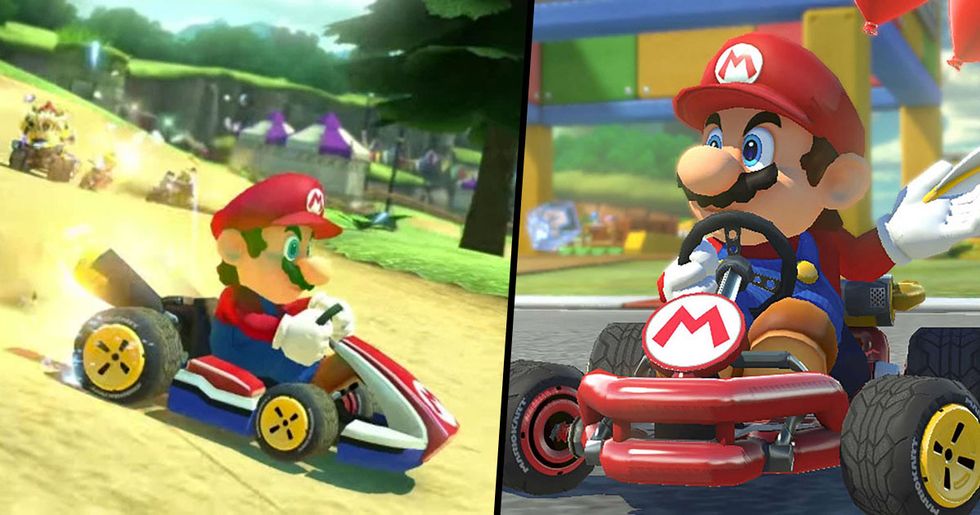 Mario Kart Is Coming to Your iPhone Next Week

Nintendo's Mario Kart really is one of those classic childhood games that you never get too old to play. Since it was first released in 1992, it's become a cult favorite among game-loving folk. After all, can you think of anyone who hasn't at least given it a go?

With its wacky racing tracks, some of which are very taxing (Rainbow Road, for instance...that sucker was very hard to complete without falling into the abyss), to the famed characters we all love, Mario Kart really has become the pinnacle of good-old classic gaming.

For years the racing game has only been available on Nintendo consoles, including more recently, the Nintendo Wii and Nintendo Switch. But as times move on, many of us only dreamt of a mobile version of the game.

And those prayers have been answered...the game is officially coming to app stores next week.

Keep reading to find out all the details on the new bite-size mobile version.

Not matter who you are, you've probably played Mario Kart at some point.

Nintendo's popular racing game headed to consoles in August 1992, under the original trademark Super Mario Kart, introducing the world to what would become one of the best-selling Super Nintendo Entertainment System (SNES) games of all time.

The game featured 8 of the Mario franchise characters.

The game has enjoyed enormous critical and commercial stardom.

The concept may be simple, but following its release, the go-kart-style game received a vast number of positive reviews and was praised for its presentation, innovation, and use of "Mode 7 graphics."

In fact, the game has been dubbed as one of the best of all time.

That's a pretty huge title to boast if you consider the staggering number of games available in the world. To say Mario Kart soared to popularity is probably an understatement.

In 2009, the game was re-released for Nintendo's Wii console.

And in the years since its gaming debut, there have been several more Mario Kart games released under the series, which all boast new and exciting tracks, graphics, and impressive features including, more recently, anti-gravity racing.

To date, fans could only play the game on Nintendo consoles.

After the gaming giant ended production on the popular Wii console 6 years ago, fans new to the hype are currently playing it on the company's latest console, the Nintendo Switch.

The latest game in the Mario Kart series was released in 2017.

Mario Kart 8 Deluxe is essentially a re-worked version of the previous Mario Kart games, but with added tweaks here and there as well as 6 additional playable characters, and an unlockable gold Mario costume...fancy.

Things can get super competitive when Mario Kart is involved...

From frantically throwing those banana's in the path of your pal and the great satisfaction in subsequently overtaking them, to the stress of accidentally looking at your opponent on the split-screen instead of your own character (we've all been there) there's nothing like a good old game Mario Kart.

But, seeing as we're in the era of mobile phones and social media, many of us have been waiting for a mobile version of the game.

Though nothing beats going back to your roots with classic console gaming, we anticipate many people have still been secretly wishing for a mobile app of the game.

And it seems it's actually happening...

This is not a drill. Mario Kart is officially heading to app stores, so we can play at our complete leisure, wherever, whenever.

Marking the tenth release in the popular franchise, it's the first time a Mario Kart game has gotten the mobile treatment.

Of course, Mario Kart Tour won't be exactly the same as its original console-friendly counterparts for the obvious reason that it's on our phones. But, the bite-size version will still allow us to play and compete against characters from the Mario world, including Princess Peach, Bowser, and Yoshi, as well as Mario himself.

Mario Kart Tour will follow the same formula as the previous releases.

Players will be able to race around courses inspired by the Mushroom Kingdom, the universe where most of the Mario games are based. Power-Ups will also still be available across each course, which give you special moves like a speed boost or an oil slick to trip up opponents.

Including the likes of the Eiffel Tower, Statue of Liberty, and Big Ben.

Karts from previous #MarioKart games are making a comeback in #MarioKartTour! How many do you recognize? You'll be… https://t.co/zUCLIHPcQD
— Mario Kart Tour (@Mario Kart Tour)1568509200.0

As reported by Express: "Mario and friends go global in this new Mario Kart as they race around courses inspired by real-world cities in addition to classic Mario Kart courses!" "These destinations will be featured in tours that rotate every two weeks! In addition to courses based on iconic locales, some of your favorite Mario Kart characters will get variations that incorporate the local flavor of cities featured in the game!"

Turn into a Bullet Bill and dash forward with all the speed of a bullet and crash any opponents that you hit! Even… https://t.co/c2U1ucvsWY
— Mario Kart Tour (@Mario Kart Tour)1568777911.0

But today, Nintendo released more vital details on the upcoming mobile racing game, including a release date and price.

With the game hitting app stores on both IOS and android on September 25.

And of course, many of us have been left wondering about price...

It's no secret that getting your hands on the original console versions weren't exactly on the cheap side, but luckily, it will be free to download the app, although it's likely we'll be greeted with in-app purchase options and upgrading fees.

We can't wait to start racing...

Hopefully, Mario Kart Tour will live up to expectations.

Take a look at the full game trailer below to see it in action:

*Adds release date to calendar* In other gaming news, keep scrolling to learn more about the controversial new Monopoly game, in which women get more money than the men.