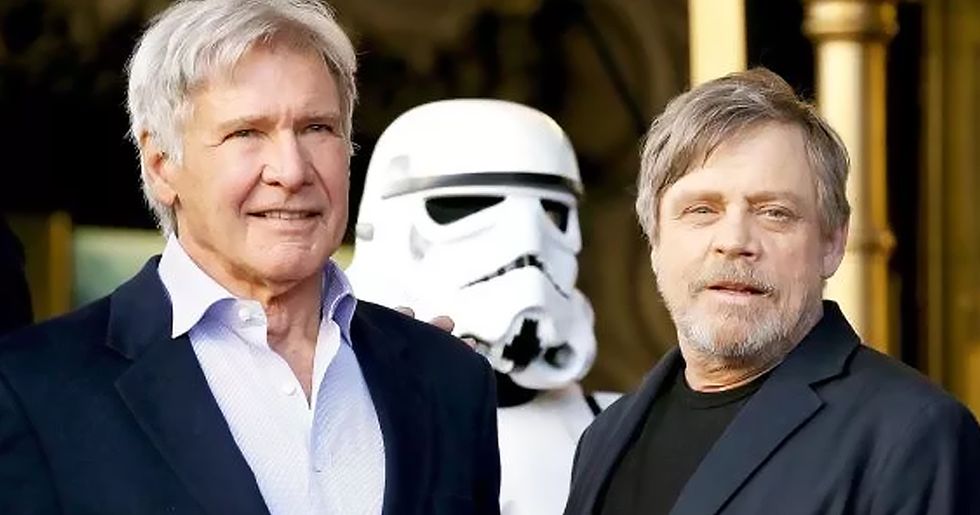 Having come out all the way back in 1977, Star Wars feels like it's always been a part of our lives. But there was a time when we didn't know what The Force was. When we had no idea what a Skywalker could be. When we didn't even know a laser sword would make sounds, let alone know how to make them yourself with our mouths while swinging around our mom's broom.

Star Wars, the epic space saga set a long, long time ago in a galaxy far away, is ubiquitous. And maybe that's why it's so fascinating to see where it all began. The actor who played Luke Skywalker, Mark Hamill, just tweeted out a video of his very first screen test with the actor who played roguish anti-hero Han Solo, Harrison Ford.

It's a look into a time when Star Wars was nothing more than an idea on a page and the iconic characters were still being formed. Check out the video to see a primordial version of cinema history.

Having not seen a Star Wars movie is so unusual that plenty of people list it under the "You might be surprised to know this about me" section on their online dating profiles. How many other franchises have that kind of power? I've never seen a Fast & Furious movie, but I don't have to warn people about that before we get into a relationship.

There are no kids who don't know Darth Vader.

The series is even multi-generational.

Every generation of kids has their Star Wars — parents have the original trilogy, early adults have the prequels, and today's kids are growing up with the Rey and Finn trilogy. But do your parents care about Fast & Furious? Absolutely not. (Okay, I'm done picking on Fast & Furious, I'm sure they're great movies. They have a lot of cars.)

No movie before the very first Star Wars, 1977's A New Hope, had so thoroughly captured the imagination of everyone who saw it. And how could it not? It was the first movie to feature laser swords.

A New Hope was, in a lot of ways, the first blockbuster, and it spawned a franchise that is as reliably profitable as any in entertainment. When you look at movie theaters today showing Spider-Man 6 and Harry Potter 19 and Jurassic Park Reboot 1 Part 2, you can thank Star Wars.

The series is chock-full of iconic characters, including Luke Skywalker...

Played by Mark Hamill, Luke Skywalker was the audience's avatar — a doe-eyed farm boy who wanted something more out of his life. And like all of us, he dreamed of becoming an outer space wizard.

Han Solo, the selfish and charismatic captain of the Millennium Falcon, was played to perfection by Harrison Ford. It's always struck me as one of those roles where an actor didn't have to act that much differently than themselves — both Han and Harrison made it clear that they were only involved with this particular star war because of the money.

It's almost hard to believe there was a time when we didn't know either one.

Just like Darth Vader, these characters are classics known to pretty much everyone who's ever heard of movies. I don't even remember the first time I saw A New Hope and met those characters — it feels like I've just always known them.

And yet, that time was documented, by way of this unearthed screen test.

What a gem here from @larwoolf. Can you share any color on this, @HamillHimself! 💯 #StarWars (cc: @frankpallotta) https://t.co/O2lcUKTrBH
— Carl Quintanilla (@Carl Quintanilla)1564244241.0

Star Wars had to start somewhere, and this is about as early a document of that beginning as we've got. Tweeted out by CNBC's Carl Quintanilla, this video shows the very first time Mark Hamill and Harrison Ford read dialogue together as their now-famous Star Wars characters.

Mark Hamill even retweeted it.

Clearly excited to see this moment from his path unearthed, Luke Skywalker himself Mark Hamill retweeted Quintanilla's tweet, putting the screen test before the eyes of the broader Star Wars fandom.

Apparently, it was the first time Hamill and Ford ever met.

Can you imagine meeting someone for the first time and reading this gibberish to each other? I mean, I can. I have a bad habit of talking about radiation readouts and the Empire on first dates.

And they're such cute lil' Star Wars babies!

In their most recent appearances in the new Star Wars trilogy, both Mark Hamill and Harrison Ford are old and grizzled, but here? Here, they look so young that at any minute a doctor could hold them upside down and spank them.

At the time of this screen test, neither actor had read the script.

Mark Hamill revealed in his retweet that he and Ford had only read the one scene they're performing here. They didn't have a clue what the rest of the movie would be like.

Hamill even asked George Lucas what the movie was supposed to be.

Apparently, George Lucas didn't think it was important his stars knew what sort of movie they were making. He brushed off their requests for more info, saying, "we'll talk about that later."

Even at this early point, Harrison Ford rules.

Remember, to Harrison Ford, these words are all gibberish. But he's saying them with such confidence. The guy is just oozing cool, even when he's talking dorky sci-fi specifics.

All the swagger and incredulity that made Han Solo Han Solo is on display in this screen test. It's incredible to see (and backs up my theory that Han Solo's reactions are more or less just Harrison Ford reactions.)

I don't know if "I'm beginning not to like you" is in the script, but it feels like it would be Harrison Ford's honest reaction to getting stiffed out of 5000 credits.

Shades of a future iconic ad-lib?

In the second Star Wars movie, The Empire Strikes Back, the script called for Leia to tell Han, "I love you" and for Han to respond with "I love you too." But on set, Harrison Ford ad-libbed a different response: "I know." So cool! Just so cool.

Actually, are all of Harrison Ford's best moments ad-libs?

Another one of the most famous Harrison Ford moments of all time originally called for his character, Indiana Jones, to have a knock-down, drag-out brawl with a sword fighter. But Harrison Ford was sick of acting that day and just pulled out his gun and shot him dead. It was hilarious, and it stayed in the film. Add that to the pile of evidence supporting my theory that Harrison Ford is not an actor, but is instead just a cool guy that sometimes gets filmed and called a different name.

The most bizarre thing about watching this screen test is seeing that, almost from the very start, these actors had figured out who their characters were and how they'd perform them. There's not a huge difference between the Luke in this video and the Luke in the first Star Wars.

And that's sort of the problem. While Harrison Ford went into Star Wars already a bonafide movie star, Mark Hamill... was in a little over his head.

It's time to face facts here — Mark Hamill is bad in A New Hope.

Listen, Star Wars is one of the greatest movies of all time, and I love it with my whole heart, and I'm so thankful it happened, but we have got to talk about how bad Mark Hamill is in that first movie.

His performance as Luke is either awkward and wooden, or annoying. Ugh, can't you just hear this little whiner complaining about Tosche Station and his power converters? Some hero.

Since the '70s, though, he's definitely improved as an actor.

When you're the star of one of the biggest movies of all time, you're going to keep landing work, whether your performance in said movie was good or not. And since he kept acting, Mark Hamill got better as he went.

Having voiced the animated Joker for DC since 1992's Batman: The Animated Series, Mark Hamill went way against type and played not a childish hero but the most twisted of villains.

And he took over another iconic voice role in this summer's Child's Play.

And he was great in The Last Jedi.

Returning to the role that made him a star, Mark Hamill again donned his Jedi robes for 2017's Star Wars: The Last Jedi. This time, though, he played Luke as a grizzled, surly hermit. And in another change from his original performance, this time he was good.

Malcolm Gladwell talked about the 10,000 hour rule —— if you want to be good at something, you have to do it for 10,000 hours. Mark Hamill's acting chops are a great example of that rule in action.

... in tandem with Luke's Force powers.