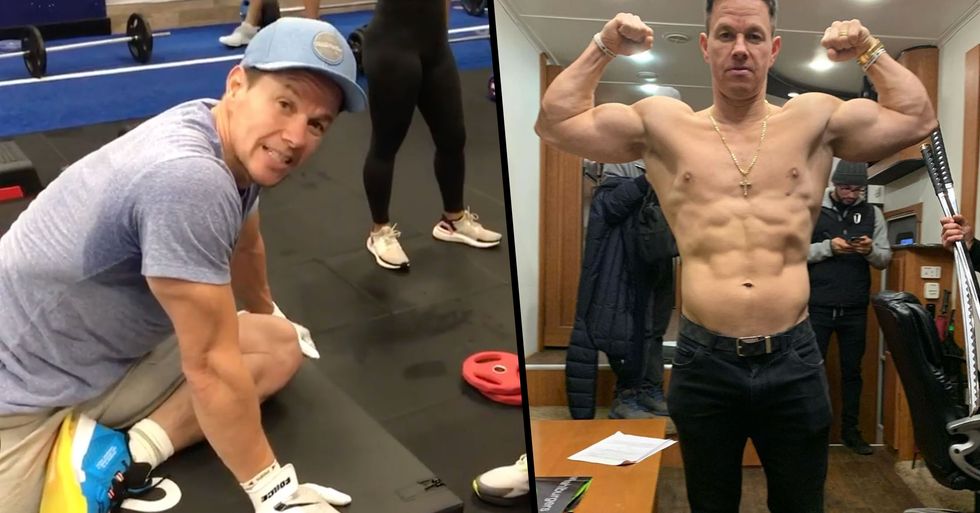 Mark Wahlberg Shows off the Results of His Training Routine

We all know that getting ripped takes a lot of hard work, dedication to the gym, and a type of willpower that many of us can only dream of having.

But there's one man who's well and truly dedicated to having a good bod... Mark Wahlberg. The actor has recently shown off the results of his insane training routine and fans have been left stunned.

Keep scrolling to get the low down on the drastic measures he revealed he takes to achieve his physique. You won't believe what time he wakes up...

Mark Wahlberg had a troubled start in life.

Born in Boston and the youngest of nine children,  the Hollywood A-lister dropped out of high school-aged fourteen before heading towards a life of crime.

The star engaged in a plethora of criminal activities...

Aged sixteen, the law finally caught up with him.

Wahlberg was convicted of assault and was sentenced to prison where he eventually served forty-five days.

Upon his release, he knew it was time for a turnaround...

So, with the help of his older brother Donnie, who was then apart of the popular band, New Kids on the Block, Mark began to carve out a music career for himself.

Soon after, "Marky Mark" was born.

In 1990, the star reinvented himself as "Marky Mark" and formed the band, Marky Mark and the Funky Bunch. While he didn't have the best singing voice in the world, his charismatic persona and good looks won fans over.

They actually had a couple of hits...

The band's debut album, Music for the People was released in 1991, giving them some success with the hit singles "Good Vibrations" and "Wildside." The album even went platinum.

Mark quickly cemented himself as a teen heartthrob.

And his physique and "bad boy" image gained him even more attention than his rapping.

He even got hired by Calvin Klein as an underwear model...

It wasn't long before Wahlberg abandoned "Marky Mark" for good...

The star ditched the recording studio for a career in the glitzy world of Hollywood.

Not many make the successful crossover from a music career into acting. You only have to look at the likes of Madonna, for example.

But boy, did it pay off.

He's clearly found his calling in life - even bagging a coveted Hollywood star on the Walk of Fame back in 2010.

His breakout role came as the lead in Paul Thomas Anderson’s Boogie Nights.

The role propelled him into Hollywood stardom - transforming him into one of the most sought-after actors in the business.

He's got a number of box office smash hits to his name. In late 2000, Wahlberg co-starred with Joaquin Phoenix and James Caan in the crime drama The Yards. Then, the following year, he starred in Rock Star, alongside Jennifer Aniston, and the title role of a remake of the cult classic Planet of the Apes.

Wahlberg has continued to thrive.

More recent additions to his acting catalog include the likes of Ted, Patriots Day, Daddy's Home 2, and Transformers: The Last Knight.

While his big-screen success draws in significant praise...

There's still one thing about the star that has kept people talking... his body.

The 48-year-old is insanely toned.

And many fans have been gushing over his tip-top physique.

But, it's no secret that getting so ripped takes hard work...

And after sharing pics of his shredded body on Instagram, floods of fans asked him how he manages to achieve his physique.

And his answer was truly shocking.

The star took to Instagram stories to give fans a breakdown of his entire day and people were left suitably stunned.

We've heard of getting up at 6 am, but 2.30 am seems a little excessive, if not impossible. He then allocates some "prayer time" before beginning his work out at 3.40 am.

Check out his full schedule below:

Who has the will power to get up so early? Insane. Mark is set to star in the upcoming Scooby-Doo movie. Keep scrolling to get all the details on the exciting new release.