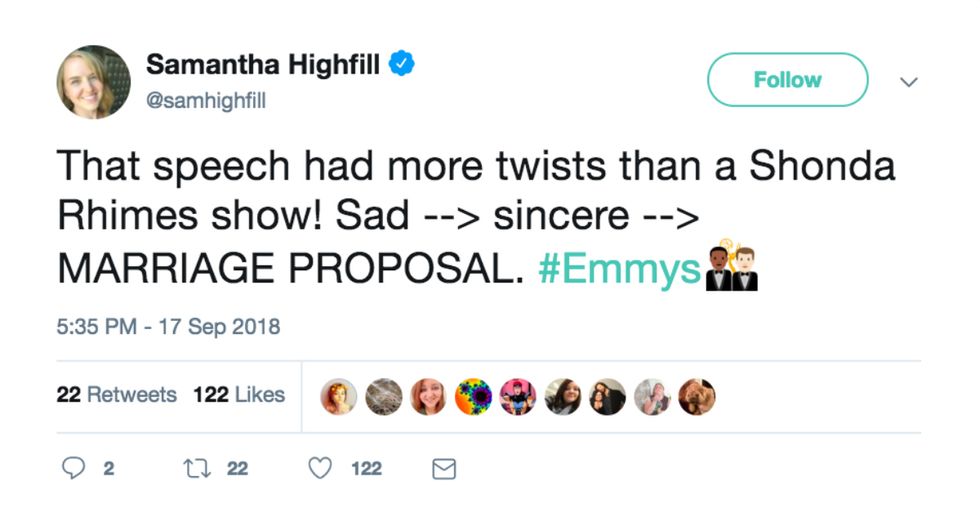 Guys, something crazy is happening tonight. There must be something in the water at the Emmys because the celebrities are going bonkers. This is more eventful than any other awards show in recent history, and that includes the year that Clint Eastwood yelled at a chair for an extended period of time.

There was an actual, real-live proposal that took place on stage after someone accepted an award. It was real. He must have planned it in advance, but I can tell you that no one else in that room, including his now-fiancée, knew what was going on. She was shocked, Leslie Jones' reaction is one for the books, and everyone else was also left with jaws on the floor.

Life in 2018 is a crazy roller coaster, but this was by far one of the most heartwarming, most positive moments so far. Seriously, you have to see the GIFs and the pictures. You won't be able to stop yourself from smiling.

Glenn Weiss just won the Emmy for outstanding directing for a variety special for his direction of the Oscars.

But he did something remarkable. He used his speech to propose to his girlfriend. It's not an exaggeration to say this speech brought the house down.

"Do you know why I don't like to call you my girlfriend?" Weiss said to his girlfriend from the stage.

I haven’t rooted so hard for straight people I don’t know since I got drunk at a bar in the Financial District and… https://t.co/0Y7OQPDsNp
— Justin Kirkland (@Justin Kirkland)1537234531.0

"Because I want to call you my wife." I know. Chills. Everyone in the audience collectively gasped, as I did from my couch at home. It was an incredible moment.

The audience watched as Weiss's girlfriend walked up on stage and accepted his proposal, along with his mother's engagement ring! He got down on one knee and everything. Can you imagine this being your proposal story?!

Obviously, the audience went wild for this.

I don't know if this is the first proposal in Emmys history, but it's certainly been long enough that the whole audience lost their sh*t. Seriously, I think my heart skipped a beat. It was so surprising and so sweet and so perfect.

I would like to hire Leslie Jones to just be around to react to things in my life because she's amazing. This will be a legendary Emmys moment for years to come. That's for sure.