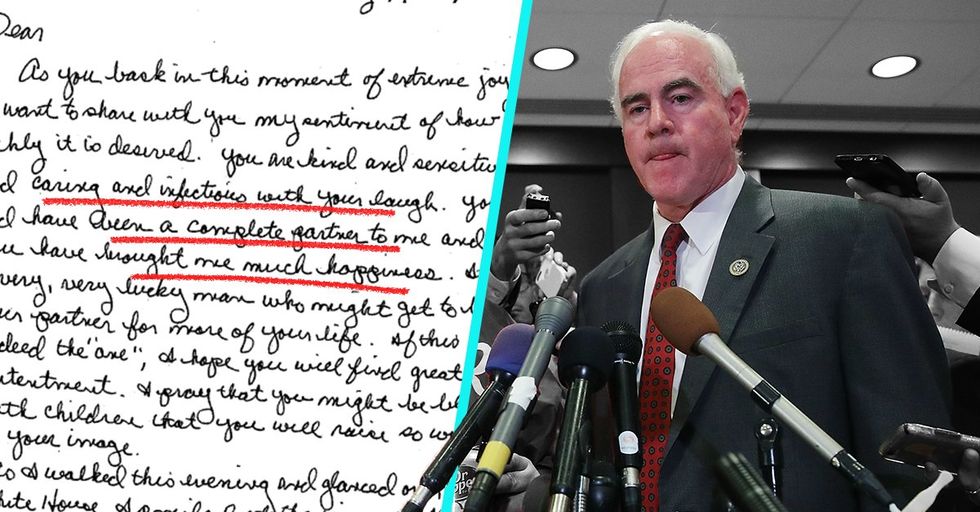 Rep. Patrick Meehan from Pennsylvania took a page out of the How Not to Defend Yourself Against Sexual Harassment Claims by saying that he viewed his much younger aide as his "soul mate."

It's a well-known book, but it barely has any pages left at this point. Predators like Kevin Spacey and James Franco and Michael Douglas have all taken pages out of it.

The congressman thought he'd take the Michael Douglas approach and address the accusations against him head-on.

Rep. Patrick Meehan said in an interview with the Philadelphia Inquirer that while he had developed deep "affection… https://t.co/G5phqseNqo
— CNN (@CNN)1516760283.0

The New York Times reported that Meehan had used tax-payer money from his office to settle a claim of sexual harassment by a much younger woman — one of his aides. To defend himself, Meehan thought it was a good idea to give interviews to the Philadelphia Inquirer and local NPR radio station WHYY.

Apparently, this guy wants all the details out on the table.

According to NPR, a spokesman for the congressman "said he wanted the woman to waive the confidentiality agreement she signed as part of her settlement in order to 'ensure a full and open airing of all the facts.'" But it's Meehan himself who decided to reveal the facts, and a lot of them are super creepy and don't help his case at all! Go figure! NPR reports that Meehan tried to "rationalize the way he pursued his staffer as somehow acceptable because they never had a sexual relationship and he felt a genuine connection with her. The married congressman and father of three denied any harassment on his part." He said he viewed this much younger woman as his "soul mate." Ah yes, the classic, "Well I didn't rape her, so it wasn't inappropriate" defense. Doesn't work, bub.

As part of his bizarre defense of himself, Meehan provided WHYY with a two-page love letter he wrote to his victim. It's bonkers.

As you bask in this moment of extreme joy, I want to share with you my sentiment of how richly it is deserved. You are kind and sensitive and caring and infectious with your laugh. You are and have been a complete partner to me and you have brought me much happiness. It is a very, very lucky man who might get to be your partner for more of your life. If this is indeed the "one," I hope you will find great contentment. I pray that you might be blessed with children that you will raise so wonderfully in your image. As I walked this evening and glanced over at the White House I smiled at the irony that on a day that I had to say "no" to the President and to the Speaker of the House, I got to say "yes" to you. I hope that the former will be judged as a vote of conscience and the latter as an expression of care.

There is a funny saying that "Man plans and God laughs." I hope that we each discover our paths through His light. From time to time, when I need perspective, I will sit quietly in the embrace of the Vietnam Memorial, the war I grew up with. I found surprisingly close together the names of [redacted] from Montana and [redactred] from Pa. (surprisingly). As I traced the names with my finger, I wondered who they were and why their plans ended so sadly and abruptly. As we travel our paths together, I am comforted that there is more unwritten.  Thank you for all that you have done for me, and for all you continue to do. I thank God for putting you into my life and for all that we have seen, and experienced and genuinely shared together.  With all of my heart, Patrick

Again, this is what Meehan himself presented as evidence that he was not sexually harassing this woman. What an idiot.

In his interview with the Inquirer, Meehan denied sexually harassing her, but he did cop to acting "selfishly" when she began seriously dating another man. He said that if he acted "rough" or lashed out at all, it was because he was stressed about difficult votes last year. This probably means it was a whole lot worse than he is admitting since it came from the same guy who viewed that nasty letter as totally innocent.

Meehan also publicized text conversations between them as "proof" that the feelings were mutual.

In them, he suggests going to get ice cream, which according to Meehan is code for "I love you and want to be with you forever."

And she responds with a winky face.

I don't know if you know this, but a winky face is a universal sign for "I am definitely into you in a sexual way and I want you, my boss, to keep pursuing me even though I make it very clear that I want you to stop." Just kidding. Obviously.

In one text message, she responds to his letter, which I guess he creepily left in her drawer for her to find:

I don't know about you, but I read, "Thank you for your very kind words and your friendship" as "I don't want to lose my job so I'm going to thank you for this creepy-ass letter and make it very clear that this is a friendship and nothing else." Now, I don't know her actual intentions with this message, but I am a woman, and this reads like classic deescalation to me.

Meehan told the Times that he had no idea that this woman considered his actions inappropriate: "That I would find later that that was not something that she was comfortable with, really hurts me," he said. Imagine how much she was hurt! Bet it was more than he was.

Ever the optimist, this debacle isn't deterring Meehan.

I remember a simpler time, when Patrick Meehan harassing his staff with creepy love notes would be a scandal instead of a Wednesday.
— 2021derella (@2021derella)1516821387.0

He insists that he will still run for reelection in November. Pennsylvania Congressman Patrick Meehan has just reached new levels of cluelessness, everyone, the likes of which have never been witnessed before.