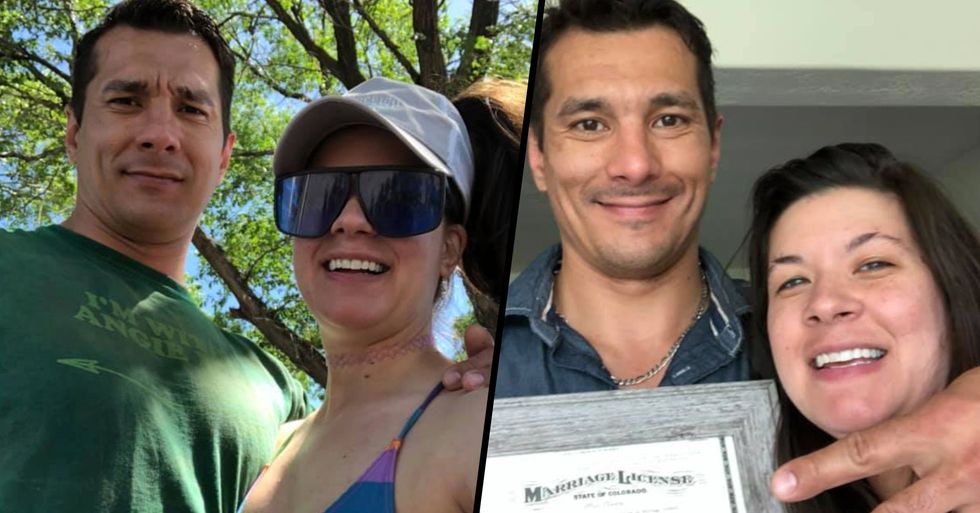 A married couple, who also happen to be cousins, are facing hefty jail sentences following the birth of their first child... For obvious reasons.

The couple, who insist that they have been in love their entire lives, are fighting for their rights to "unconditional love", and don't see anything wrong with having a baby together.

Keep scrolling to read the full details on this story of unconventional love...

Inter-family relationships have long been a debated issue in our country.

To marry, or not to marry your own cousin... That's the question many of us have pondered over the years.

Though most of us recoil at the idea of being intimate with our family members...

There are some people out there who just can't help but fall in love with their own flesh and blood.

Incest relationships have long been a taboo topic in our country...

Incest is defined as "sexual intercourse or relations between people who are very closely related."

And, as you probably know by now, incestuous relations are frowned upon in most countries and cultures. Obviously.

In most states here in the U.S. the marriage between 2 related people is illegal.

Incest is widely seen as a sex crime that is punishable by prison time or money fines.

But, there are some parts of the country that don't see anything wrong with a little bit of incest...

In the states of New Jersey and Rhode Island, incestuous relations between criminal adults are completely legal, though marriage is not.

And in other states, the marriage between related persons is permitted.

In New Jersey, incest is permitted as long as each person involved in the relationship is at least eighteen-years-old and, in the state of Ohio, incest is legally allowed provided that one party is not a parental figure to the other party. Sounds reasonable...

Michael Lee and Angela Peang, both from Eagle Mountain, Utah, look like your conventional married couple.

But, not all is as it seems.

The couple are actually cousins.

And we're not talking cousins second-removed or anything like that...

Creepy to most of us, I know.

But Michael and Angela are very much in love... Enough so that they have made it official by tying the knot.

Now, getting married was no easy task for the pair...

And they were forced to drive across state lines to Grand Junction, Colorado, last March so they could legally get married, as it would have been illegal for them to wed in Utah.

It was incredibly important to the couple.

And, when discussing their reasons behind their efforts, Angela told the New York Post, "We got married, not because we’re religious, but to protect ourselves legally. We also wanted to legitimize our relationship to console members of our family, hoping it would put them at ease."

Because, as you can all imagine only too well...

Their family hasn't taken it too well, and many have even gone as far as disown the pair entirely.

And, as well as losing half of their family...

They have risked an awful lot of legal complications in order to be together. In Utah, incest is a third-degree felony, instated in legislation due to the long-held fear of birth defects, and is punishable by a hefty prison sentence.

It stems from the long-held belief that birth defects occur in babies born to incestuous parents.

Research from Columbia University has found that first cousins share 12.5 percent of DNA, and the chances of their child having a genetic disorder are 4-7 percent, as opposed to the 3-4 percent chance for non-related couples.

But, these numbers haven't fazed Michael and Angie...

Because they are now expecting their first child together. And Angela, who is now 5 months pregnant explained how they had been extra cautious when conceiving, "We had to do our due diligence because everyone was saying to us: ‘No, don’t do that,’ and ‘It’s so risky and irresponsible.’ So we did genetic testing and found out it was OK for us to parent together. It was such a relief, now we are planning for a wonderful future together."

But, as expected, there is trouble in paradise.

The happy couple are facing up to 5 years in prison and a $10,000 fine for having their baby, which has been confirmed to be a boy, as it remains illegal for relatives to have intercourse in the state.

However, they aren't giving up.

They have set up their own foundation that aims to legalize the marriage and relations between related couples. The description on the Facebook page for The Michael and Angie Foundation reads: "We are first cousins from a large conservative family. We have loved each other our whole lives. We believe in the transformative power of unconditional love and acceptance. Join us if you want and need acceptance! We promote unconditional love."

And there's even a petition...

To legalize marriage between first cousins in their home state of Utah.

They're asking for people's help.

via: The Petition Site

"My first cousin and I have been in love with each other our whole lives but we are prohibited from marrying in the state of Utah where we live." Their petition has so far gained 1,556 supporters out of the aimed 2000. But Michael and Angie aren't the first couple to ruffle a few feathers in their quest for love... Keep scrolling to read about the "throuple", who claim that people are jealous of their unconventional relationship.