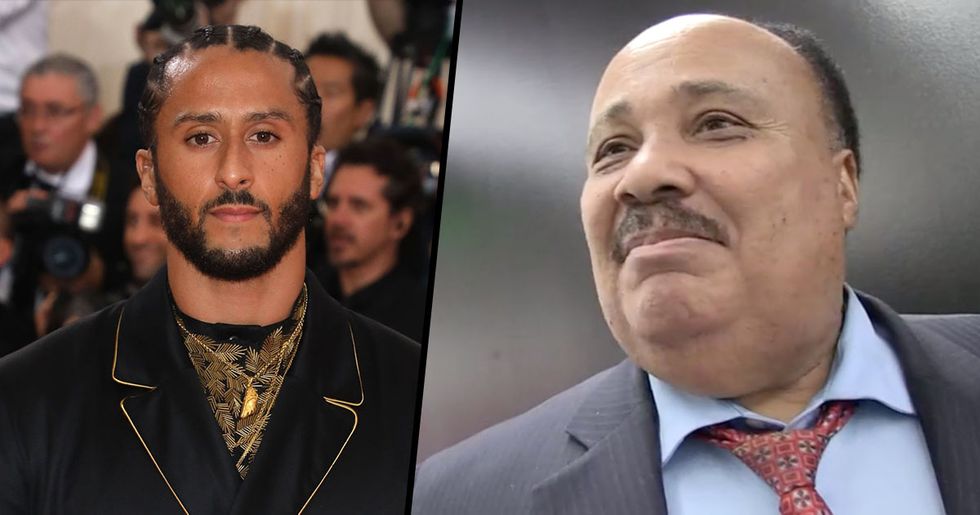 Colin Kaepernick is one of the more controversial figures in sports to date. Since he took the knee for the national anthem in 2016, he's been making more headlines off the field than on. And a major reason for this is that, in spite of the star's clear talent, he's been deemed too much of a liability, and no team will sign him.

Now an unlikely face has joined the debate. Martin Luther King III (the grandson of the civil rights legend) has claimed that, if fans made the right moves, Kaepernick's career could be rescued. And while this does seem like a nice idea, fans are feeling pretty skeptical.

Colin Kaepernick was born in Milwaukee in 1987.

He's a  former quarterback-turned-activist who is probably best known for protesting against the systemic racism against African-Americans.

He played college football at the University of Nevada. Kaepernick was then selected by the San Fransisco 49ers in the second round of the 2011 NFL Draft.

But that's not really what he's best known for.

In spite of his incredible talent and dedication as an athlete, Kaepernick really hit the headlines for political reasons.

Because he was one of the first to famously "take the knee."

In 2016, during a 49ers  preseason game, Kaepernick refused to stand for the U.S. national anthem and instead remained firmly on his knee.

His decision to kneel was a political protest.

Kaepernick wanted the world to know he did not agree with the ways police in the USA were treating African-American men.

Speaking in an interview in 2016, Kaepernick said: “To me, this is something that has to change, and when there’s a significant change and I feel like that flag represents what it’s supposed to represent and this country is representing people the way that it’s supposed to, I’ll stand."

Kaepernick explained he "couldn’t show pride in a flag for a country that oppresses black people and people of color."

And his actions attracted a massive amount of media attention at the time - which is still ongoing.

Initially, the NFL released a statement claiming that players were only encouraged, and not required, to stand during the national anthem.

But then they released a harsher (and more controversial) statement.

Here it is in full.

If any players chose to take the knee, the team would be fined and the decision would be upon the team leader whether or not they punish that particular player. For many, this felt pretty shady.

Kaepernick's career suffered as a result of his activism.

In 2017, Kaepernick became a free agent. No team would offer him a contract, which he believed was a direct result of his campaign.

However, his career has flourished in other ways.

In spite of no longer being able to play football professionally, Kaepernick has become something of a public figure, even landing deals with brands like Nike.

He's got friends in high places in terms of political activists, including When They See Us director, Ava Duverney.

But some fans want to see him back doing what he does best.

For socially consciously NFL lovers, the fact the Kaepernick continues to be boycotted by teams is something of an embarrassment to the sport.

And now one (particularly high profile) detractor has spoken out.

Martin Luther King III, grandson of his famous namesake, has spoken up against the NFL's treatment of Kaepernick - with a pretty innovative solution.

He claims fans should protest.

If we want Kaepernick back in the NFL, then King believes the power lies within our hands.

And really, his idea is quite simple.

"What would change it overnight is if the public decided, 'Okay, we're not going to watch,'" says MLK III.

"The industry did blackball him, which is not good."

"He certainly is one of the most talented quarterbacks even today, probably."

It's true, Kaepernick is a true QB talent.

And there are many teams in need. Pittsburgh have lost Roethlisberger, Saints are without Brees, and the Jets have lost Darnold and Siemian.

"There are times when you need strategic quarterbacks who have a proven record."

"And, certainly, Colin Kaepernick is one of those." But there's another King descendant who is not such a Kaepernick fan. Curious? Keep reading.