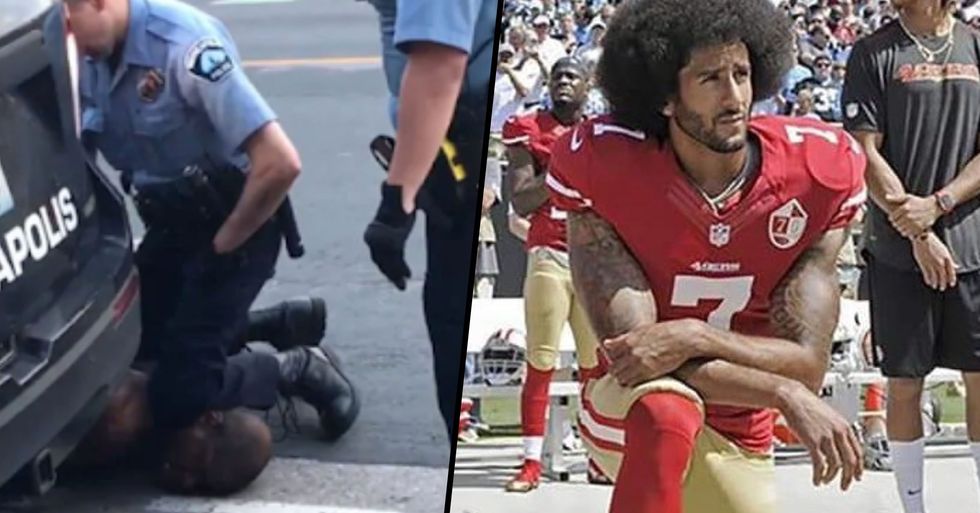 After several harrowing incidents in recent weeks, global outrage has been sparked about the way in which black people are treated by the police, here in America.

And now, Martin Luther King's daughter has shared a powerful message about the subject.

Police brutality is an ongoing issue.

Yet nothing seems to be getting done about this imminent problem in our country.

The tragic death of Ahmaud Arbery has made headlines in the last few weeks.

Arbery was shot dead by police in Brunswick back in February while he was jogging through the Satilla Shores neighborhood.

Cellphone footage showing the moment he was shot has prompted national outrage since it surfaced online...

A large crowd of protesters marched through the area where Arbery was killed and people have been demanding justice.

The pressure has been mounting on the police force to take action against the officers responsible for Arbery's death...

And even though the case is currently being investigated, attitudes clearly aren't changing.

Yet another tragic incident occurred in our country this week involving a black man and 2 white police officers.

It happened in Minneapolis on Monday, and passersby filmed 2 police officers "arresting" a black man for an assumed forgery incident.

Police found the man, who is believed to be in his forties, matching a suspect's description in his car.

When he supposedly resisted arrest, one of the officers got him on the ground and pinned him there by pressing their knee into his neck.

This position was clearly very painful for the man...

"Please, please, I can't breathe," he can be heard begging as the officers remain standing.

The man's nose begins to bleed...

"My stomach hurts. My neck hurts. Everything hurts," he moans as passers-by begin to gather and repeatedly tell the officer to stop leaning on him.

Multiple witnesses are arguing with the officers when the man starts to lose consciousness...

After around 4 minutes of the officer kneeling on him, the man is completely unresponsive.

An ambulance arrives, the paramedics check his pulse and move his body onto a stretcher - he was later pronounced dead in the hospital.

The man was later identified as George Floyd.

We have been informed that the man killed by Minneapolis police was named George Floyd. #JusticeForFloyd… https://t.co/SXKviWRmVB
— Ben Crump (@Ben Crump)1590502008.0

Whilst it remains unknown as to why he was being arrested, one thing is certain - this man did not deserve to die.

Meanwhile, the 2 police officers have shown absolutely no emotion, regret, or urgency.

And a huge amount of backlash has hit the headlines.

The shocking video has been shared on social media and it has sparked global outrage.

This breaks my heart. This man did not have to die. His death was captured on video. Both officers need to be charg… https://t.co/3vGSKDaXaf
— jurist_diction (@jurist_diction)1590506813.0

On Tuesday, the Minnesota Bureau of Criminal Apprehension joined the FBI in its investigation.

All body camera footage has been turned over to the BCA, which investigates most police shootings and in-custody deaths.

The officers involved have been put on paid administrative leave, per department protocol.

But many feel that more should be done.

Minneapolis Mayor Jacob Frey addressed the incident in a press conference on Tuesday morning, referring to events in the video as "wrong at every level."

"Being black in America should not be a death sentence. For 5 minutes we watched as a white officer pressed his knee to the neck of a black man. For 5 minutes," he said.

"When you hear someone calling for help, you are supposed to help. This officer failed in the most basic human sense. What happened on Chicago and 38th, this last night, is simply awful."

People all around the world have been left furious over George's unjustified death.

But many are feeling completely hopeless due to the fact that this blatant racism is happening more and more in our country.

When will this violence stop?

And when will police officers who have committed cold-blooded murder be properly convicted for their crimes?

So many famous faces and activists have shared their opinions on the tragic murder...

And one of those people is, of course, Martin Luther King's daughter, Bernice.

Bernice is the youngest child of the civil rights leader.

She was only 5-years-old when her father was assassinated, and it was because of this tragic event that she decided to work towards becoming a minister.

Bernice is now the CEO of the King Center, which was originally founded by her mother.

She has worked tirelessly throughout her entire adult life campaigning for "black lives matter" and it's safe to say that she is an incredible advocate for the cause.

Bernice has touched on George's death...

She wrote this on Twitter: "If you’re unbothered or mildly bothered by the 1st knee, but outraged by the 2nd, then, in my father’s words, you’re 'more devoted to order than to justice.' And more passionate about an anthem that supposedly symbolizes freedom than you are about a Black man’s freedom to live," along with these 2 pictures.

Colin Kaepernick lost his job because he knelt as a protest during the national anthem instead of standing before a game...

This protest was against the racism that is so evident in our country... so if Colin had to lose his job, why shouldn't the police officers who murder so many innocent black people every year?

It's not just a matter of police simply killing black people - it's the dehumanization and devaluing of black lives in our justice system overall.

Bernice received hundreds of thousands of responses to her tweet...

And everyone is pointing out the same thing - this police officer is a serial killer with a badge.

When will things begin to change?

@BerniceKing @yashar This is absolutely horrifying. I have supported @Kaepernick7 from the very beginning and conti… https://t.co/BFx5Xq11BT
— Cami Sheffield (@Cami Sheffield)1590537603.0

We hope that justice will be eventually served, and our deepest condolences go out to his family during this unimaginable time. Make sure to stay posted for further updates.