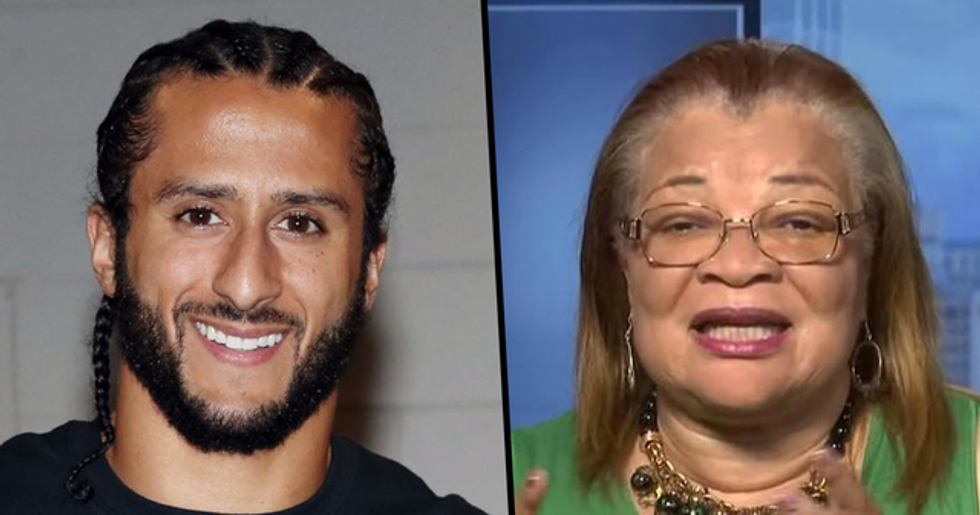 With Nike being one of the biggest sporting brands in the world, anything they do is documented worldwide and their products are forever flying off the shelves.

Their sneakers are top of the range, and many athletes and famous sports personalities are seen wearing Nike sportswear. The sport giant's recent plans to unveil a new sneaker didn't quite follow through, however, all thanks to the sportsman-turned-activist, Colin Kaepernick.

I'm sure you know the story by now. Kaepernick convinced Nike to halt their plans in launching their new product due to its use of the Betsy Ross flag because he believed that the traditional American flag represented slavery. The nation has since become divided on whether it was the right move. However, one person who has been especially vocal is Martin Luther King's niece, Alveda King.

The notoriously right-wing Trump supporter slammed Nike's decision to pull the sneakers, and she certainly didn't hold back.

Just for a little bit of background...

Colin Kaepernick, born in Milwaukee in 1987, is a former quarterback-turned-activist who is known for his political activism regarding systematic racism against African-Americans.

Kaepernick started his football career at a young age.

The thirty-one-year-old played college football for the University of Nevada. After graduating, he was selected by the San Fransisco 49ers in the second round of the 2011 NFL Draft.

So when Nike recently announced the launch of a new sneaker...

Kaepernick's influence over the sports giant was made very apparent.

The new sneakers were intended to celebrate the upcoming Independence Day...

Nike designed the sneakers in aid of this proud day, in which the sneakers would have sported an early edition of the American flag with thirteen stars from the American revolution, also known as The Betsy Ross flag. This flag was also a symbol in the American Nazi Party. It was intended to be a colorway of Nike's popular Air Max 1 sneaker.

Just as the sneakers were about to hit the shelves, Nike took them back...

According to The Wall Street Journal, Kaepernick complained to Nike and said that the flag that was featured on the ankle of the sneakers had a connection to slavery and he felt that it caused way too much offense. Nike had released a preview of the sneakers, but they have since very quickly taken them down from the internet - but, of course, people managed to get their screenshots in before they disappeared forever.

Nike had even begun sending the sneakers to retailers...

But they very quickly asked for the products to be sent back. A Nike spokesman told The Wall Street Journal: "Nike has chosen not to release the Air Max 1 Quick Strike Fourth of July as it featured the old version of the American flag."

Nike seemed to quickly realize what the Betsy Ross flag symbolizes for many people.

They removed the sneakers from the market within days of Kaepernick's complaint, but the people of America certainly weren't happy about this. Thousands of people took to social media to express their criticism over his actions and of Nike's removal of the sneakers. Pastor Greg Locke even tweeted a frustrated video captioned: "SHAME ON YOU NIKE."

Some users have lashed out personally to Nike...

I love how Colin Kaepernick and others are offended by the Betsy Ross American flag and make Nike pull the design b… https://t.co/AqwLCCGqnx
— Ryan Frank (@Ryan Frank)1562081710.0

This Twitter-user made the bold statement that Nike practice "child labor" and "terrible working conditions overseas," which is an extremely serious accusation to be making via social media.

Many have seen the retraction of the sneakers as a sign of disrespect.

Wow. @Nike’s an absolute joke for this. They pulled a shoe release because Colin Kaepernick is offended by the Amer… https://t.co/hvOKCencZP
— Robby Starbuck (@Robby Starbuck)1562078365.0

Robby Starbuck branded Nike as an "absolute joke," and called them out for "disrespecting our flag on Independence Day."

And one person who is particularly offended by the decision is Martin Luther King's niece, Alveda King.

"Who?" I hear you all ask. King, who is both a pro-life advocate and Republican pundit, appeared on Fox Business to voice her ever so important opinion on the matter.

She implied that Kaepernick didn't know who Betsy Ross was.

“I am not so sure brother Kaepernick even totally understands who Betsy Ross is," King said in an interview on Wednesday. “It’s kind of unfortunate that we are fighting over sneakers when we should be celebrating living in the best country on the planet."

King claimed that Nike is adding to the division of the country.

It's like she's oblivious to the division that our President has been creating for the past 2 years... "Unfortunately, Nike decided to join in a fight, in a struggle, that further divides rather than reconciles," she said. "I think love always wins the day, but we have to get there."

And, in true pro-lifer style, she had to bring up the issue of abortion.

Because we simply can't get enough of that nonsense, can we? King stressed that we, as a country, have more important things to be worrying about like, and I quote, "babies being aborted in the womb". Very relevant.

She also brought up Kaepernick's stance during the national anthem.

King suggested that her grandfather, father, and uncle all knew how to go about peaceful conflict resolution while gathering facts. "If you take a knee, do a prayer in the process," she said. "You educate your public, you examine your own soul, you sit down and you talk."

But Nike and Kaepernick still have their supporters...

Amongst the vast amount of hate and disagreement, Kaepernick has people agreeing with his views on using the Betsy Ross flag as fashion design, and many have praised him for standing up for his beliefs despite the hurtful comments that have been thrown his way.

Kaepernick's famous motto, "Believe in something. Even if it means sacrificing everything" has clearly been represented through his own, and Nike's, actions in this situation. Despite the backlash that he has already received, he believes that the sneakers represented something that was offensive, something that needn't be remembered, so he was simply standing up for what he believes in.