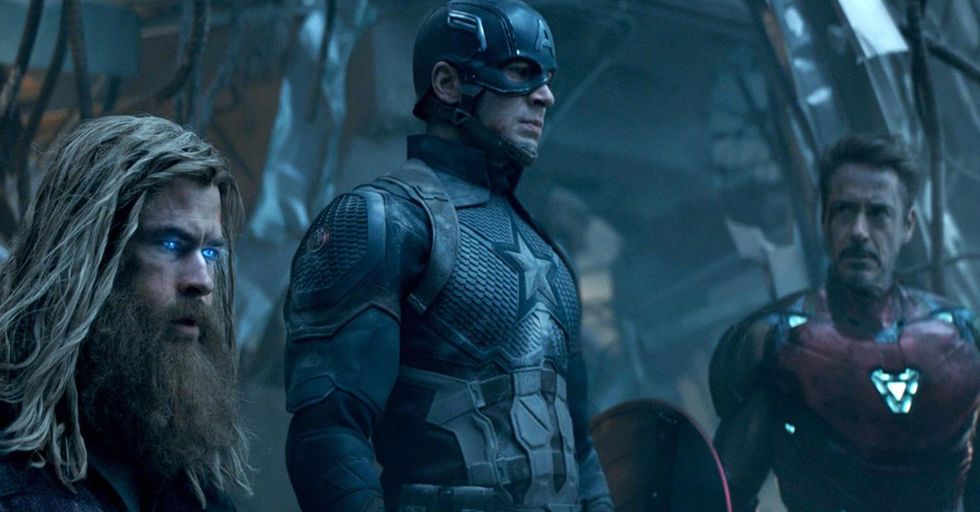 With the release of Avengers: Endgame, the original story that Marvel began back in 2008 with Iron Man came to a close. And with that story having been revealed to be about the search for the Infinity Stones — six all-powerful rocks that, when combined, can do literally anything — the end of that story meant the end of a lot of Marvel fan theories.

Speculation about the whereabouts of the Mind Stone, how Thanos would use the Stones, and what exactly they could do formed the basis of almost every Marvel fan theory. Now that we have those answers, it's time for some new fan theories. And baby, we've got 'em for you!

From who could be the next big bad of the MCU to the story beats Marvel may have been foreshadowing for years, here are some Marvel fan theories that will blow your mind.

We first met Spider-Man in the MCU during Captain America: Civil War when Tony Stark recruited him to fight Cap and his crew. But might Tony and Peter Parker have crossed paths before?

In Iron Man 2, there's a scene where Tony's doing his Iron Man thing...

In one of Iron Man 2's many action scenes, Tony has to hop into his armor and stop a rampaging Hammerdroid. It's some pretty standard superhero stuff.

... and he saves a little boy in an Iron Man mask.

Although, that little boy was doing a pretty good job himself. He stood up to a terrifying war-robot and raised a hand to him, just like his hero Iron Man.

Was that little boy Peter Parker?

Given how time passes in the MCU, this is about how old Peter would have been. Plus, this is a little boy with some innate bravery — the kind of bravery required to be a superhero.

Sure, he was already wearing an Iron Man mask and knew Iron Man's signature attack, but plenty of kids must have been worshiping Iron Man in the MCU. When we meet Peter, he's a fawning fanboy. Isn't that how we'd all act towards a superhero who saved us from a monster-bot?

And would've put him on the path to studying robotics at an early age.

The fact that Peter built his own spider-suit using advanced Stark technology in Spider-Man: Far From Home is just one example of Peter being an engineering whiz-kid. And if you've ever read Malcolm Gladwell (or listened to Mackelmore), you know it takes 10,000 hours to become an expert. That means Peter's been working with robotics since he was a little boy.

(And actually, Tom Holland has since confirmed this theory.)

Well-known for spilling Marvel secrets, Tom Holland has since said that, yes, that little boy in Iron Man 2 was Peter. We should point out, though — Tom Holland isn't a screenwriter for Marvel. Who knows if his off-hand comments are cannon. He could have just as easily pointed to a kid in a restaurant in Incredibly Loud and Extremely Close and said it was Peter if he wanted.

OUR NEXT THEORY: Hydra is the difference between the MCU and the Fox X-Men universe.

We know the real-life reason there are no X-Men in the MCU is because a different (at the time) movie studio owned the rights to the characters. But there is, potentially, a narrative reason we haven't heard from the X-Men: the clandestine organization once run by the Red Skull called Hydra.

In the MCU, Hydra supplanted the Nazis.

While Hydra was working with the Nazis during Captain America: The First Avenger, somewhere between Cap's deep-freeze and re-awakening in the present, Hydra surpassed the Nazis, meaning a lot of the horrors unleashed upon the real world by Hitler's regime didn't happen in the MCU, including the Holocaust.

And that changes a lot about Magneto's backstory.

The trauma of being interned at Auschwitz is what catalyzed Erik Lehnsherr's latent mutant power — control of metal. Furthermore, that experience informed his view on mutant rights — after becoming Magneto, Lehnsherr would fight violently to ensure the treatment he suffered would not happen to mutants.

Without the politically-charged battle between Magneto and Professor Xavier...

In the Marvel comics, Professor Charles Xavier, who founded the X-Men, clashed with Magneto over whether or not mutants should fight for equality with violence.

... being a mutant was less of an issue.

Without that blood-feud to turn mutants into a hot-button political issue, Magneto and the rest of the super-powered genetic abnormalities were able to just lay low. This theory supposes that there are mutants in the MCU, but they have no reason to step out onto the superhero stage.

Which leads us to OUR NEXT THEORY: Magneto did exist in the MCU.

If the MCU does have mutants roaming around in the shadows, could they have already played a role in events we've seen? This next theory supposes that that darn Magneto just can't stay out of the spotlight.

Debuting in Avengers: Age of Ultron, Wanda and Pietro Maximoff, AKA Scarlett Witch and Quicksilver, are Magneto's children... in the comics. We don't know a lot about their parents in the MCU.

But their father does get a shout-out.

Being able to control metal sure would help guard your children against a bomb.

Okay, imagine for a second that you have then power to control metal. Isn't a bomb going off in the house with your children a pretty good time to use it?

Our next fan theory: Galactus will be the next big bad.

With Thanos taken out of the picture — both by having his head chopped off and getting dusted — the MCU needs another all-powerful adversary to duke it out with the Avengers.

What is Galactus' whole deal, you ask? Well, he is a big human man, and he eats worlds. Traditionally a Fantastic Four villain, Galactus' arrival means everyone in the Marvel universe has to band together.

He was sort of featured in Fox's Fantastic Four: Rise of the Silver Surfer.

But he was a cloud. A cloud. The fun of Galactus is seeing a big giant man appear over the city skyline, and then having Wolverine and Captain America find ways to, like, climb up his body and attack.

But with Disney acquiring Fox, and therefore the Fantastic Four...

... Galactus is on the table for the MCU. And since Marvel is on the lookout for a new big bad, there is literally no bigger bad than Galactus.

Plus, he was already hinted at.

As The Collector was explaining the Infinity Stones in Guardians of the Galaxy, we saw some kind of being using the Power Stone to destroy a planet (which looked a lot like how Galactus would "eat" a planet in the comics). This creature had a staff that looked a lot like Galactus' helmet.

OUR NEXT THEORY: Groot is immortal.

And speaking of that first Guardians of the Galaxy movie, it was in that film that we met Groot, a powerful tree-man who can only say "I am Groot."

We got our first hint that Groot might be more than he seems in Captain America: The First Avenger.

When the Red Skull first stole the Tesseract in that first Captain America film, he made mention of a mural depicting Yggdrasil, the tree of life, guardian of wisdom. A tree that's also a guardian? Sound familiar?

Then, in the first Thor, we again hear mention of Yggdrasil.

With Yggdrasil coming from Norse mythology, it makes sense that Thor would bring it up too, but man. It's so important in the first Thor movie that they show it in the end credits. We hear Thor describe Yggdrasil as the tree of life, whose roots connect the nine realms.

In Thor: The Dark World, Heimdall even wears Yggdrasil on his armor.

These Asgardians are all about Yggdrasil!

Now, we know Groot can regenerate.

When Groot died saving the rest of the Guardians of the Galaxy at the end of the first film, a tiny piece of him (a branch?) regrew into a whole new Groot.

Is Groot a piece of the original tree?

We know Yggdrasil exists in between realms, but what if someone previously cut off a branch (arm?) and it grew into the Groot we know and love today?

His origin is listed as "X."

That would explain why, in this famous scene from the first Guardians, NOVA Corp. is able to trace the origins of every Guardian except Groot, listing is origin only as "X." Maybe it's because his origins are beyond the realm of science, and are part of a mystical life tree?

And our FINAL THEORY: for old time's sake, here's one more on the Infinity Stones.

Yes, the Infinity Stones have been destroyed — twice — but there's still a little bit of fan theory gold to mine out of them. We know what they did, but do we know what they meant?

The six Infinity Stones each represent one of the original six Avengers.

A thematic theory, but a theory none the less — what if the six Infinity Stones represented our original six avengers? The Mind Stone was Tony Stark, the greatest intellect in the MCU. The Power Stone was Hulk, because yo, that dude's powerful. The Time Stone was Captain America, a man who is outside of his own time. The Space Stone was Thor, who guards the many realms (which you can count as space). The Reality Stone was Black Widow, who is not only the only Avenger who could exist in reality but also bent reality to her will as a spy. And Hawkeye is the Soul Stone because a bunch of people say he's the "soul" of the Avengers. Admittedly, that part is flimsy.