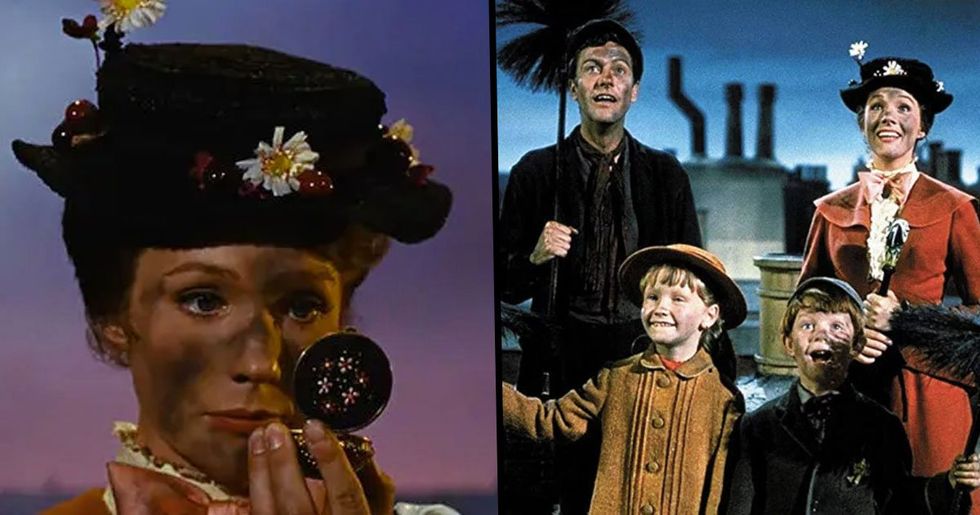 Mary Poppins Has Been Called Racist Because Of Its 'Blackface' Scene

We now live in a world of diversity, a world where two men can get married and where a person of African ancestry can walk down the street without fearing for his or her life. Yes, there are sadly still exceptions to this rule, but things have changed drastically in the last few years, with there now being a whole generation of people who call out something for not being ‘PC’. Although it may be assumed that certain elements of our world are off limits, that appears not to be the case. As was recently demonstrated when the cinematic classic that is Disney’s Mary Poppins, was dubbed racist for its use of blackface. Something that has led to a lot of people either raging at this opinion, or completely re-thinking their favourite childhood film.

Mary Poppins is a classic.

Say what you will about the infamous ‘mouse house’ but it is no secret that Disney has produced some of the greatest films in cinematic history. From the first ever feature length animated movie (Snow White and The Seven Dwarves) to the first live-action movie to integrate animation into the scenes (Song of the South). One of Disney’s most beloved films still remains to be 1964’s Mary Poppins.

The film was a universal success.

Of course, anyone who hasn’t been living under a rock, will know that Mary Poppins went on to achieve global success.

It was even nominated for an academy award.

Actually make that several, because the magical flying nanny was nominated for a total of thirteen Oscars.

Although the film not take home the award for Best Picture, it did see it’s star, Julie Andrews, take home an Oscar for her electric performance.

And the film's popularity has never faltered.

Even today the film remains to hold an outstanding 100% on Rotten Tomatoes, one of very few films to hold such an honour.

The film has been adapted into a musical.

Beyond this the film has also been adapted into a Broadway musical, one that will be returning to London’s West End at the end of this year.

And recently the film received a star-studded sequel.

The film’s popularity has only grown in recent months, especially with the release of it’s sequel, Mary Poppins Returns, which stars Emily Blunt in the primary role.

The film truly is a cinematic treasure.

The film is the perfect mix of live-action, animation, showtunes and moral lessons and it is no surprise that the film is still loved to this day.

Or so we thought?

However, it seems that not everyone is a fan of the beloved film. As was demonstrated recently by Professor Daniel Pollack-Pelzner.

Professor Pollack-Pelzner, who teaches English and Gender Studies at Linfield College, Oregon, found a specific scene in the film to be nothing but racist.

I’m sure many of you reading this article are now probably staring at your screens, dazed and confused. How can such a sweet little film be racist?

Well, our academic friend had this to say.

In one of his lectures, Pollack-Pelzner drew attention to the scene where Mary Poppins, Bert, Jane and Michael, walk across the chimney tops of London, covered in black soot.

Something he believed reflected the use of blackface.

Of course, being covered in soot means that the characters’ faces are black. In the scene, Mary even tries to wipe away the mess but only makes it worse, so instead she adds more soot to her nose and cheeks. Pollack-Pelzner analysed this scene as being a call back to the use of blackface – when a white performer would colour their skin black in an attempt to present themselves as a racial caricature.

So Pollack-Pelzner decided to write about his find.

In the New York Times,the professor published an article entitled ‘Mary Poppins and the Nanny’s Shameful Flirting with Blackface.’ Where he goes into detail about the film’s racist undertones.

In his article he wrote such things as this:

"The 1964 film replays this racial panic in a farcical key. When the dark figures of the chimney sweeps step in time on a roof, a naval buffoon, Admiral Boom, shouts, 'We’re being attacked by Hottentots!' and orders his cannon to be fired at the 'cheeky devils.'"

And now everything has changed.

In one fatal swoop, Professor Pollack-Pelzner has turned, what was once an energetic and bombastic musical number, into a controversial message on race and social hierarchy.

And fans have not taken it well.

Of course, many hardcore Disney fans have not reacted kindly to the professor and his academic analysis. With many stating that the world has gone too politically correct.

Some criticised the professor for his analysis.

Saying that he has too much free time on his hands.

Others believed that he was merely looking for some fame.

This would be a good way of ruffling some feathers after all.

Sadly this is not the first-time Disney’s portrayal of racial stereotypes has been brought to the public’s attention. The crows in Dumbo still remain to be a shadow of shame on Disney’s long history.

And again, some found the conversation too political.

Which is understandable, we now live in a world where many a performer is too scared to tread on the Tumblr generation’s toes.

But the hate did lead to something else.

After receiving nothing but negative reception for his article, Pollack-Pelzner took to social media to respond to the backlash.

"The chief reason I wrote this article was the hope that a Disney exec would read it, take another look at the forthcoming Dumbo remake, and ask if there was anything just a little bit racist they might want to rethink before it hits the big screen."

Which is somewhat admirable.

Although his intentions seem good, this does not change how negatively his article has been viewed by the fandom.

Even Pollack-Pelzner did not expect such hate.

“Here’s one thing I’ve learned about the alt-right, after I wrote this article and received a zillion hate messages in response: they sure like Mary Poppins!" Yes, we do!

But Disney doesn’t seem to care.

As of yet, Disney has not responded in any way to the article, and nor do they have to. They are Disney after all.

And Mary Poppins is more popular than ever.

With the release of Mary Poppins Returns, the world’s obsession with the flying nanny has only grown.

In fact, the recently-released sequel has also been praised by fans and critics alike, with Emily Blunt also receiving numerous nominations for her performance.

Although it still hasn’t reached the success of the original.

The new film may not have been successful as its predecessor but it has still shown two things. That people love Mary Poppins and that people love Disney.

And I’m sure in future another beloved film will fall under similar scrutiny, but if it still has its fans, I guess it doesn’t really matter.